Key Issues in the Peace Process 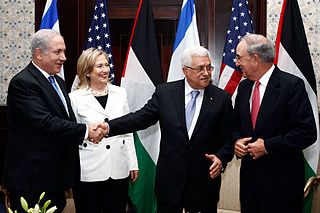 A negotiated two-state solution continues to be in the best interest of both parties. For the Palestinians, it would mean having, for the first time in history, their own state with the promise of international recognition and substantial economic development. For the Israelis, this solution would allow Israel to remain both democratic and Jewish, while diminishing or erasing the threat posed by continued terrorist attacks and delegitimization.

According to the United Nations Relief and Works Agency for Palestine Refugees in the Near East (UNRWA), there are now 5 million refugees eligible for their services in East Jerusalem, Gaza and the West Bank, as well as Lebanon, Syria, and Jordan. One third of these refugees continue to live in crowded refugee camps, as they have been denied citizenship by their host countries and face discrimination from the local populations.

Palestinians insist that the refugees were forced to flee and demand that they have a "right of return" to what is now Israel under UN General Assembly Resolution 194. Israelis note that not only did they take in and give citizenship to a nearly identical number of Jewish refugees that fled from Arab lands in the mid-late 1940s, resulting in a "swap" of sorts, but that most of the Palestinian refugees left willingly and thus gave up ownership of their land.

Jerusalem's many holy sites (to the Christian, Muslim and Jewish religions) make it the most hotly contested piece of real estate in the Middle East- Israelis claim it as their undivided capital, though this is not accepted by most countries. The site of the First and Second Temple is perhaps the most controversial of all- it contains the Western (Wailing) Wall, the last visible remnant of the Second Temple; the Al Aqsa Mosque, one of the earliest and most holy Muslim sites; and the Dome of the Rock, believed to be the spot from which Muhammed ascended to heaven, Abraham nearly sacrificed Isaac, and Jacob dreamt of angels ascending and descending a ladder to heaven.

Israeli settlements are towns and enclaves of Jewish civilian communities built, with government assistance, on land that was captured by Israel from Jordan, Syria and Egypt during the 1967 war. Such settlements currently exist in the West Bank and East Jerusalem (settlements in Gaza were evacuated under Israeli PM Ariel Sharon's orders in 2005).

While many Jewish Israelis living in settlements do so for financial reasons, the settlement enterprise was started by a group of Israelis who believed in a "Greater Israel" which stretched from the Mediterranean Sea to the Jordan River. Today, over 325,000 Jewish Israelis live in the West Bank and 190,000 in East Jerusalem. The many roads connecting the various settlements, some of which have now been accorded city status, and the hundreds of checkpoints around them create travel obstacles for the Palestinians and fragment the West Bank into tiny pieces.

These settlements are considered illegal under international law, and Palestinians have said that they will not continue direct peace negotiations until there is a building freeze in all occupied territories. However, Israel and the Palestinians disagree over the meaning of occupied territories and it is incredibly difficult within internal Israeli politics to enact such a policy or remove settlements permanently.

The Security Barrier (sometimes known as a wall or a fence, as it is each at certain points) was constructed around the West Bank by the Israelis to prevent suicide bombers and other terrorists from crossing into Israel after the Second Intifada. It has proven effective in preventing terrorism, however debate has been spurred about the actual location of the fence, which often extends deep into the West Bank beyond the green line and even beyond the generally agreed upon borders of a future Palestinian state.

The Israeli government contends that the fence route is designed solely for security reasons and can easily be moved once a negotiated peace deal is in place, and that it extends where it does in order to incorporate Jewish settlements into Israeli territory. Palestinians and other opponents of the barrier argue that such a route establishes a de facto border and, as the fence often cuts through existing Palestinian towns, separates Palestinians from their families and often their livelihoods as well.