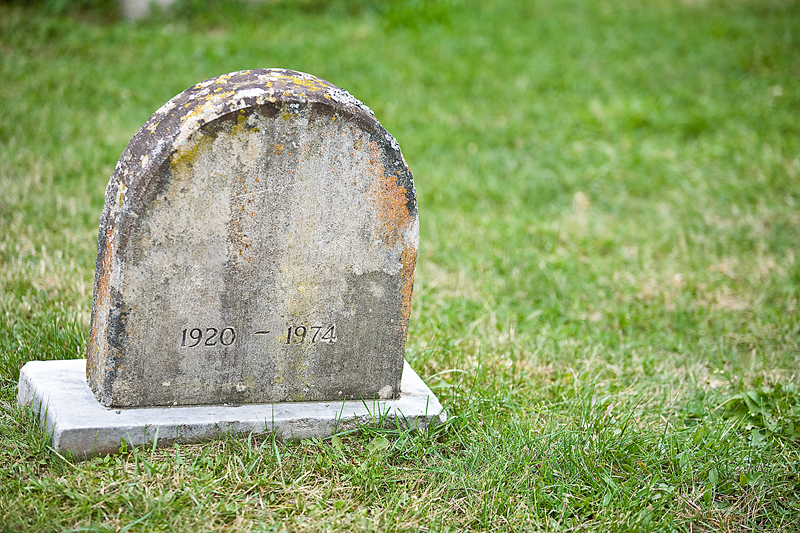 In the days when every illness posed a fatal threat, our ancestors practiced the ancient ritual of changing the name of an ailing family member in the belief that when the Mal'ach haMavet, the Angel of Death, arrived, no one present would be on his dreaded list. The angel would depart, death would be cheated, and a family would count their blessings. Today, of course, we attempt to defy death with medical marvels that transcend what anyone even a generation ago could ever have imagined--technologies that only postpone the inevitable. Eventually, we will find ourselves at the bedside of a dear one, our eyes focused on those numerical and mechanistic quantifiers of life--oxygenation, heartbeat, blood pressure--while we subconsciously await the arrival of the angel.

Physical decline, ominous symptoms, intensive care units, nursing homes, hospices...these stops and steps along the way test our mettle, our families, our faith. There are few things more painful than to watch a loved one slip away. Ask any caregiver, any spouse, child, sibling, or parent, and they will tell you that waiting for the other shoe to drop can suck the marrow from your bones. What may have been of earth-shattering importance yesterday is reduced to the trivial in the light of a fresh diagnosis.

And so begins a startling dance in which we let go and hold on, sometimes simultaneously. We perceive glimmers of hope, slight improvements accompanied by setbacks that eclipse the optimism so fundamental to our human and Jewish character.

Over time, a part of us--that place where our most private fears reside--begins to wonder: How long will this go on? How much am I going to have to suffer to make it through? I can't wait for it all to end! Then comes the guilt for harboring such thoughts. After all, something cosmic is taking place amidst the drugs and tubes: an entire universe of experience, thought, passion, love, accomplishment, disappointment, success and failure, laughter, and companionship is about to be extinguished. Impending death can be a relatively straightforward path for the patient; for family it is often a moral maze, especially when it becomes a crucible for unresolved familial conflict. Skirmishes do bubble to the surface at weddings and b'nai mitzvah, but in times surrounding death and dying family members are apt to fully "act out" repressed resentments.

Sylvia* was a sprightly, bright, well-educated 84-year-old woman. Until last year, she had lived a remarkably full life. Then, quite unexpectedly, her husband of almost sixty years died. Not long after, Sylvia suffered a series of physical setbacks culminating in congestive heart failure. Over the course of only several months, she went from being an entirely "with it" woman to a frail, dependent, sometimes disoriented and confused soul. The odyssey began at home, passed through an assisted living facility, and ended in a nursing home.

Sylvia's daughter, who lived nearby, watched her mother's rapid decline with alarm, but with an understanding rooted in daily exposure to her condition. In contrast, Sylvia's other two adult children, who lived long distances away, arrived only during times of crisis, one child feeling resentful and impatient, the other angry.

The resentful child had always felt cheated, deprived of an equal measure of parental attention. It was too late to articulate these sentiments to Sylvia, who now needed the attention and was certainly in no position to reciprocate.

The angry child--the "baby" who had received a great deal of attention--felt enormous guilt for having "abandoned" her mother. She lashed out at everyone--the physicians, the hospital, the nurses, the rabbi--accusing them all of indifference and neglect.

Everything came to a head when the cardiologist pronounced: "There is nothing more that I can do."

The daughter who lived nearby wanted only that her mother be spared unnecessary pain as nature took its course. By her lights, mom was ready.

Child number two--the resentful one--immediately inquired about a "do not resuscitate" order (DNR). While voicing concern about his mother's suffering, he wondered aloud if her morphine drip might be increased, knowing full well that the drug would compromise her respiration and hasten her death.

Child number three--the guilty one--insisted that everything possible be done to keep her mother alive.

And so began a primal negotiation among the siblings. It was not a question of "who shall live and who shall die" as voiced in our High Holy Day unetane tokef prayer, but how and when this passage from life to death would occur. Each of the adult children now played a supporting role in this final act, this denouement of their mother's life.

Sylvia had already slipped into unconsciousness when I arrived, my Rabbi's Manual in hand. The first child asked me to recite the vidui, the final confession. The third child was horrified at the thought and demanded a prayer for a refuah shelemah, a complete healing. The bedside conflict raged on even as I offered the prayer that as Sylvia's life came to a close, she would be blessed with a gentle and humane passing, to which the second child added: "...and sooner, rather than later."

At the funeral, the children sat apart, much as they had lived their lives.

Not every family finds itself in conflict for the same reasons. Sometimes the "conflict" has its origins in love, not fragmentation.

Robert* was a young physician. Three years ago, while holding a Torah during the chanting of Kol Nidre, he suddenly tired and had to pass the scroll to another temple leader. Startled by his weakness, he immediately underwent blood work and received a diagnosis of a particularly aggressive lymphoma. Every imaginable treatment was tried at a prestigious cancer facility until, finally, nothing more could be done. Only transfusions were keeping him alive, but prolonging his suffering. He pleaded for an end to the treatments. His wife, however, could not bear to bring her husband's life to a merciful end.

Finally, at Robert's request, a family meeting was called. On one side of the divide stood Robert's mother and wife. They pleaded the case for continued transfusions because any extra time was worth the suffering to them, and to the couple's three children--as long as breath was drawn and there was some recognition, some connection, as long as the children could venture into the bedroom and receive a kiss, a nod, a hand held, dad was still dad and he was still there.

The other contingent consisted of Robert, Robert's brothers, and me--his rabbi. We understood that the transfusions had decreasingly palliative value. Robert was tired, exhausted from procedures and invasive efforts to keep him alive. He was ready--as ready as a young parent can be--to go to his eternity. He understood his mother's entreaties, his wife's insistence, his children's fears and growing sense of loss--but he was not able to continue on. He also knew that these transfusions would likely result in a much more difficult death. As painful as it was, we agreed with Robert that "it was his time."

In this family no hidden agendas or unresolved conflicts hovered beneath the surface--only the heart-wrenching dilemma of both wanting to keep Robert alive and wanting his suffering to end. And so we spoke, softly, quietly, compassionately, about love, about holding on and letting go, about life and death as two sides of the same coin. I discussed how, according to Jewish tradition, while we may not hasten death, we also must not prolong it. This was not a debate; there were no points to be scored. This was about fulfilling Robert's wishes pegged to our Jewish sensitivities.

Robert's request was finally honored with grace, understanding, and equanimity. The transfusions stopped. Robert died five days later. At the funeral, the family sat together, much as they had lived their lives.

This month will mark twenty years since I sat at my father's bedside for the last time. I was the rabbi of a congregation in California; my parents lived in Ohio. I spent a good part of the end of that summer of '85 shuttling back and forth. The last visit--between Rosh Hashanah and Yom Kippur--is a memory etched in my consciousness. Dad was completely lucid, though he would periodically drift off to sleep. We reminisced about vacations, his parents, family history, laughable times, some poignant moments. We both said the "right" things to each other.

My father's cancer was so advanced that he refused all treatment, save for the analgesic. I confess, it wasn't easy to sit there, hour after hour. My father, once robust, strong, and vital, had turned into a mirror image of Gandhi. The container, the vessel, had become unfamiliar and alien. But the heart and soul were still front and center.

I was leaving the next morning and asked him to try to hold on until I returned after Yom Kippur. It felt like a selfish request, but he reacted with a weak smile and said, "I'll try." We embraced. I told him that I loved him, that he had been a great father. I made my way slowly from the room and I turned at the door. He blew me a kiss--the last movement of his hands I would ever see--and he said, "Jon, it sure goes fast."

The imminent and looming death of a loved one is an uncharted emotional precinct for us all. Some of us will be deeply aggrieved, some angry, some withdrawn, some sad, some relieved, some a combination of the above. There will be differences of opinion, driven by old animosities, shaped by real or perceived slights, guided by philosophies fashioned by ours and others' religious traditions. There may be one family member who, on the strength of having given greater time and care, will "take command," much to the dismay of others who also claim "ownership." The issue of inheritance--of who gets what and how much--can also color the scene.

What is often lost in this confrontation with human finitude is that the central character of this drama is our loved one, not us. The scenario of family members at each other's throats mocks the sacredness of the moment. While years of alienation, anger, estrangement do not evaporate overnight, hatchets must be set aside. This is not the time to be an am kasheh oref, a stiff-necked people. This is instead a time for a hierarchy of priorities that allows, with some visionary alchemy, our narcissistic impulses to surrender to the precious values of forgiveness, love, respect, dignity, decency, compassion, and selflessness.

We are taught in Psalm 90:12 to number our days so that we might receive a heart of wisdom. Here's the real wisdom: End-of-life issues are never simple. They are complex and unsettling, sometimes discomfiting and contentious. In this age of managed care, we often find ourselves acting as advocates for our loved ones, lest their treatment "by the book" fall short of what we believe they deserve. At some point, hope and reality collide and our emphasis shifts from being champions of every imaginable medical course to becoming partners with the Holy One in devising a gentle and humane path leading to the shelter of God's wings. While this elemental drama unfolds, we may find ourselves buffeted by currents long submerged but still powerful and diverting. Our task is to navigate these waters with a singleness of purpose, shaped and molded by our values.

I think of my dad's last words to me. They have become, after twenty years, more than just an astonished observation about the swift spinning wheel of time. Life, he was saying, is both precious and finite. Make sure that the things you do move in cadence with your Jewish heart. And please do not presume that these things can be postponed or avoided, because it sure goes fast. n

* All case histories are composites, and no real names have been used.