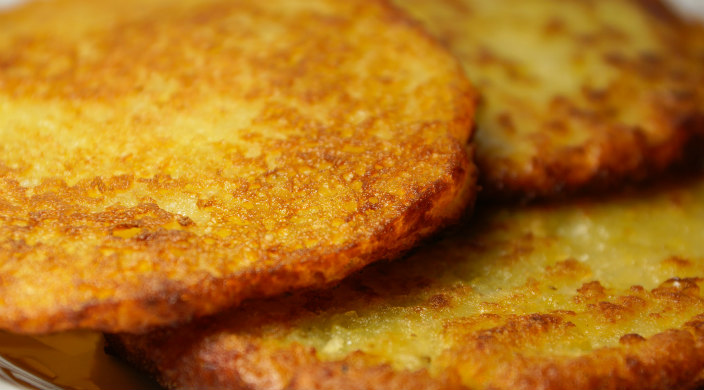 Hanukkah, the Festival of Lights, commemorates the victory of Judah Maccabee and his followers – the Hasmoneans – over the army of the Syrian Greek king, Antiochus IV. As the story goes, when the Jews recaptured the Temple in Jerusalem, they found it to be defiled and all the oil pots for lighting the ner tamidner tamidנֵר תָּמִיד"Eternal light;" the light that hangs above the ark in every synagogue; symbolizes God's omnipresence in our lives.  were smashed. Only one pot of sacred oil, enough for one day, was found. Miraculously, the oil burned for eight days, long enough for more oil to be made. In honor of this miracle, Jews light a special menorahmenorahמְנוֹרָהSeven- or nine-branched candelabra; commonly refers to the nine-branched Hanukkah lamp; plural: menorot.  called a hanukkiyahhanukkiyahחֲנֻכִּיָּהNine-branched candelabra used during Hanukkah – eight branches for each night of the holiday, plus another branch (often taller, central, or more prominently displayed) for the shamash (helper) candle, which is used to light the others.  for eight days, and foods cooked in oil are eaten during the holiday.

Latkes have become the cornerstone of many Hanukkah celebrations. Interestingly, latkes have been around only since the late 19th century, when potatoes began to be grown in earnest in eastern Europe. When eastern European Jews came to America, they brought their recipes and traditions with them.

Like matzah balls on Passover, latkes are made from many dearly held recipes. One thing all Jews agree on (a miracle itself!) is that the finished latkes must be crispy on the outside and soft and creamy on the inside. How to prepare and cook them to achieve this result is a wholly different matter.

1. Choose your potatoes, and start shredding.

Russet (or Idaho®) potatoes are the most popular choice for making latkes since they have the highest starch content. Once you’ve selected the potatoes, they must be shredded.

Cookbook editor Olga Massov disagrees, insisting that hand-grating is the only way to go for truly crispy latkes – and that it takes less than a minute to grate a potato.

2. Get rid of the moisture.

Whichever method you use for grating the potatoes, chefs and Jewish grandmothers agree it’s vital to get rid of the moisture, the enemy of crispy latkes.

Drain the potatoes by placing them in a cheesecloth or kitchen towel, wrapping the ends together, and squeezing out the water. Alternately, wrap the corners of the cloth around a wooden spoon and twist until the water floods out.

Onions – which should be chopped, not grated – also should be well drained. Grated onions release more moisture into the latke batter, which prevents even browning.

Flour and an egg are often used to help bind the pancake together. Max Falkowitz recommends matzah meal instead of flour, insisting it binds the potatoes without making them heavy. Laura Frankel, author of Jewish Slow Cooker Recipes, suggests using only the egg white. This method will make the latkes crispy, instead of cakey, and enable them to be reheated successfully in the oven – without becoming soggy.

4. Don't forget about the oil!

The oil in which latkes are cooked also is a source of much discussion. Most cooks use canola or vegetable oil to fry latkes. Some recipes call for olive oil, which gives latkes a distinctive flavor, but is difficult to keep at the proper temperature without it turning bitter. One recipe I found calls for clarified butter instead of oil, but butter burns too quickly.

Olga Massov offers the best trick to achieve crispy latkes: After draining the water from the potatoes, wait for the starch to separate, and add it back into the latke batter. According to Massov, it’s this starch that creates latkes that are brown and crispy on the outside, and soft and fluffy on the inside.

Of course, there are countless variations on traditional potato latkes – and the recipes to make them. There are recipes for apple latkes and sweet potato and carrot latkes, not to mention this cranberry pear sauce, a twist on applesauce, which (along with sour cream) is a traditional accompaniment for latkes.

8. Try a few alternatives to latkes, too.

The story of Judith, a widow in Bethulia during the second century B.C.E., also is associated with Hanukkah. As the Assyrians, led by General Holofernes, invaded the small town, Judith snuck into their camp, where the general, struck by her beauty, invited her to a banquet in his tent. There, Judith fed him salty cheeses and wine to quench his thirst. When he was so drunk that he fell asleep, she used his sword to cut off his head, saving Bethulia and its people. A recipe for lemon ricotta pancakes, an updated version of classic kaese latkes, hearkens back to Judith and her faith and bravery, which like latkes and the oil they’re fried in, all are facets of the Hanukkah story.

Whichever latkes you choose, have fun making them. I hope they bring you a celebration filled with light, joy, laugher, and lots of latkes!

Latke Recipes to Try This Hanukkah

What kind of latkes are you making this holiday season? We'd love to see your photos! Find us on Facebook, Twitter, or Instagram, and don't forget to check out the rest of our recipes for a festive Hanukkah.