Women Facing Abuse as Suffragists and in the Torah 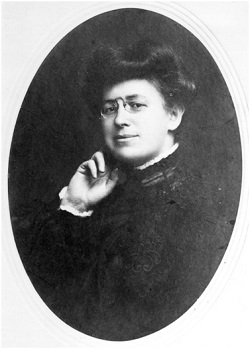 Did you know that Gloria Steinem’s grandmother, Pauline Perlmutter Steinem (1866-1940) was not only a sisterhood president of her Reform congregation, but also a suffragist? The legacy of activism in the Steinem family, paired with lessons learned from Parashat Naso, as we will see, reminds us to be on guard against gender-based discrimination meant to preserve an unjust status quo.

Gloria Steinem’s “Mama Einie,” as she called her grandmother, was born in Poland to Bertha (Slisower) and Hayman Perlmuttter, a cantor. After training as a teacher in Bavaria, Pauline Perlmutter married Leo Steinem in 1884. The couple immigrated to his hometown of Toledo, Ohio after the birth of their first son. By all accounts, Pauline was an admired housewife who kept a kosher home and raised four sons, the youngest of whom was Gloria Steinem’s father, Leo.

Pauline’s domestic responsibilities were allowed to spill into the public sphere, like other middle-class women of her generation, providing her with a roster of volunteer activities geared toward nurturing the larger Jewish community. Over the years, besides leading the local sisterhood at Temple Shomer Emunim, she served as president of the Jewish free loan association and the city’s section of the National Council of Jewish Women.

What Gloria Steinem came to discover only many decades later is that her grandmother was also an early and ardent feminist who worked assiduously to get women the vote. When people asserted that “women cannot succeed in certain fields,” Pauline replied:

How do we know what women can do, when we have never yet allowed them to try? No man knows what woman would do, if she were free to develop the powers latent within her, nor does she herself know as yet. (Jacob Rader Marcus, ed. The American Jewish Woman Documents [Hoboken, NJ: Ktav, 1981] p. 700) 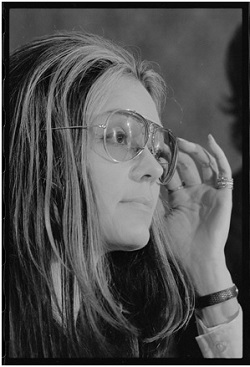 Gloria Steinem learned of her grandmother’s active role in the suffragist movement from feminist historians as they began to unearth and add women’s narratives to the historical record in the 1970s, and this new knowledge strengthened her Jewish identity. She composed a biographical entry on her grandmother for the Encyclopedia of Jewish Women, and after meeting with a scholar at the Jewish Women’s Archive, she agreed to appear in an exhibit about Jewish feminists.

Pauline Perlmutter Steinem was animated by her feminist beliefs and played an active role in the struggle to pass the 19th Amendment. She traveled to Switzerland in 1908 as a delegate to the International Council of Women, a worldwide women’s advocacy organization established in 1888 to mark the 40th anniversary of the first Women’s Rights Convention held in Seneca Falls, NY. Closer to home, she became president of the Ohio Woman Suffrage Association and wrote to suffrage association chapters across the state, urging them to campaign for pro-suffrage delegates to the 1911 constitutional convention.

When the 1912 amendment failed, she marched with thousands in the Women’s Suffrage Parade in Washington, the day before President-elect Woodrow Wilson’s inauguration. (Sound familiar to any pink-hatted marchers of January 21, 2017?) On June 16, 1919, Ohio became the fifth state to ratify the 19th Amendment. It would take 14 more months and 31 additional states for the amendment to become the law of the land.

Meanwhile, Pauline encouraged women of Ohio to head to the polls despite intimidation tactics they were encountering. As Gloria tells it:

“[M]any resented the newly won right [of female enfranchisement] in Ohio. To frighten women out of the ‘unnatural’ act of voting, gangs of men and boys surrounded the polls, and indulged in what we would now call sexual harassment. My grandmother … organiz[ed] women to go to the polls — together.”

During the long struggle toward passage of the 19th Amendment in the United States, not only men, but women, too, opposed female enfranchisement out of fear that it would upend the “natural order” of society. The so-called “Antis” argued that political equality between the sexes would dilute valuable gender differences necessary for the common good. They presumed that women, because of their “innate” maternal qualities, were better suited for carrying out responsibilities at home and should therefore stay out of politics altogether. Propaganda depicting severe punishments for women who “misbehaved” began to appear with some regularity.

The suffragists of Pauline Steinem’s generation were hardly the first women to be warned against trespassing patriarchal boundaries through the use of terrifying images meant to deter them.

This week’s Torah portion, the first part of Parashat Naso, delineates the procedure to be undertaken for a “wayward wife,” who is known in Hebrew as a sotah because she has tisteh, “gone astray” (Num. 5.12). If her husband so much as suspects her of adultery, she is subjected to an elaborate ritual that is not juridical — no witnesses, no testimonies, no evidence — but a shockingly primitive trial by ordeal. The sotah appears publicly in a humiliated state before a priest with an offering of barley and then drinks bitter waters that contain dissolved sacred parchment and dust from the Tabernacle floor. If she is innocent, there will be no reaction. If she is guilty, her stomach will swell, and she is unlikely to survive the ordeal. The Torah summarizes (Num. 5:29-31) the ritual:

… when a wife goes astray while married to her husband and defiles herself, or when a fit of jealousy comes over a husband and he is wrought up over his wife: the wife shall be made to stand before the Eternal and the priest shall carry out all this ritual to her. The husband shall be clear of guilt; but that wife shall suffer for her guilt.

Let there be no mistake about it: religious instruction here protects ingrained social mores.

For us today, the image of the biblical sotah — like the abuse endured by Pauline Perlmutter Steinem and her female companions at the polls — calls out to us to recognize and stand against gender-based discrimination that perpetuates unjust practices. Female models from the past do more than fill out the historical record. As Gloria Steinem put it, “Each others’ lives are our best textbooks.”

In the end, Pauline Perlmutter Steinem’s efforts to band together with other women paid off. She became the first woman elected to public office in Toledo.

Rabbi Carole B. Balin, Ph.D. is the first woman to earn tenure at her alma mater, HUC-JIR’s NY Rabbinical School, where she is Professor Emerita of History. She serves as chair of the Jewish Women’s Archive board and publishes widely on gender and the Jewish experience, including Sisterhood: A Centennial History of Women of Reform Judaism. She is currently writing a narrative non-fiction work on bat mitzvah, which will appear in 2022. To share your bat mitzvah story, visit her website.

Bias of Any Kind Is Wrong
Davar Acher By:
Rabbi Edwin Goldberg

In Rabbi Balin’s d’var Torah on Parashat Naso, the ancient rite of sotah is correctly labelled as unjust towards women. Moreover, the superstitious practice of using a mystical rite to produce judicial decisions is also in general unethical. As Balin declares, “… religious instruction here protects ingrained social mores.” In addition to Gloria Steinem, since the 1970s there have been a number of Jewish women feminists who write from a perspective of serious Jews confronting the innate sexism of religion in general and Judaism in particular.

A famous example is Dr. Judith Plaskow, who in 1971 delineated the problem of male perspectives in transmitting Jewish tradition throughout the centuries. In her landmark book, Standing Again at Sinai, Plaskow reflected the “hermeneutics of suspicion” in which the only way to accept the teachings of Jewish tradition was to first pass them through a critique that called to account the ingrained prejudices.

To be clear: the point of such feminist critique is not to “level the playing field” by making men and women equal, or even by making Jewish tradition gender neutral. The goal must be to question the very hierarchies of power in the first place. In other words, the old system was not only unfair to women. The old system of unequal power perverts the entire system.

Long after the Torah portion dealt with the “suspected woman” the rabbinic law code of 1800 years ago, the Mishnah, offers an important insight. We read in Mishnah Sotah 9:9:

When adulterers multiplied, the ceremony of the bitter waters ceased and it was Rabban Yohanan ben Zakkai who discontinued it, as it is said, “I will not punish their daughters for fornicating, nor their daughters-in-law for committing adultery, for they [the husbands] themselves [turn aside with whores and sacrifice with prostitutes]” (Hosea 4:14).

As the Mishnah teaches us, in an era when many men were committing adultery, the water-drinking ceremony was discontinued. This makes sense: If a man is also engaged in illicit sex with other women, he cannot use the sotah ritual to test his own wife. In an age when all human beings come up morally short, one cannot focus on one gender. From this, it is possible to derive the lesson that the answer to Jewish bias against women is not to ramp up the bias against men. It is to recognize that bias of any kind is wrong. Men and women should be called by the same titles. They should be paid the same wage for the same job. And our notions of God need to mature beyond king or queen.

Religion has often been used to justify inequality. Our task is to refine religion so that the only “ingrained social mores” of the future are ones that honor human equality and an image of the Divine based on harmony not hegemony.

Rabbi Edwin Goldberg has a Doctorate of Hebrew Letters from Hebrew Union College-Jewish Institute of Religion. He is the rabbi of Congregation Beth Shalom of The Woodlands in The Woodlands, TX.

When do we read Naso I