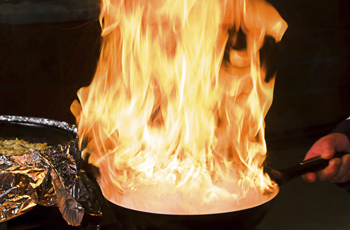 9:1] On the eighth day Moses called Aaron and his sons, and the elders of Israel. 2] He said to Aaron: “Take a calf of the herd for a purgation offering and a ram for a burnt offering, without blemish, and bring them before the Eternal. 3] And speak to the Israelites, saying: Take a he-goat for a purgation offering; a calf and a lamb, yearlings without blemish, for a burnt offering; 4] and an ox and a ram for an offering of well-being to sacrifice before the Eternal; and a meal offering with oil mixed in. For today the Eternal will appear to you.”

5] They brought to the front of the Tent of Meeting the things that Moses had commanded, and the community leadership came forward and stood before the Eternal. 6] Moses said: “This is what the Eternal has commanded that you do, that the Presence of the Eternal may appear to you.” 7] Then Moses said to Aaron: “Come forward to the altar and sacrifice your purgation offering and your burnt offering, making expiation for yourself and for the people; and sacrifice the people’s offering and make expiation for them, as the Eternal has commanded.”

15] Next he brought forward the people’s offering. He took the goat for the people’s purgation offering, and slaughtered it, and presented it as a purgation offering like the previous one. 16] He brought forward the burnt offering and sacrificed it according to regulation. 17] He then brought forward the meal offering and, taking a handful of it, he turned it into smoke on the altar—in addition to the burnt offering of the morning. 18] He slaughtered the ox and the ram, the people’s sacrifice of well-being. Aaron’s sons passed the blood to him—which he dashed against every side of the altar— 19] and the fat parts of the ox and the ram: the broad tail, the covering [fat], the kidneys, and the protuberances of the livers. 20] They laid these fat parts over the breasts; and Aaron turned the fat parts into smoke on the altar, 21] and elevated the breasts and the right thighs as an elevation offering before the Eternal—as Moses had commanded.

22] Aaron lifted his hands toward the people and blessed them; and he stepped down after offering the purgation offering, the burnt offering, and the offering of well-being. 23] Moses and Aaron then went inside the Tent of Meeting. When they came out, they blessed the people; and the Presence of the Eternal appeared to all the people. 24] Fire came forth from before the Eternal and consumed the burnt offering and the fat parts on the altar. And all the people saw, and shouted, and fell on their faces.

10:1] Now Aaron’s sons Nadab and Abihu each took his fire pan, put fire in it, and laid incense on it; and they offered before the Eternal alien fire, which had not been enjoined upon them. 2] And fire came forth from the Eternal and consumed them; thus they died at the instance of the Eternal. 3] Then Moses said to Aaron, “This is what the Eternal meant by saying:

Through those near to Me I show Myself holy,

And gain glory before all the people.”

And Aaron was silent.

4] Moses called Mishael and Elzaphan, sons of Uzziel the uncle of Aaron, and said to them, “Come forward and carry your kinsmen away from the front of the sanctuary to a place outside the camp.” 5] They came forward and carried them out of the camp by their tunics, as Moses had ordered. 6] And Moses said to Aaron and to his sons Eleazar and Ithamar, “Do not bare your heads and do not rend your clothes, lest you die and anger strike the whole community. But your kin, all the house of Israel, shall bewail the burning that the Eternal has wrought. 7] And so do not go outside the entrance of the Tent of Meeting, lest you die, for the Eternal’s anointing oil is upon you.” And they did as Moses had bidden.

8] And the Eternal One spoke to Aaron, saying: 9] Drink no wine or other intoxicant, you or your sons, when you enter the Tent of Meeting, that you may not die. This is a law for all time throughout the ages, 10] for you must distinguish between the sacred and the profane, and between the impure and the pure; 11] and you must teach the Israelites all the laws which the Eternal has imparted to them through Moses.

12] Moses spoke to Aaron and to his remaining sons, Eleazar and Ithamar: Take the meal offering that is left over from the Eternal’s offerings by fire and eat it unleavened beside the altar, for it is most holy. 13] You shall eat it in the sacred precinct, inasmuch as it is your due, and that of your sons, from the Eternal’s offerings by fire; for so I have been commanded. 14] But the breast of elevation offering and the thigh of gift offering you [and your wife], and your sons and daughters with you, may eat in any pure place, for they have been assigned as a due to you and your sons from the Israelites’ sacrifices of well-being. 15] Together with the fat of fire offering, they must present the thigh of gift offering and the breast of elevation offering, which are to be elevated as an elevation offering before the Eternal, and which are to be your due and that of your sons with you for all time—as the Eternal has commanded.

16] Then Moses inquired about the goat of purgation offering, and it had already been burned! He was angry with Eleazar and Ithamar, Aaron’s remaining sons, and said, 17] “Why did you not eat the purgation offering in the sacred area? For it is most holy, and it is what was given to you to remove the guilt of the community and to make expiation for them before the Eternal. 18] Since its blood was not brought inside the sanctuary, you should certainly have eaten it in the sanctuary, as I commanded.” 19] And Aaron spoke to Moses, “See, this day they brought their purgation offering and their burnt offering before the Eternal, and such things have befallen me! Had I eaten purgation offering today, would the Eternal have approved?” 20] And when Moses heard this, he approved.

11:1] The Eternal One spoke to Moses and Aaron, saying to them: 2] Speak to the Israelite people thus:

29] The following shall be impure for you from among the things that swarm on the earth: the mole, the mouse, and great lizards of every variety; 30] the gecko, the land crocodile, the lizard, the sand lizard, and the chameleon. 31] Those are for you the impure among all the swarming things; whoever touches them when they are dead shall be impure until evening. 32] And anything on which one of them falls when dead shall be impure: be it any article of wood, or a cloth, or a skin, or a sack—any such article that can be put to use shall be dipped in water, and it shall remain impure until evening; then it shall be pure. 33] And if any of those falls into an earthen vessel, everything inside it shall be impure and [the vessel] itself you shall break. 34] As to any food that may be eaten, it shall become impure if it came in contact with water; as to any liquid that may be drunk, it shall become impure if it was inside any vessel. 35] Everything on which the carcass of any of them falls shall be impure: an oven or stove shall be smashed. They are impure—and impure they shall remain for you. 36] However, a spring or cistern in which water is collected shall be pure, but whoever touches such a carcass in it shall be impure. 37] If such a carcass falls upon seed grain that is to be sown, it is pure; 38] but if water is put on the seed and any part of a carcass falls upon it, it shall be impure for you.