The Moral Imperative of the Stranger

In Parashat Mishpatim, we find the Israelites in the midst of the Revelation at Sinai, experiencing the communal wonder and intensity of their encounter with God. Mishpatim, which means “laws,” dives into the details. The Revelations in Mishpatim are among the words Moses writes down on stone when he and Aaron ascend the mountain. Scholars call these laws the Book of the Covenant or Sefer HaB’rit. It’s the Torah’s first pass at the legal details that govern Jewish living.

Among the many “you shalls” and “you shall nots” we encounter in Mishpatim, we read the Torah’s first explicit injunction to protect the stranger. Exodus 22:20 reads, “You shall not wrong or oppress a stranger, for you were strangers in the land of Egypt.” Not oppressing the stranger is a repeated trope in the Torah, and its presence here is the first of many mentions. According to the Rabbis of the Talmud, this exhortation is given 36 times — so often that we must assume it is powerful and ripe with meaning (Babylonian Talmud, Bava Metzia 59b).

Though this is the first time we are told to protect the stranger, the Torah has broached the concept of the stranger before, even in Genesis, at the very beginning of it all. When God first blesses Abraham, God’s words include, “Know now that your descendants shall be strangers in a land not theirs; they shall be enslaved and afflicted for four hundred years. But then I will bring judgment upon the nation they are serving; after that they shall go out with many possessions” (Genesis 15:13-14). These powerful words indicate that the identity of a stranger may be based in the Egypt experience, but it isn’t limited to it. The people of Israel can know freedom, they will first know the experience of living as a stranger. (Incidentally, this passage also solves the problem of why Israel, as God’s chosen, protected, and blessed people would have to endure servitude: it’s preordained as part of God’s initial relationship with Abraham.)

This experience of living as a stranger infuses Jewish tradition for thousands of years to come. As we well know, Jews didn’t just endure four hundred years living as the stranger in Egypt, but also subsequent centuries living as strangers under foreign, often hard and cruel, powers. The Jews’ identification with the stranger has provided generations of Jews a connection with hope of a better future and, today, it provides a moral compass for modern Jews.

It’s true: we modern Jews like to use the catch phrase that “we were strangers in the land of Egypt” all the time. It pushes us to do better, to be kind to others who aren’t like us. But as 20th century biblical commentator Nehama Leibowitz writes, it’s not always so easy:

Do past memories and experiences of strangeness and slavery, really prevail on and influence the newly liberated and independent, to adopt an attitude of tolerance and love to the stranger living among them? Do we not often find the opposite to be true? The hate, persecution and shame the individual or community experiences, in the past, do not act as a deterrent, preventing them adopting the same attitude to those entrusted to their power. … The fact that “you were strangers in the land of Egypt” is certainly no adequate motivation for not oppressing ... the stranger ... (New Studies in Shemot: Exodus, p. 384).

All too often, the stranger is not treated fairly and in fact is treated worse. Leibowitz points out that contrary to the Torah’s words in Exodus 22:20, history demonstrates the difficult experience of the stranger.

Can we read the Torah’s injunctions to not oppress the stranger as a push against basic human urges to make the other, well, other? Is it a way of raising us above the instincts we wish we didn’t have? Perhaps the goal of not oppressing the stranger is not simply a law to be followed, but rather a moral north star, inspiring empathy.

Maybe, then, empathy is actually at the heart of Parashat Mishpatim. While we can certainly look at the laws in the parashah and consider how we might translate them into our modern lives, maybe the broader concept is a simple admission: It’s hard to live ethically. It’s hard to feel connected to those whose lives seem strange to us. It’s not necessarily intuitive. But if we follow the generations of our tradition and its fascination with Exodus 22:20 and the concept of not oppressing the stranger, we might end up, not just with more structured laws, but with a larger sense of a tradition that strives to teach empathy for its own sake.

The idea that empathy is at the root of what it means to be human is one of 20th century French Jewish philosopher Emmanuel Levinas’s major ideas. In his essay, “Useless Suffering,” he writes, “This attention to the Other, which, across the cruelties of our century — despite these cruelties, because of these cruelties — can be affirmed as the very bond of human subjectivity, even to the point of being raised to a supreme ethical principle — the only one it is not possible to contest.”1

Levinas’ words are so powerful, because they reflect our lived experience. It’s one thing to not oppress the stranger because “God said so.” But it’s that much more powerful to do so because of a connection to our own lived experience — whether it’s the Torah reminding us of the importance of empathy in connecting it to our “lived” experience in Egypt, or to our own quieter reflections of the times we have felt like the stranger.

Laws that Lead Us to Act with Compassion

Translated into English, the meaning of Parashat Mishpatim is “Laws,” but I would suggest we also refer to this Torah portion with the word rachmanut, “compassion.” The laws set forth in Parashat Mishpatim give us clear guidance as to our treatment of the segments of society to which we do not belong — the slave, the poor, the widow, the orphan. It point isn’t only that we should remember that we were once strangers in a strange land, for that only calls for empathy — an understanding of the other.

We might be able to feel the pain of those seeking a loan (Exodus 22:24), the donkey of an enemy burdened by a too-heavy load (Exodus 23:5), the most vulnerable among us- the widow and the orphan (Exodus 22:21), but that merely leads those feeling empathy to take on the pain, the fear, the feelings of helplessness of those for whom we are empathizing. Unless those feelings lead to action, we have done nothing to help those and, in fact, may be damaging ourselves in the process.

Psychological research suggests that feelings of empathy with no attached action tend to lead to negative feelings in an individual, while compassion can lead to more positive. When we empathize with others, we are feeling one’s pain. Neuroscientist Dr. Tania Singer says: “if we feel compassion for someone else’s suffering, we do not necessarily feel with their pain but we feel concern — a feeling of love and warmth — and we can develop a strong motivation to help the other.”1

Torah reminds us that while we should recall that we were once strangers in Egypt, the reminder of prior pain is only the beginning. We must take the pain in our history and use it to motivate us to action:

END_OF_DOCUMENT_TOKEN_TO_BE_REPLACED

Beyond Welcoming The Stranger
The Enslavement of Debt, Then and Now
A Continuity of Law that Values the Needs of the Community
Learning from the Imperfection of Religion
Mishpatim for Teens: Shabbat Sha-raps 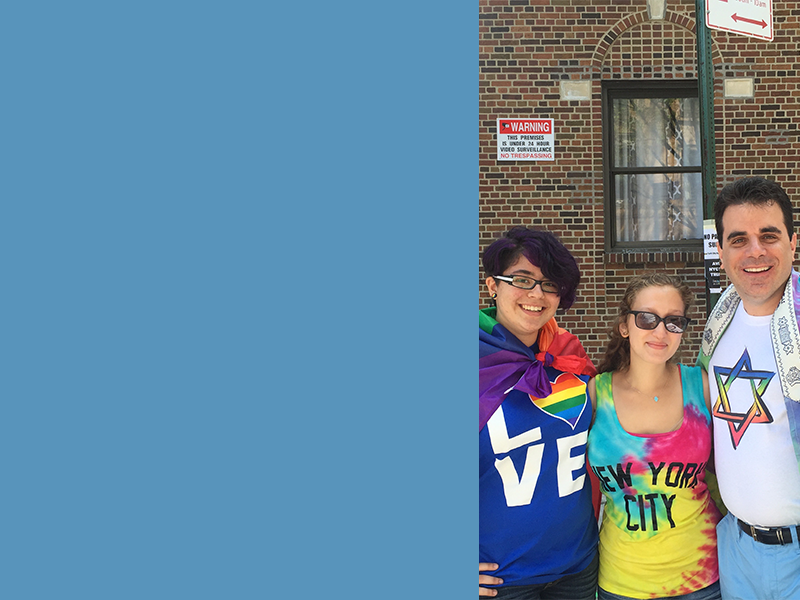 Your gift, matched dollar-for-dollar, helps build strong communities that, together, transform the way people connect to Judaism and change the world.