Out of the Shadows and Beyond the Fear: Zelophehad’s Daughters’ Daughters

Chapter 8: Rose Schneiderman and the Power of Women’s Anger 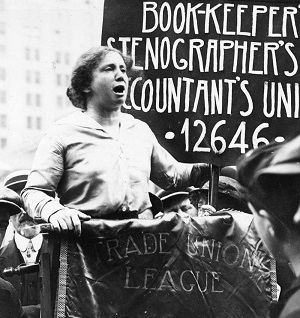 Standing all of 4’9” tall and weighing just 90 pounds, Rose Schneiderman (1882-1972) electrified the crowd gathered to support female suffrage in the summer of 1912. Her rhetoric was known to match her fiery red hair.

Rose Schneiderman learned early on how to channel one’s personal frustration into positive social change. Born in Eastern Europe in 1882, she attended cheder (religious school) and then public school. In 1890, the family immigrated to New York City. When her father died two years later, leaving behind a pregnant wife and three children, her mother was forced to send the older kids to an orphanage.

When Rose reunited with her mother to return home, she was able initially to attend school but had to join the workforce fulltime by the age of 13. She was employed first at a department store, where she worked as many as 70 hours a week, and then in industrial work, where she discovered “not only the camaraderie of the shop floor but also the exploitation that workers, especially women, faced at the hands of their male employers.” In 1903, she organized the first female local of the Hat and Cap Makers Union and rose quickly through the ranks of the International Ladies’ Garment Workers Union (ILGWU).

Schneiderman’s suffrage activism began in 1907, when she joined the newly established Equality League of Self-Supporting Women. Her brilliant oratory skills brought her statewide and then national attention. Financially independent of men, she was a living example of how far women might “stray” from the domestic sphere if given the opportunity. She mocked the idea that voting would somehow “unsex” women, especially when compared to the rigors of industrial work many undertook each day.

“Surely,” she once said, “women won’t lose any more of their beauty and charm by putting a ballot in a ballot box once a year than they are likely to lose standing in foundries or laundries all year round.”

Rose Schneiderman follows in a long chain of Jewish women who channeled their anger into political action – from the daughters of Zelophehad, who appear in this week’s Torah portion, to the women of our own generation, who organize, agitate and simply won’t tolerate injustice.

You might remember Zelophehad’s five daughters from Parashat Pinchas. They’re the ones who, when their father dies without a male heir, insist that they inherit their family’s ancestral land. (Num. 27:1-4) Moses makes their case before God and, lo and behold, their demands are met. The daughters receive a divine promise that the land will stay in their family for perpetuity.

But the startling triumph of Biblical women’s rights does not last long.

Male relatives challenge the divine ruling in this week’s joint portion, Parashat Matot/Ma-sei. They fear that they will be shortchanged should Zelophehad’s daughters “intermarry” with those of another tribe (Num. 36:3), so God decrees that the daughters “may marry anyone they wish, provided they marry into a clan of their father’s tribe [of Manasseh]” (Num. 36:6). Not a lot of latitude there.

As Rabbi Hara Person has observed, by marrying their first cousins, the daughters will essentially hand over their inheritance to the same men who would have received the land had they not stood up for themselves in the first place. (The Women’s Torah Commentary, ed. Elyse Goldstein, 2000, p. 327)

The restriction put upon the daughters makes me good and mad. Why, I wonder, must the women cede their God-given right to men’s fear of, literally, losing ground?

My anger began to dissipate upon reading Rivka Lovitz’s creative interpretation of Numbers 36:11. Lovitz noticed that, in a single verse in this week’s parashah, the five sisters are referred to first in the aggregate based on their relationship to their father (i.e. “daughters of Zelophehad”) and then as individuals, each with her own identity (i.e. “Mahlah, Tirzah, Hoglah, Milcah, and Noah”).

Lovitz understood their father’s name as a compound of two Hebrew words – zel (shadow) and pahad (fear) – and thereby argued that only after the daughters banded together were they able to come out from the shadow of fear and be called by their own names and speak their truth.

As the Book of Numbers draws to an end, I thank you for joining me in shedding light on the Jewish women suffragists whose fearless actions had been hidden in the shadows of the Jewish past.

They are the daughters of Mahlah, Noa, Hoglah, Milcah, and Tirzah.

They count, as do we.

Gaining Ground in the Continued Fight for Equality 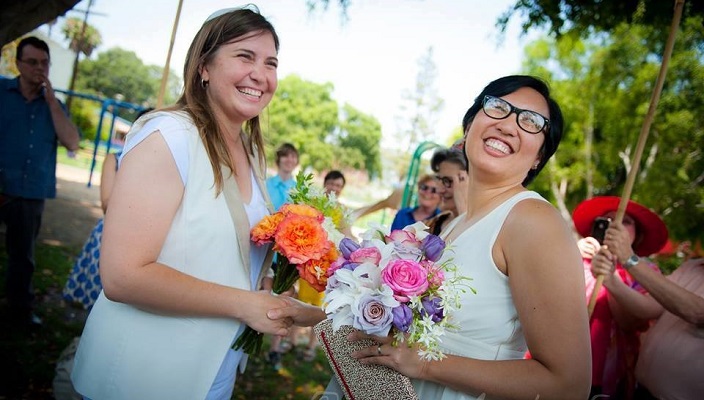 Edith Windsor and Thea Speyer met in a restaurant in Greenwich Village in the 1960s and soon began a relationship that would continue across four decades. They lived together through various homes, vacations, illnesses, and annual anniversary parties each Memorial Day weekend. In 1993, they filed as domestic partners in New York City, and in 2007, they married in Canada because same-sex marriage was not yet legal in the United States.

When Thea died, Edith was left to reconcile her wife’s estate. However, the U.S. government insisted Edith pay federal estate tax, even though the fee would have been waived had they been a heterosexual couple. Because the law was unjust and discriminatory based on sexual orientation, Edith decided to fight for her rights with a lawsuit.

The case traveled up through the courts and finally, on June 26, 2013, the United States Supreme Court issued a decision. In the case of Windsor v. United States, the court ruled in favor of Edith Windsor, awarding same-sex couples equal protection with respect to legal marriage across the nation.

Immediately, my partner and I, along with throngs of other same-sex couples, headed to the courthouse. On that magical afternoon, we stood under the same chuppah that we had used to sanctify our spiritual wedding the year before. There, we affirmed our vows, and this time also assumed all of the legal protections that legal marriage affords.

But this victory didn’t come about magically, and our wedding party was proof of that. We stood under the chuppah with Rabbi Lisa Edwards of the world’s first LGBT congregation, Beth Chayim Chadashim; Torie Osborn, longtime LGBT rights activist and former chair of the National Gay and Lesbian Task Force; and David C. Codell, lawyer in the Windsor v. United States case.

It was important to share our joyful day with them because they are our friends, and also because justice was made possible by their and others’ many years of movement-building across generations. Decades of organizing and a challenge to discriminatory inheritance laws brought about justice for us and millions of other couples.

Discriminatory inheritance laws were challenged in this week’s Torah portion as well. We learned that 3,000 years ago, Zelophehad died without a male heir who would normally inherit his property. His five daughters – Mahlah, Noa, Hoglah, Milcah, and Tirzah – articulated the point that they should inherit his estate. (Numbers 27:3-4)

The daughters went through many steps to garner greater and greater support. Midrash Tanchuma Buber Pinchas 9:2 tells us the daughters of Zelophehad began with the chiefs of the smaller assemblies and progressed to the chiefs of larger assemblies, and even princes. When they reached Moses, he realized that to challenge their cause would be to diminish the dignity of all those whose hands the case passed through. So he brought the case to God, and God affirmed the case of the daughters with these words:

They went through all the steps over time to affect change; and finally, they were allowed to inherit their father’s property. What a joyous celebration they must have had.

But, organizers with experience know that victories are not necessarily permanent.

Following the victory of Zelophehad’s daughters, disgruntled tribesmen voiced concerns that their tribal property would be diminished if the women married men outside of the tribe. (Numbers 36:2-4)

And, so, Moses deployed a caveat to the daughters’ newfound freedom. While they were granted the right to inherit their father’s property, they would be restricted with regard whom they could marry – only men within the tribe. (Numbers 36:5-9) The daughters’ victory was challenged and tempered.

Similarly, the victory of Edith Windsor and same-sex marital rights is often challenged and is under real threat of being rescinded. This underscores the fact that creating justice requires hard work over many generations, and safeguarding these rights requires constant vigilance.

As we have seen through Rabbi Carole Balin’s commentaries on the Book of Numbers, the noble cause of women’s rights did not happen overnight. We gained ground because of the courageous actions of the daughters of Zelophehad, Edith Windsor, Rose Schneiderman, and many others. May we never forget the sacred responsibility to actively support the rights already gained, and to continue to gain ground until every person of every gender enjoys equal rights.

When do we read Matot - Mas'ei

END_OF_DOCUMENT_TOKEN_TO_BE_REPLACED

Rabbi Heather Miller serves several congregational communities in Los Angeles, CA. Prior to ordination from Hebrew Union College-Jewish Institute of Religion in 2008, she majored in Peace and Justice Studies and Africana Studies at Wellesley College in Wellesley, MA. She and her wife, Melissa de la Rama, were named the 2013 Liberty Hill Foundation "Leaders to Watch." Learn more at www.rabbiheathermiller.com .

END_OF_DOCUMENT_TOKEN_TO_BE_REPLACED

On the Other Side of the Jordan
Finding Holiness in Hugs, Home & Hoagies
Are We Capable of Evil?
The Shaping of a Nation in the Wilderness
Matot Mas-ei for Teens: Shabbat Sha-raps