Were they people? Not to the Principal. Not even employees? They were more like digits, widgets, sprockets, more cogs on the command chain. (Joshua Cohen, The Book of Numbers, Oxford, 2014, p. 1.87)

Incredulous. That's how I felt, after requesting and then learning my Uber passenger rating. You see, drivers get to rate and rank you too.

"4.8! That's it?" I thought. "I've never been impolite or unfriendly. I never cancel a request after submitting one. What reason could there be for denying me a full five stars?"

Once again, here was one small example of the many ways each of us is reduced to numbers as we go about our post-modern lives.

The world knows us by our SSNs and PINs. Job performance and health are quantified and compared. We rank and rate universities, restaurants, wine, cars, and even dates.

As the novelist Joshua Cohen writes in his devastating send-up of post-modern life, The Book of Numbers, "Point is, we're all made differently of the same ones and zeros . . . " (ibid., p. 1.99).

It goes without saying that qualification makes large amounts of data easier to categorize and understand. But it also has the effect of obscuring beauty, individuality, and difference. We have only to think of the Nazis' practice of tattooing numbers on our parents, grandparents, or great-grandparents and we shudder with horror.

Perhaps, the dehumanizing quality of quantification is the reason Jews have generally frowned on counting people. I remember my Orthodox Hebrew school teacher counting our class by whispering, "Not one, not two . . . " In fact, this concept goes back to the Babylonian Talmud where Rabbi Isaac taught, "It's prohibited to count the Jewish people, even in order to do a mitzvah" (Babylonian Talmud, Yoma 22b).

Then again, in this week's Torah reading, Parashat B'midbar, God instructs Moses to, "Take a census of the whole Israelite community by their clan, by their ancestral houses, according to the number of names of every male, head by head" (Numbers 1:2). The parashah goes on to count and compare the male populations of the various Israelite tribes.

Nachmanides, in his commentary on this parashah (see Numbers 1:18), suggests that Moses never, in fact, counted the people directly. Rather, every Israelite male came before the tribal chiefs with a shekel and declared his name and tribal affiliation. The chiefs grouped the shekels by tribe and then counted them, yielding an accurate census of each tribe. Perhaps. But this interpretation rings apologetic.

More interesting, however, is Rashi's commentary on this parashah. Rashi turns the whole idea of taking a census on its head. For him, this isn't an act of bureaucratic expediency. Rather, he writes, "Out of God's love for them, he counted them often" (see Rashi on Numbers 1:1). For Rashi, counting doesn't dehumanize or obscure, it's an expression of love and care — one manifestation of God's protection and devotion to God's precious treasures.

We don't normally experience counting in this way. More often than not, to be counted is to feel, as Cohen writes, "more like digits, widgets, sprockets, more cogs on the command chain" — robbed of our identities. Yet, Rashi's interpretation of our parashah, reminds us what we all know deep down: We are much more than the numbers assigned to us. We are much more than ones and zeroes and Uber rankings. We are all precious treasures, worthy of love and affection.

Presence Is at the Heart of Community

Rabbi Skloot concludes, "We are all precious treasures, worthy of love and affection." This is true for us as individuals, and it is equally true when we are able to see ourselves as part of something larger than ourselves. In addition to teaching us that God loves each of us, the census in B'midbar serves another purpose. A plain reading of the text shows us that the census is not simply to count all the Israelites:

Take a census of the whole Israelite company [of fighters] by the clans of its ancestral houses, listing the names, every male, head by head…from the age of twenty years up, all those in Israel who are able to bear arms. (Numbers 1:2-3)

The focus is on the creation of a military. We certainly acknowledge the gender and age exclusion and we're not surprised based on the culture of the time when it was written, but this census marks a transition. Freed slaves are becoming an army. In this context, each individual remains vitally important. In addition to their own skills and talents, they are also important as a part of their clan and for what they are able to contribute to the overall goal. This is true in the military and it remains true in every Jewish community.

This census reminds us that one's presence is at the heart of community: when we show up, we give life to our community. When we attend services, when we come to study, when we give tzedakah or participate together in the work of tikkun olam, we're giving life to our community. It is important that you are there for your own benefit, but your presence, your questions, your contribution have a far greater impact. The total is truly greater than the sum of its parts. In other words, you count. 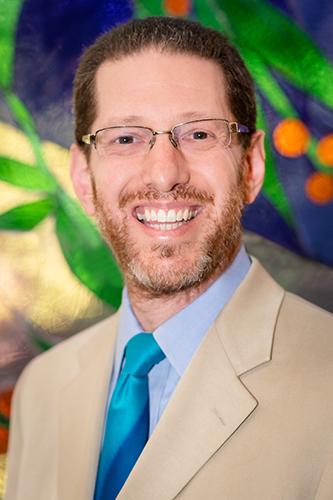 Charlie Cytron-Walker became the new rabbi at Temple Emanuel in Winston-Salem, NC on July 1, 2022. Rabbi Charlie arrives at Temple Emanuel with a history of working to bring a sense of spirituality, compassion, and learning into the lives of the community. He loves finding a connection with people of every age and strives to welcome all who enter the congregation, from interfaith families to LGBT individuals and families to those seeking to find a spiritual home in Judaism, along with all others.

He previously served at Congregation Beth Israel (CBI) in Colleyville, TX since 2006. He was CBI’s first full-time rabbi. He developed positive relationships with local school districts and  helped organized interfaith gatherings including numerous vigils, walks, and relationship building events. He is a past President of the Southwest Association of Reform Rabbis and served on the steering committee of Peace Together. In 2022, he was honored as a Hero Against Hate by the Texoma Anti-Defamation League and currently serves as a Special Advisor to the ADL. Learn more about Rabbi Charlie.

END_OF_DOCUMENT_TOKEN_TO_BE_REPLACED

In the Wilderness – B'midbar
Embracing the Unknowable
Are Women Counted in the Book of Numbers?
To Survive a Sermon About Technical Lists
Containing Lives in the Open Wilderness