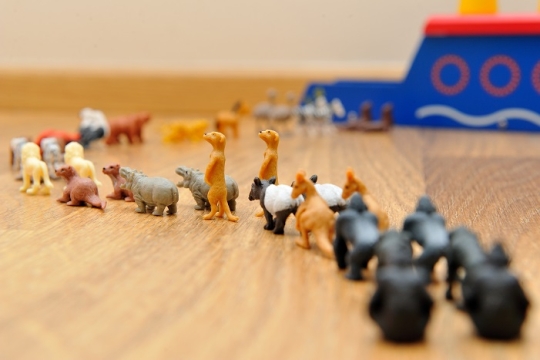 No other Torah portion is as well known or fires the imagination as much as Parashat Noach – but the story includes a number of problematic elements. For instance: How could a 600-year-old man build a cruise ship in his

W.C. Fields said, "Never work with animals or children, [they steal the spotlight]." Though no one ever accused him of being a Torah scholar, his insight was certainly applicable to this week's Torah portion. Parashat Noach, the second portion in the Book of Genesis (and my bar mitzvah portion) is perhaps the most universally known and, at least by children, most adored portion in the entire Torah. This is in part, no doubt, because it has not one animal, but all animals — and they come in pairs! Later, God teaches us to value one another in the incident of the Tower of Babel.

In this week’s parashah, Noach, we hear from Noah’s unnamed wife. She reminds us that it is not easy being one of the women in the Torah. Although these women ensured the future of humanity and of our people Israel, too often they are unnamed, demonized, silenced, or forgotten.

In Parashat Noach, Noah is called an, ish tzaddik tamim, a “blameless” or “wholehearted person in his age.” But biblical commentators criticize his conduct, saying he lacked compassion for his fellow man and that he committed incest. What, then, is the meaning of the word tamim?

In this week’s parasha, Noah is told by God to make an ark before a big flood. He is told to gather animals two by two and bring them aboard, along with his family. After the flood, God promises never to destroy God's people again, and the generations that are born are listed. Listen now to hear these names and to find out what happens when people try to build a tower to the sky!