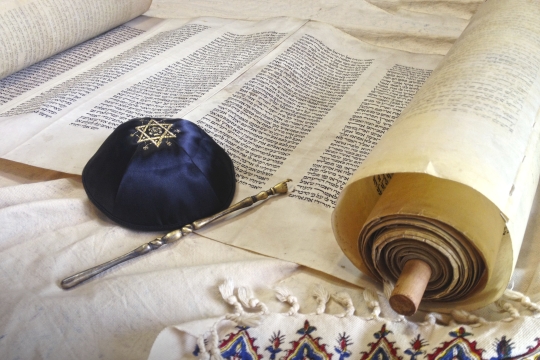 On the eighth day after the commencement of the consecration of Aaron and his sons as priests, Moses summons his brother and nephews to complete the ritual. Aaron is to present various offerings, after which Moses tells him, “Adonai will

The poet, Elizabeth Alexander writes:"Poetry (here I hear myself loudest) is the human voice, and are we not of interest to each other?" ... The priestly purpose is to remain separate from the people while linking them to God.... We are left with a difficult duality, both in the nature of this flesh-focused practice and the priestly power paradigm: in word and in world, what is the primary purpose?

In this parasha, Aaron’s sons are killed for sacrificing to an alien god by using incense. Aaron is not allowed to mourn for them. Listen to learn the laws that are given so that this won’t happen again. The second part of the parasha holds more laws.

Thousands of years ago, Judaism recognized the essential significance of food in the Jewish and human experience. Originally, without explaining “why” we should eat some, but not all types of different foods, the Torah in this week’s portion, Sh’mini (Leviticus 11), laid down a lengthy list of culinary dos and don’ts, the textual foundation of kashrut, Jewish dietary practice and law. The Rabbis greatly expanded on this topic and today there are a variety of expressions of kashrut.

On Wednesday, August 7th, 1974, a 24-year-old Frenchman named Philippe Petit stepped out onto a steel wire strung across the 130-foot gap between the tops of the Twin Towers of the World Trade Center in New York — close to 1,350 feet above the ground. After a 45-minute performance he was asked, "Weren't you afraid that you were going to die?" While conceding, he replied, "If I die, what a beautiful death, to die in the exercise of your passion."

Parashat Sh'mini contains the important and troubling story of Nadab and Abihu. It is the eighth day of the ceremony of consecrating the Mishkan (Tabernacle) and the priests. Aaron and his sons have been sacrificing animals all week long. Fire comes down from heaven and consumes the offerings, and all is going according to plan. Suddenly Nadab and Abihu, two of Aaron's sons, bring an additional offering of incense, which had not been commanded. They are immediately consumed by Divine fire; their bodies are dragged out of the Mishkan while Aaron remains silent.