Adding to the Fire of Prayer That Never Goes Out

Growing up, I spent my summers at URJ OSRUI, the Reform Jewish summer camp in Oconomowoc, WI. Of all the incredible things that I learned — Hebrew, playing the guitar, Jewish history, prayer, and more — the specific piece that I needed to understand this week’s Torah portion came from watching my counselors light campfires for roasting smores.

This first portion in the Book of Leviticus, Parashat Vayikra, is filled with technical details of Temple sacrifice. “Speak to the Israelite people, and say to them: When any of you presents an offering of cattle to the Eternal…” (Lev 1:2). Hidden right near the beginning of the quite lengthy sacrificial instructions for which Leviticus is well-known is this curious verse:

“The sons of Aaron the priest shall put fire on the altar and lay out wood upon the fire.” (Lev 1:7)

While these days I may not be known among my friends and colleagues as a great outdoorsman, I do remember seeing those campfires at OSRUI well enough to wonder if the Torah might have gotten things a bit backwards here.

How does one put fire on the altar before the wood? Don’t you need to get things set for the fire to catch? Certainly, one might add extra wood to an already burning fire, but is that the situation here? And if that were the case, then how or why would Aaron’s sons add more fire to it?

Rashi, the 11th-century French commentator and ever-faithful transmitter of Rabbinic lore, points us toward a captivating adage from the Talmud:

“Although the fire descended from heaven, it is nevertheless a mitzvah (commandment) to bring [some fire] by a person.” (Babylonian Talmud, Yoma 21b)

Midrash teaches that the fire on the altar was not like other fires in the world. A Divine gift from God, it possessed many unique properties, but for now, we’ll focus on just two. First, this fire made no smoke of its own and from the days of Moses all the way until the reign of the evil King Manasseh (see II Kings 21) it never went out. This miraculous smokeless and unextinguishable fire is what Aaron’s sons found when they came to the altar to offer their sacrifices. According to the midrash, when they added in their bit of human-made flame, the miraculous fire was changed and began emitting smoke, allowing the people assembled around the Temple to see that the burnt offerings were ascending out of the altar.

The sacrifices of Leviticus are defined in our tradition not only as worship, but also, more centrally, as avodah, ”service.” Complicated, often bloody, and requiring many steps, they were our people’s first efforts at creating meaningful connection between humanity and God. Not everyone, after all, can be a prophet and only Moses got to talk to God face-to-face. Sacrifice, as service, gives everyone something to do. As moderns we have fully embraced the transition from Temple service to “the service of the heart” (Ta’anit 2a) and just as our ancestors contended with the curious procedure of adding fire to the already burning altar, so must we.

Prayer can be so hard. Reading the words of the siddur may be easy, but turning those words into actual prayer can seem like an insurmountable effort. All too often, when we try to light “the candle of the Eternal, the human soul” (Proverbs 20:27) within us, it feels like we are trying to light a match outside on a windy day. It can be defeating and upsetting. But imagine if, just like the sons of Aaron facing the altar those thousands of years ago, we didn’t have to work quite so hard.

What if we envisioned that the altars on which we offer our prayers — whether in our synagogues, homes, offices, or cars —  were already burning? We wouldn’t need to worry about getting the flames going from scratch. We would only need to find our own tiny bit of flame we could throw in to the already-blazing fire. Following the midrash, that tiny piece of fire from us would change the Divine fire’s very nature. Without the vital human element added to it, God’s fire burns without smoke — without a way for us to see it and its effects.

Prayer doesn’t have to be so hard. We don’t each need to build our own self-contained and self-sustaining campfire on which we can offer up the service of our hearts. We can, like Aaron’s sons, join the unextinguishable flame that has burned since the days of Moses. No matter where we find ourselves in our service to God, we are not working alone.

As we begin a new book of Torah in this year’s cycle, take stock of your internal flame — the gifts of inspiration, spirit, and love that are uniquely your own — and bring that flame to God. Your light is needed. God’s bonfire is only truly aglow when you add your flame.

Cantor David Berger serves as the cantor of KAM Isaiah Israel Congregation in Chicago, IL. Currently pursuing his Ph.D. at the Chicago Theological Seminary, he is honored to be the inaugural Scholar in Residence for the American Conference of Cantors.

How Can We Serve God with the Works of Our Hands?
Davar Acher By:
Isaac Brynjegard-Bialik

This week, as we begin the Book of Leviticus with Parashat Vayikra, we read about the eternal flame in the Temple in Jerusalem — a symbol of God’s Presence amidst the Jewish people. The smoke rising from the altar was a remnant of our communications with God — physical evidence that we had engaged with the Eternal.

Cantor David Berger writes that “As moderns we have fully embraced the transition from Temple service to ‘the service of the heart,’” citing Babylonian Talmud, Taanit 2a:

To love the Lord your God and to serve Him with all your heart” (Deut. 11:13). Which is the service of God that is performed in the heart? You must say that this is referring to prayer.

We could take this to mean that as we no longer make physical sacrifices, rather than serving God with our hands, we serve with our hearts and minds. And yes, we have transformed Judaism — the work of our hands, turning substance into flame and smoke became the work of our minds, turning words into music and praise. But where does that leave our hands? I suggest that we still have the power — and the responsibility — to serve God with our hands.

The altar smoke — “of pleasing odor to the Eternal” (Lev. 2:9) — is akin to a finished work of art created by a painter or sculptor. It is the lingering echo of music after an orchestra plays or the warmth of a room that has been filled with dancers exercising their bodies. A painting is the evidence that we have painted — and art about the Jewish experience is evidence of our efforts to commune with our people across time, and with the Divine.

The Jewish-American artists, Barbara Kruger said, “Making art is about objectifying your experience of the world, transforming the flow of moments into something visual, or textual, or musical, whatever.” When we use the work of our hands in concert with the work of our minds, we can transform our personal experience of the world and the Divine into a shared moment — into a part of the continuing conversation that has been part and parcel of Judaism since the Divine creation of the world.

Our history reveals a continuous connection between art and Jewish practice — from the carving of the Ten Commandments in the moments before the first Shabbat at the end of Creation (Pirkei Avot 5:6) to Bezalel leading the Israelites in the building of the desert Mishkan (Ex. 35), to the commandment of hiddur mitzvah, “beautifying the commandments.” In Midrash M’chilta d’ Rabbi Ishmael,it says:

“I shall glorify God in the way I perform mitzvot. I shall prepare a beautiful lulav, beautiful sukkah, beautiful tzitzit, and beautiful tefillin.” (Shirata, Ch. 3). The Talmud adds, “a beautiful shofar and a beautiful Torah scroll which has been written by a skilled scribe with fine ink and fine pen and wrapped in beautiful silks” (Shabbat 133b).

Our hands still can — and must — do the work of connecting us to the Divine. We can paint, draw, weave, cut, carve, and inscribe — in the service of our people and the Eternal. We can tell our story, praise God, and promote the ideals of tzedakah, emet and shalom. 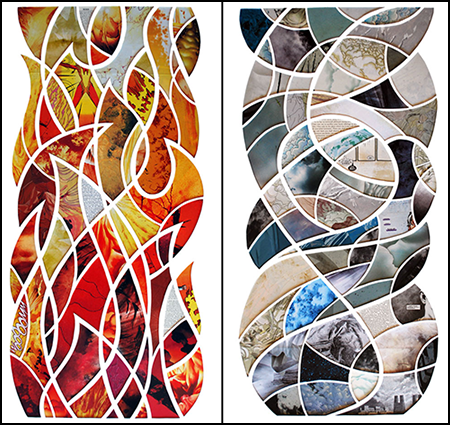 In my work as a papercutter I am in constant engagement with this task, cutting up and collaging comic books and other found materials and using them as a lens through which to study Torah and make “paper midrash.” My papercuts “Altar Flame” and “Altar Smoke” are two explorations of this week’s parashah: attempts to find meaning in superseded ritual practices.

Both of these papercuts reflect the connection between the Jewish people and the Divine, in ancient and modern practice. Within the flames rising from the altar can be found a phoenix, a superhero member of the X-Men with godlike powers, as well as Wonder Woman, whose story is one of constant back-and-forth between gods and human beings. Tucked into the sacrificial smoke are comics featuring godlike heroes like Superman and Thor and also very human heroes like Batman. Our narratives about the relationships of these super-powered beings, and how they connect with the people around them, an inform our ideas about our relationship with God. We ask ourselves what it means to communicate directly with the Divine, and for what purpose we praise God with our hands and hearts.

Jews have always made things of beauty — for ritual and observance, and also to inspire people and praise the Divine. The work of our hands is vital to the work of our souls.

Isaac Brynjegard-Bialik is a Jewish artist who cuts up comic books and reassembles them into papercuts that explore the stories of our people, connecting popular culture with sacred texts. He and his wife, Rabbi Shawna Brynjegard-Bialik, founded Paper Midrash and travel the world teaching about Torah, comic books, pop culture, and art.

Somewhere during the course of your Passover seder this year, ask one of these questions and see how your fellow attendees respond.

This recipe will make your Passover week! It is delicious with milk for breakfast and a healthy snack for school or work.

The Eternal One spoke to Moses, saying: "Command Aaron and his sons thus: This is the ritual of the burnt offering: The burnt offering itself shall remain where it is burned upon the altar all night until morning, while the fire on the altar is kept going on it." - Leviticus 6:1-2