I was two-and-a-half when my parents packed our few possessions and moved from a kibbutz on the banks of the Sea of Galilee to the promised land of New Jersey - where my father, a nuclear physicist, aspired to become a millionaire.

For my father, moving to America meant our family would have to assimilate. He often lamented my given name. "I'm so sorry we called you Hanan," he'd say, "but we didn't know, how could we know?" One day he declared (he had a way of declaring things, like a king) that he was changing his name from Micha to Michael. "From now on," he proclaimed, "you will all call me Michael." There were, however, two problems with this name change. First, my mother continued to call him Micha in public, which infuriated him; second, he would introduce himself as Ma-eeeee-KEL, which prompted people to say "What?" So, eventually, he returned to Micha.

My father also announced that we must stop speaking Hebrew-but my mother would have none of it. Eventually, they reached a compromise: he would converse in Hebrew with her, and in English with my sister and me. Whatever she may have promised to my father, my mother spoke to us in a mixture of Hebrew and English, switching to all Hebrew when she screamed at us, which happened more often than not. My sister and I can speak Hebrew today thanks to my mother's perseverance and temper.

Following in my parents' footsteps, I grew up anti-religious. My father deemed religion "a waste of time," an attitude he'd inherited from his father, who rejected the faith of his Orthodox parents at age 20, when he became a socialist Zionist and helped found a kibbutz in then Palestine. Still, whenever my father wanted to prove a point, he'd tell us a Torah story and argue, "Even in the Bible, it says…."

When I was 11 1/2, my parents divorced, and my mother began taking my sister and me to shul once a year, on erev Yom Kippur. The services were daunting and emotionally exhausting. All I could think about were the things I had done wrong, and whether or not I would be written into the Book of Life.

My mother also began taking me to annual seders held at the home of her coworker, Mrs. Prince, a compassionate, kind, and very observant Jewish woman. They were a delight; I got to ask lots of questions, eat delicious food, and engage with my Jewish heritage in a meaningful way, albeit for one evening a year.

In college I majored in art, and, after flirting with abstract impressionism, found my voice as a "psychological narrative painter," focusing on my family. In graduate school, I added video and animation, which enabled me to mimic my parents' Jewish mannerisms and Israeli accents.

It wasn't until I was 39, married, and working as a high school art teacher that my relationship to Judaism changed. A friend told me about a project seeking Jewish artists. I submitted my animations and was selected as one of 11 contemporary video artists to create a short film interpreting segments of the haggadah for "Projecting Freedom: Cinematic Interpretations of the Haggadah." Though I was initially hesitant to devote a great deal of time to the year-long project, two aspects appealed to me: the chance to make new work (I hadn't produced any in nearly a year), and the assurance of artistic freedom. So I accepted.

There was one catch, however. The artists had to attend monthly Passover-related text study sessions, led by the project's creator, Rabbi Leon Morris, who directed the Skirball Center for Adult Jewish Learning at Temple Emanu-El in Manhattan.

To my surprise, these sessions immersed us in deep conversations about the human condition, psychology, and philosophy - topics I'd never before associated with Judaism, and precisely the same issues I had been exploring in my artmaking. I became increasingly drawn to Jewish text study and Rabbi Morris' compassionate approach to Judaism, which reminded me of the meaningful experiences I'd had at Mrs. Prince's seder table.

For the topic in my portion of the haggadah video project I chose maror (bitter herbs), because the protagonist in my animations, my father, was often, well…bitter. At this point I needed good sources for my video that would also reflect the content we explored in our text study sessions. So, at age 39, I began to read the Torah seriously. I stumbled upon a short passage, Parashat Bo: "And on this night, they shall eat the flesh, roasted over the fire, and unleavened cakes; with bitter herbs they shall eat it" (Exodus 12:8). Reading these words catapulted me back to a passage we would read each year in the haggadah at Mrs. Prince's seder: to fulfill the minimum obligation of a Passover seder, one must discuss three things - the Pesach offering, the matzah, and the bitter herbs. Somehow, finding the source of that passage in the Torah was strangely exciting, as if I had discovered something new.

I then began to wonder why maror, of all things, was included as one of the three essential seder elements. I concluded that without the bitterness there could be no freedom. That led to another realization: While my parents were unquestionably bitter, behind their bitterness was a distinct sense of hope. My parents' bitterness seemed to have a larger purpose: the idea that bitterness is a part of life, but that if one chooses to believe, hope, and persevere despite the bitterness - or perhaps even because of it - one could reach another level. With this short little passage from Exodus (Parashat Bo, 12:8), I had found the theme for my animation (watch video). I felt moved to continue reading the Torah and see what else was there.

The more I studied Torah and rabbinic commentaries, the more I came to see that many of my parents' ways of arguing, reasoning, and questioning were steeped in the sacred wisdom of our ancestors. I also identified in Judaism many teachings on human values and the human condition that I had explored in my psychological narrative artwork and had previously attributed to modern psychology and philosophy instead. For example, I had always thought that practicing introspection - studying one's own behavioral patterns, asking oneself where one learned them, and through awareness of these behaviors changing them - was a modern psychological tool, but it turned out that this analytical process had been detailed in the 12th century by the great Jewish philosopher Moses Maimonides! Moreover, in the 17th century the Baal Shem Tov, who founded the Chasidic movement, taught that God created other people as mirrors, allowing us to see our own faults in others - an insight I had attributed to Sigmund Freud. And I discovered the basis of empathy in a teaching of Hillel, one of our finest sages: "What is hateful to you, do not do to your neighbor." I wondered: How much of who I am as a person and as an artist is rooted in thousands of years of Jewish thought and study? And I thought: What a shame it is that in the process of becoming non-religious, I had missed out on this wealth of Jewish teachings and wisdom on the human condition.

That's when I got the idea of making Torah wisdom accessible to non-religious people like myself. I would create animated conversations between my parents and me, calling it "Jewish Food For Thought: The Animated Series." With a Covenant Foundation grant, I took a leave from my teaching job and studied with dozens of rabbis and other Jewish scholars (who, in the process, become life-changing mentors).

Curiously, my father developed a strong interest in the project and became one of my teachers. We held lengthy conversations about many topics, portions of which made their way into the animations. Often we communicated via Skype. Once, with my infant son Benjamin sitting on my lap, I shared the Torah passage commanding us to Love your fellow as yourself and the accompanying commentary noting that Rabbi Akiva considered this the greatest principle of the Torah. Suddenly my father burst out into a Hebrew song that summarized Akiva's teachings which he'd learned on the kibbutz as a child. Both Benjamin and I were smiling broadly as my father sang the song (watch video).

The animations took an immense amount of research. Each source pointed to more sources, leading to more questions. One scholar led me in one direction; the next took me elsewhere. Contradictions and questions proved essential to the process.

In this way, I gained a new understanding of Yom Kippur - that to make mistakes is human. What matters is how we handle ourselves after we've made a mistake. Judaism provides a process of acknowledging the mistake, apologizing, expressing remorse, fixing what can be fixed, and most importantly, looking honestly inside of oneself to see how the mistake happened and to improve so as not to repeat it. Suddenly, both my own mistakes and those of others became opportunities. Forgiveness was an opportunity to let go of resentment towards a person who had wronged me, or as Rabbi Abraham Twerski put it: "Stop letting the person live rent free inside of your head!"

These insights were reflected in my first two animations, "Repair" (on the theme of t'shuvah, or return) and "Landlord" (on the theme of forgiveness), released prior to the High Holy Days in 2011 and shown widely, including at the 2011 URJ Biennial.

At the same time I completed a rough draft of the third episode of the series, "You Can Dance" (on the theme of gratitude), based on conversations with my father. My dad was feeling depressed because he felt he had not achieved in life as much as he'd hoped. I tried to ease his unhappiness by sharing a teaching from Pirke Avot (Ethics of Our Sages): "Who is rich? Those who rejoice in their own portion." Being grateful connects you to the present moment, I pointed out, instead of living in the future of expectations or the past of regrets. And being in the present moment, through gratitude, allows you to actually take in and truly experience how much you really have. My father was able to follow the logic of this teaching, but he remained unconvinced.

Shortly after this encounter, my father became ill and died. He was buried on the shores of the Galilee near the kibbutz of his youth. I began to go toshul every Saturday to say Kaddish for him. One Shabbat, a congregant informed me that, traditionally, a Jew was required to reciteKaddish for only 11 months - I had actually overdone it by a couple of weeks. I continued to go to shul, but not standing up to say Kaddish left me feeling strange and empty. I found myself looking forward to my father's first yahrzeit, when I would have the opportunity to say Kaddish again.

On that day, I was called to the bimah in honor of my father's first yahrzeit. I recited the Torah blessing - and saw, to my amazement, that the Torah portion I was called up for happened to be Exodus, Parashat Bo, 12:8, the very text I had stumbled upon four years earlier when I began reading Torah seriously for the first time!

At that moment, everything seemed to fit. I saw my father taking us out of Israel to America as the beginning of the journey that would return me to the Jewish roots of my grandparents before they immigrated to Israel and gave up their religion. I was returning to something never lost, but simply hidden. 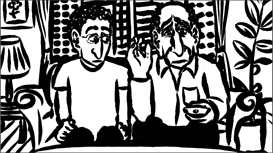 Hanan Harchol, a multimedia visual artist, has exhibited in museums and galleries throughout the U.S., and screened his films and animations at film festivals worldwide and on Channel 13.