What should travelers not miss in Moscow?

There is so much to see...Red Square, the Kremlin and its museums, our art galleries, the Bolshoi Theater, ballet, opera…the city is alive with culture.

The most important Jewish site is the stunning 1906 Moscow Choral Synagogue, with its Moorish style interior and Arabesque moldings and murals. And be sure to visit the new Jewish Museum, which tells the story of Jews in Russia from Tsarist times through today. I would also recommend Shalom Theater, the first professional Jewish theater in Russia, where you can see musicals, drama, and comedy.

If you travel in winter, take warm clothes with you, as -30 Celsius (-22° Fahrenheit) is not an unusual temperature for winter months.

When did Progressive Judaism take root in Moscow?

Because of the events of the last century—wars, the repressive Soviet system—it was not possible for Judaism to develop freely and naturally in Russia. The first Reform Jewish group was established only 25 years ago. In 1989, Hineini was officially registered with the government as a congregation.

Now there are three Progressive congregations in Moscow: Hineini, Severnaya (“Northern,” established in 2000), and our synagogue, Le-Dor va-Dor (“From Generation to Generation,” established in 1999). Hineini and Severnaya serve hundreds of older people seeking a friendly Jewish environment in their neighborhood. Le-Dor va-Dor is primarily for families with young children—we took the name after many families with small children decided to join. About 80% of our 200 members are under 40, and some families have 3 or even 4 children.

What else distinguishes your congregation?

Very few of our members were raised as Jews, at least with some degree of observance. Most discovered their Judaism as adults. My personal story is perhaps typical. Only at age 15, at the time of Perestroika in 1990, did I learn that my mother was Jewish. I started to learn Hebrew in my native Ekaterinburg, Russia, and then began to bring my mother and maternal grandparents to Jewish events. Much later I became involved with Reform Judaism, but my very first step was choosing to be a Jew. Then came the choice of what kind of Jew to be—Orthodox, secular, Reform. As a student of literature, I felt most at home with Reform Judaism, which embraced the questioning of text. This spiritual journey led to my becoming a rabbi.

Much of my work at Congregation Le-Dor va-Dor centers on helping Moscow Jews who have little Jewish literacy become more knowledgeable and raise Jewish children. Many of our adult congregants have a Jewish father and non-Jewish mother, and are therefore not recognized as Jewish by the Orthodox and Lubavitchers. At Le-Dor va-Dor, these patrilineal families are accepted and get to meet others like them; on Sundays, when their children are in religious school, for example, we’ve created a separate space where they can share their experiences and concerns.

About 20% of our members have converted to Judaism via the FSU’s Reform Beth Din (rabbinical court). Most of these individuals are converting because they have no proof that their parents/grandparents were Jewish. In the Soviet period people’s ethnic origins were stated on their passports, and their parents’ origins were recorded on their birth certificates (nowadays ethnic origin does not appear on any official documents). During WWII some families purposely disposed of their documents, and it is now impossible to trace their origins because many archives were destroyed during the war. Even for those congregants who were raised Jewish, if they do not have supporting documents, the only option to be acknowledged as a Jew by the Jewish community is by a Reform Beth Din conversion. The process takes at least one year, and many converts later become very active members. They also teach their parents and even their grandparents about their Jewish heritage.

Services are led by one of two Russian-born rabbis (Rabbi Alexander Lyskovoy and myself) or our Ukrainian cantor (Cantor Dmitry Karpenko). Having been largely influenced by the Israeli Movement for Progressive Judaism, we (and other Moscow Reform congregations) use the Israeli Reform prayer book Ha’avoda Shebalev, which has been translated into Russian, reciting most of the prayers in Hebrew and a few in Russian. When a visitor from abroad joins us, we always provide an English translation.

Our liturgical music is a unique blend of American and Israeli melodies, Chasidic tunes, and some additional melodies with a Ukrainian flavor composed by our cantor. The style of our services varies. On Friday night we sing more “camp-style” melodies accompanied by guitar, and attract young Jews. On Saturday morning, services are more “classical,” sometimes using an electronic organ, and families with children are the main participants.

Which holidays are most popular?

Most popular is Passover, which we typically celebrate with communal seders intermixing traditional readings, music (jazz and other styles), and video presentations of haggadah illustrations. Seders are popular in the wider Jewish community as well. This is our time to celebrate freedom from Soviet oppression, recalling the period not so long ago when it was forbidden to observe our religion.

Next in importance to our community is Rosh Hashanah and Yom Kippur. Year by year, more of our members come to understand the importance of the High Holy Days as a time of spiritual renewal.

What are your most important Jewish lifecycle celebrations?

The most meaningful ones at Le-Dor va-Dor are baby naming, because we have many small children, and b’rit milah, because many adults who were not raised as Jews decide to be circumcised in private ceremonies at a local clinic.

Also, b'nai mitzvah (bar/bat mitzvah) ceremonies are becoming increasingly common here. In the past, 13-year-olds had birthday parties; now most have a meaningful Jewish rite of passage. Whereas five years ago parents did not expect their children to have formal learning, it is now understood that b'nai mitzvah (bar/bat mitzvah) involves a learning period of up to one year.

We are the first Progressive congregation in Russia to introduce membership fees. The amount is very small, and does not allow the congregation to be self-sufficient; it represents a “social” (symbolic) membership fee for all those who chose to identify as Reform Jews. It is very unlikely that our two other Moscow congregations will follow this practice, since their members are older Jews—pensioners coping with limited income and steep utility bills.

We hope you will come visit us. Le-Dor va-Dor is a friendly and lively community, with many members who speak English. You will be warmly welcomed here. 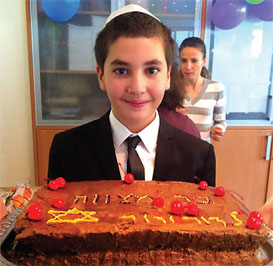