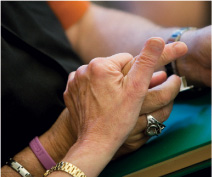 Reform Jews in congregations across the continent are now embracing a Jewish spiritual practice formulated in 19th-century Lithuania.

It’s Sunday morning at Congregation Beth Shalom in Carmichael, California. Karen Brandt, a 54-year-old administrative law judge, is meditating with six other congregants. Afterwards, they break into a discussion about humility, or anivut in Hebrew, talking about how the character trait showed up in their lives over the past two weeks—not in the sense of being humble or pulling back, but by taking a leadership role when the situation demanded it. As the Musar phrase goes: “No more than my place; No less than my space.”

On the surface, Brandt’s class, led by Rabbi Nancy Wechsler-Azen, could be any Jewish adult-ed class, except that these Reform Jews are part of an emerging and growing phenomenon within the Movement that few could have imagined a decade ago. They’re doing Musar, a Jewish spiritual practice rooted in the tradition, but until recently little known outside the Orthodox world—a practice which focuses on living a more conscientious life and heightening awareness of the world and one’s responsibilities; in short, becoming more of a mensch.

Musar is aimed at elevating one’s character, or what Musar calls soul traits (middot). Practices include meditation, chanting, studying Musar texts, engaging in Musar discussions, and keeping a daily journal on the middot (soul traits) that practitioners discover to be obstacles in their lives.

Though Musar practice is often viewed in ethical terms, it is at its core a method of drawing oneself closer to God. “To single out the ethical, behavioral, or practical elements without reference to the religious or spiritual aspects,” explains Alan Morinis, founding director of The Musar Institute, “is to distort what Musar is and has always been.”

Brandt and her fellow Musar classmates, who meet for an hour every other Sunday, next turn their attention to the middah (trait) of yirah, or awe of God. One woman talks about how it showed up as she stood with her family while her father underwent surgery. For the two weeks the group worked on this trait, Brandt often recited the phrase from Psalm 16: “Shiviti adonai l’negdi tamid—I set God before me always.” This focus, she says, helped her better accept that her father’s and her family’s fate was in God’s hands. “Maintaining a constant sense of God’s presence has become my religious practice, my spiritual practice,” Brandt says. “It has become how I organize my life, how I keep track of how I am going through the world.”

Similar Musar groups involving an estimated two dozen Reform congregations are meeting throughout North America, from Carmichael’s Beth Shalom to Brooklyn’s Congregation Beth Elohim. At Temple Chai in Phoenix, for example, a group of six women called the Musar Mamas has been meeting for five years, and two more temple groups are now up and running. The Musar group at Temple Beth El in Eureka, California has been going for three years, and another recently started. “It’s the most excitement I’ve seen generated about anything at our shul in a while,” says adult-ed teacher Caroline Isaacs.

“The interest out there is just tremendous,” adds Alan Morinis, whose book, Climbing Jacob’s Ladder, about his own discovery of Musar, has become a gateway for many new Musar students. The number of Musar practitioners is believed to be in the hundreds within the Reform Movement, in the thousands worldwide—and growing

The Musar Movement was founded in 19th-century Lithuania by Rabbi Yisrael Salanter (1810–1883). Ethical conduct based on Torah values, he taught, is the essential goal of the Jewish people. To improve one’s ethical conduct, or, more to the point, to refine the traits of the inner life or soul, he invented a method he called hitpa’alut: the chant­ing of holy phrases or ethical concepts with such emotional intensity that the intellectual message reaches the unconscious mind and leaves a strong enough impression to modify behavior. As Rabbi Salanter and others experimented on themselves, they observed the results and concluded the method worked.

Rabbi Salanter’s teachings were directed at craftsmen and laborers as well as influential lay leaders and opinion makers in the community, women as well as men. True, traditional Jewish society excused women from time-bound mitzvot, but since work on one’s inner life was not controlled by the calendar, Musar leaders saw no halachic (or religiously legal) reason to exclude women from the practice.

Despite its inclusiveness, Musar did not spread quickly, though it did influence a generation of rabbinic disciples who, by the mid-1800s, would become heads of many Eastern Europe yeshivot (plural of yeshiva). Fewer than 100 years later, on the eve of World War II, three streams of Musar thrived, each associated with a different yeshiva (Orthodox Jewish school) and locale. Kelm Musar, an introspective approach, focused on the mind’s power (“Take time, be exact, unclutter the mind”). Slabodka Musar, a more behavioral-based approach, taught its adherents to internalize the belief they were made in God’s image. And Novarodock Musar, the most radical and aggressive of the three streams, insisted that inner change required one to “storm the soul.” Of them, the Slabodka Yeshiva was perhaps the most influential, generating offshoots in Israel and the U.S. Today, Musar teachers draw on the teachings of all three schools.

Although many of Musar’s leading proponents were killed in the Holocaust, a sufficient number survived and brought their knowledge to approximately ten yeshivot in the U.S. and Israel that had been established before the Second World War. Still, Musar was not widely practiced, in part because Rabbi Salanter’s disciples focused on yeshivot rather than Jewish communities at large; and because many Hasidic and other rabbinic leaders opposed it, believing that anything other than traditional Torah study was a wasteful diversion.

It wasn’t until the first part of this decade that the Musar revival began, precipitated largely by the publication of Morinis’ book, followed by the author’s speaking tours. Those who heard him speak invariably would ask how they could bring Musar into their own lives. Morinis had no answer until he created a course, emailing weekly lessons to students across the continent and beyond. He later introduced more courses and other resources on the website of The Musar Institute, a nonprofit organization he started in 2004. Some of Morinis’ students went on to do their own teaching, among them Rabbi Pamela Wax, who added Musar programming as spiritual care coordinator of the Jewish Healing Center at the Westchester, New York Jewish Community Services.

For the first time Musar was attracting non-Orthodox Jews, among them Jews who’d embraced Eastern practices such as meditation and yoga or had not found a discipline for personal development in the Jewish sphere. In Musar they were discovering an authentically Jewish spiritual path, and one that didn’t require knowledge of Hebrew or a strong background in religious texts.

It’s been more than four years since Rabbi Nancy Wechsler-Azen introduced Musar to Congregation Beth Shalom in Carmichael. “Musar students have since become part of the temple leadership,” says Rabbi Nancy, as she’s called, and “have greater capacity for listening during temple business matters.” Plus, “with the built-in understanding and support for practicing Musar, [when a problem arises], instead of an immediate reaction, there tends to be more silence and contemplation before talking.” Like the effects of Musar itself, the change often is subtle, but it “makes a difference in the overall tone of the meeting.”

In fall 2007 Rabbi Wechsler-Azen’s husband and Beth Shalom co-spiritual leader, Rabbi David Wechsler-Azen, created an all-men’s group called “Spiritual Growth for Guys: Musar for Men.” The group of seven, which meets at the temple one Sunday night each month, challenges the men to get better and better in their interactions, says Rabbi David, as he’s called. “It’s a safe forum to talk about issues they never discuss, like their relationships to others, to themselves, and to God.”

Across the continent, New York City attorney Gary Shaffer teaches a Musar class at Congregation Beth Elohim in Brooklyn (see his article, “Freedom,” p.71). Often Shaffer sends emails to students between sessions reminding them to focus on their middah, in part because they are not following the Musar practice of pairing into chevruta (study partners) who regularly check in on one another’s progress. This underscores what Shaffer believes is Musar’s challenge to Reform Jews: making time for it. “We don’t necessarily lead a Jewish-centric life as the Orthodox do. If we’ve got kids, they’re playing soccer, baseball, and basketball, maybe taking music lessons, all deemed important, and we’ve got our own busy lives.”

Musar’s traditional response to this time challenge has been to educate children in the practice. Reform educators are doing just that. Rabbi Nancy has woven a “middah of the day” into the temple religious school from pre-K to seventh grade complete with basic teacher training in Musar and lesson plans. Last fall, religious school principal Jeffrey Agron of Congregation Bet Breira in Miami, Florida began teaching a Musar course to fifteen students in the tenth-grade Confirmation class, dividing the students into small groups to discuss soul traits like patience (needed when you’re waiting in line at a store with a slow cashier or dealing with younger siblings). Agron, co-president of The Musar Institute, is now working on a formal Musar teen curriculum to present to the National Association of Temple Educators.

The Musar effort pays dividends, says Rabbi Pamela Wax. “My assumption is that I was put on Earth to be the best ‘me’ I can be. Musar is a way I attain holiness and draw myself closer to what God expects of me.”

Leonard Felson is a writer based in Hartford, Connecticut.