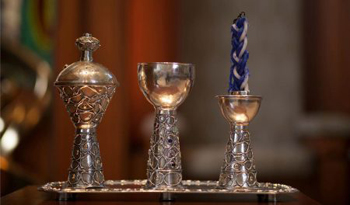 As Thomas Cahill teaches in his book “The Gift of the Jews” the great contribution that Judaism gave the world was to see time as linear, with beginnings and endings and stations along the way. The concept of a rest day every seven days was revolutionary in the thinking of an ancient world that viewed existence as an endless, dreary cycle. Havdalah is the ceremony that marks the end of a special period of rest, Shabbat or a Festival, and in many ways expresses our reluctance to go back to the routine of the work week.

Havdalah , or separation, is a colorful and moving ceremony that involves a multi-wicked candle, an overflowing cup of wine and a container of fragrant spices. The ritual has led to the creation of beautiful Havdalah sets--candle holders, spice boxes and wine goblets. However, it is also permissible to use such common objects as several long matches held together for the light, an orange with cloves for the spices, and even juice or coffee as substitutes for the wine (using a different blessing).

In this short posting I would like to focus rather on the music and the text of Havdalah, which is far more than just the blessings over the wine, the spices and the candle.

Hineih El Y’shuati…Behold the God who gives me triumph! (MishkanT’filah p. 610) is the prayer that begins Havdalah, and expresses our trust, our confidence, and our faith that God will deliver us and allow us to “joyfully draw water from the fountains of salvation”. It recalls the time of Esther and Mordechai when “The Jews enjoyed light and gladness, happiness and honor” and says: “So may it be for us. I raise the cup of deliverance and invoke the name of Adonai.” The beautiful setting of this prayer composed by choirmaster, Zavel Zilberts in 1923 incorporates the traditional Ashkenazic melody or nusach for Havdalah, an Eastern-European mode leading to a major scale. Here it is sung by Hazzan Ben-Zion Miller and accompanied by the Barcelona Symphony, available through the Milken Archives. Listen

Another setting, by Safam, reflects more of an American interpretation of the textual ideas of joy and triumph. It is from the group’s CD A Brighter Day recorded in 1986. Listen

Havdalah continues with four blessings: over the wine, over the spices, over the light of the candle, and finally over the separation of the sacred from the mundane. We need to acknowledge the great contribution of songwriter Debbie Lynne Friedman, (z”l) whose nigunreally brought havdalah out of the mothballs for most North American Jews. Starting in the summer camps and youth conclaves, Debbie’s melody is universally sung in all branches of Judaism and has achieved what might be called “traditional status”. Listen

Another setting of the ritual, written by Cantor Charles Osborne, uses the modes of Sephardic Jewry. It is sung here by Cantor Steven Stoehr from the CA/USCJ CD project, The Spirit Series produced by Cantor David Propis: The Sephardic Havdalah. Listen

The hymn that follows the blessings is a medieval poem, which states:

The day moved on like a date palm's shadow
I shall cry out to God to fulfill for me
What the Watchman said:
"The dawn has come, and also night".

Your righteousness is lofty as Mount Tabor.
As for my sins, may You overlook them
Like a bygone day that passes on
And like a watch of the night.

It is an acrostic with the first letters of each verse beginning with verse 2 combining to spell out the name of its author, Yitzchak Hakatan, Isaac the Younger. In the well-known Ashkenazic folk tune, the hymn is combined with the added greeting “Shavuah Tov” (Have a good week) (The complete text of the Hebrew can be found on pages 635-636 in Gates of Prayer.) Listen

Many musical versions of the poem have been written. One particularly nice one, written recently by Israeli musician Yehoshua Engleman, is found here.

Here is another setting in a Sephardic mode, which I wrote for Safam for our 1995 recordingOn Track. Listen

Havdalah ends with a call to Elijah the prophet asking him to come soon in our day and bring the Messiah, so that peace and holiness will be ever-present and we will have no need again for havdalah (separation). That hoped-for time is called: Z’man shekulo Shabbat (a time of continuous Sabbath). I will leave it to some other posting to explore the many tunes of Eliyahu Hanavi.

Here is the well-known folk version which we sing every week and prominently at the Passover seder as well. I will tell you that in 1957 as a ten year old boy soprano, I once sang Eliyahu Hanavi in a duet with my buddy Steve Glasser, as an audition piece for the Ted Mack Amateur hour. We made it all the way to the finals. Listen

Robbie Solomon serves as Cantor of Baltimore Hebrew Congregation, and he is well-known for his work with the Jewish musical group SAFAM. Robbie is also a member of the Executive Board of the American Conference of Cantors.