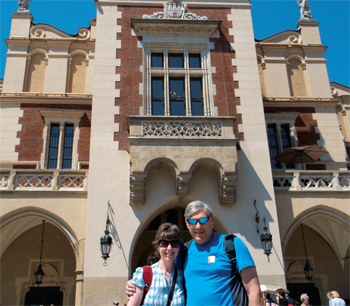 Last Spring, my husband Ken and I decided to tour Eastern Europe to experience the part of the world our ancestors had left behind. About four weeks before our departure, in the midst of my researching cities to visit, I picked up the mail—and lo and behold, there was the Spring 2013 issue of Reform Judaism magazine with its “World Jewish Travel Guide” Cover Story and an article by Rabbi Gary Bretton-Granatoor offering to connect readers with Progressive synagogues worldwide. I was thrilled!

Within 20 minutes of my emailing Rabbi Bretton-Granatoor of the World Union for Progressive Judaism, he sent me the names of the rabbis, presidents, and administrators of the Progressive congregations in Warsaw, Budapest, and Prague. He also asked them to assist me in planning my itinerary. Before long, I was exchanging emails in English with welcoming people across the world.

We arrived in Warsaw on a Friday afternoon, after traveling more than 18 hours. We were exhausted. There was really one motivation to refresh ourselves and head out to Beit Warszawa: Rabbi Gil Nativ was personally expecting us at services that evening.

One of the most harrowing taxi rides in my life ended in front of a non-descript commercial building with a sign reading “Beit Warszawa.” But where was the entrance to the synagogue? We wandered into one doorway, only to be redirected to another building farther back from the street. There, a nice older gentleman in a white jacket and kippah who didn’t speak a word of English led us upstairs.

The small prayer space was filled almost to capacity with 50 people, mostly young professionals and a few “elder statesmen” sitting in rows of chairs. We took the only open seats—two overstuffed armchairs toward the back.

It was easy to feel part of the service. Although the readings were in Polish, Rabbi Gil Nativ spoke to everyone in English—whether that was because the vast majority of congregants understood English, or because the congregation is committed to making English-speaking visitors feel included, I don’t know, but it was wonderful for us. The service was full of singing, the songs entirely in Hebrew, and most tunes, such as V’Shamru, familiar to us, so we gladly sang along.

Every Kabbalat Shabbat service at Beit Warszawa is typically followed by Kiddush and a buffet dinner. Rabbi Nativ had invited us to join the 40 people partaking in authentic Polish cuisine—salads, soup, cheeses, pierogies, dumplings, and desserts—along with discussion and camaraderie. At our table, a man regaled us with stories of Polish history, the modern Jewish community in Warsaw, and a legend we’d never heard of: a 16th-century Jew named Saul who became King of Poland for a single day while the reigning council of the time decided between three contenders to the throne! (We later found the legend documented on Wikipedia.)

In a surprising coincidence, my husband Ken discovered that the father of Beit Warszawa congregant Michael Levi had designed a refinery in the Bahamas that had been recently purchased by my husband’s friend’s company. At the end of the evening, Michael drove us back to our hotel, an unexpected gesture of kindness that also allowed us to see the National Stadium, Old Town, and the Royal Castle all lit up at night—experiences we likely wouldn’t have had on our own.

The following Friday we arrived in Budapest. Making Shabbat services here was going to be easy, we thought. After all, one of the two Progressive synagogues, Sim Shalom, was only down the street from our hotel.

Street address in hand, we walked back and forth, back and forth—where was Sim Shalom? Finally, we realized the congregation had to be housed within a nearby apartment building that had an inner courtyard. There we found the temple’s call button and were buzzed inside.

We walked up the stairs and into the second-floor apartment. An open room led into a second large room that had been set up for the service: two rows of chairs shaped into a semi-circle, and a small table with Shabbat candles and a Kiddush cup. Ken and I chatted with about a dozen friendly, mostly young people who spoke English, including Rabbi Katalin Kelemen, whose husband Jesse Weil, the synagogue’s treasurer, had written to me, welcoming us to Sim Shalom.

Rabbi Kelemen then announced to the congregation that Ken and I were visiting from the United States, and invited me to light the Shabbat candles. What an honor, to participate in the same ritual in Budapest that I had done countless times at my home congregation in New Jersey. I immediately felt "at home."

Like at Beit Warszawa, most of Sim Shalom’s service was musical, led on vocals and guitar by Cantor Miklos Budai and accompanied on drums by a young congregant named David. Except for the melody for the Sh’ma, the songs were mostly unfamiliar to us, but we caught on and sang along. We especially loved the congregation’s version of Lecha Dodi, a catchy Chasidic melody with a “Ya ba ba ba bam” refrain that transported me into the imagined shtetl life of my ancestors. All the prayers were chanted in Hebrew, and we knew them well. The service was in both Hungarian and English, and although we didn’t understand the Hungarian readings, both Ken and I were honored with English readings, contributing to our sense of belonging.

Afterwards Sim Shalom held a pot-luck supper in lieu of an oneg. Our contribution was a cake we’d purchased at the Great Market Hall. Unbeknownst to us, the rabbi’s birthday was that week, so our cake served as her impromptu birthday cake. And Ken was also celebrating his birthday that week, so it became a joint celebration!

The next Friday afternoon we were in Prague, sightseeing. We’d planned to return to our hotel and freshen up before attending Kabbalat Shabbat services at Bejt Simcha, but we’d packed in too much touring and time had gotten away from us. We were tired, windblown, outfitted in sneakers and backpacks, and nowhere near our hotel—and services would be starting soon.

My husband and I weighed the options. He felt uncomfortable attending services in such casual clothing; I didn’t want to miss Shabbat in Prague. “Besides,” I pointed out, “They are expecting us! Surely it must be more important to attend the service ‘as we are’ than not to come at all.” I reminded him, too, of our home congregation’s relatively recent tradition where some services are designated “come as you are,” imparting the message that it is more important to worship together then to focus on dressing up for the occasion.

We chose a third alternative: arriving at the synagogue before the service and apologizing to the members for not having had time to make ourselves more presentable. If, then, it didn’t seem appropriate to stay, we’d leave.

We walked through Prague’s Jewish quarter, passing the Pinkas Synagogue with its cobblestone drive and white stucco exterior; the King Solomon Kosher Restaurant, fronted by a clock that uses the Hebrew alphabet in lieu of numbers; and the Maisel Synagogue, set back behind an iron fence. When we got to Maiselova 4, the building where Bejt Simcha rents space for services, the young man who opened the door for us could not have been more welcoming. “By all means,” he said, “please stay and pray with us; it does not matter how you are dressed.”

People started arriving, members as well as Americans and Canadians visiting Prague. We struck up a conversation with David, a 20-something Prague native who told us excitedly, in good English, that he’d be in the U.S. in the summer, having gotten a job teaching Torah to young people at the URJ’s Kutz Camp in Warwick, New York. Astonishingly, our daughter, Debra, was going to be head songleader at the same camp, and the two had already been in touch on Facebook! It is a small Jewish world indeed.

About 25–30 people prayed with us. The siddur was in Hebrew and Czech—but even though I didn’t know a word of Czech, we were reciting the Hebrew prayers in the same order as we did at Temple Emanuel in Cherry Hill, New Jersey and singing the same melodies for the Sh’ma, Lecha Dodi, and V’Shamru. Closing my eyes during some parts of the service, I could have been in New Jersey instead of across the world.

In our journey to the land of our ancestors, we saw many beautiful landmarks, Shoah memorials, and remnants of Jewish communities long past. I realize now that the experience would not have been complete without our also connecting to a living Judaism, as we did while worshipping with our brethren in Warsaw, Budapest, and Prague on three successive Shabbatot. And, we could not have done this without assistance from the World Union for Progressive Judaism (WUPJ). Unlike U.S. congregations that typically have stand-alone buildings, most of the Eastern European congregations we visited used prayer spaces tucked away in apartments or courtyards well-off the street. Some did not exhibit signage indicating that a house of worship was within. For their own protection, many synagogues outside North America do not welcome strangers who have not made advance arrangements. Had we not connected with the WUPJ, I’m not sure we would have ever made it to services.

We were also struck by how comfortable we felt. Each Jewish community warmly welcomed the stranger into their midst. More people than we expected spoke English, and in Budapest we played an active role in the service. The presence of Hebrew in prayer and song united us in a common bond with our host communities. And it was inspiring to meet other Progressive Jews who worship as we do, share our values, and are part of our Jewish family.

I’m already dreaming about my next Progressive adventure abroad!

Eileen Winter is a member of Temple Emanuel in Cherry Hill, New Jersey.