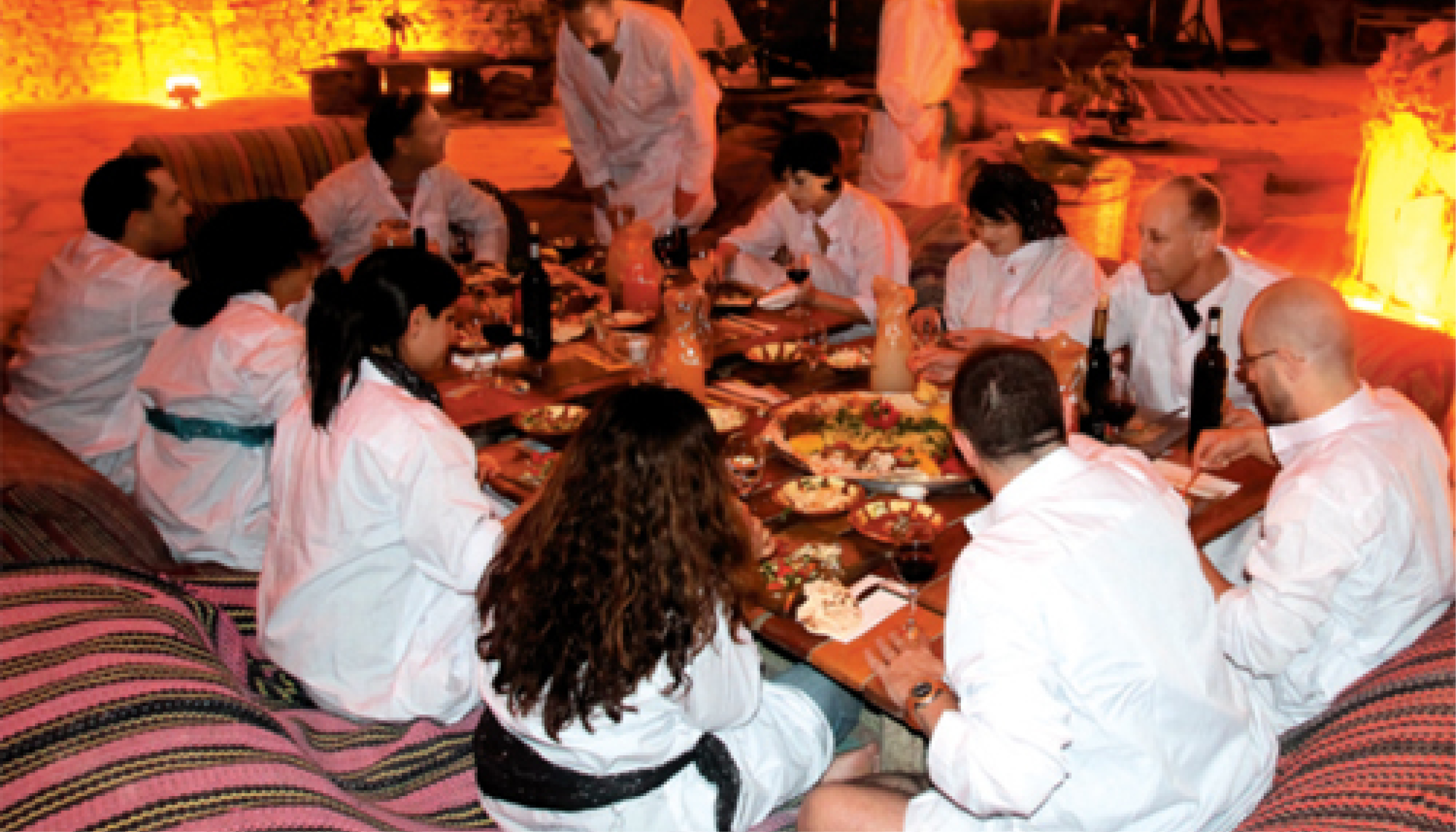 Unique and innovative, Israeli cuisine draws from the culinary traditions of Jewish immigrants from 80+ countries, and spices them with Middle Eastern and Asian accents. Here's just a sampling of the inventive venues and menus.

If you're a sushi lover, you're not alone in Tel Aviv. With 1,000 sushi restaurants, the city has the world's third highest sushi consumption rate per capita. One of the city's most innovative sushi spots is Yakimono, where you can order such original dishes as Inari, a sweet tofu pocket filled with spicy raw fish: salmon/tuna/yellowtail.

In the past, Tel Aviv sushi restaurants tended to employ Asian chefs with highly trained skills, but there are growing restrictions on the number of foreign workers allowed to work in the country. And so an innovative way has arisen to meet market demands for perfectly prepared sushi: the Israeli government has allocated funds to teach demobilized soldiers Asian cooking skills.

At Yakimono, however, the award-winning sushi masters remain Japanese.

In 1995, owner Shalom Maharovsky opened Mul Yam (Across the Sea) in what was then a largely neglected area of the city. Today it is one of Israel's most trendy restaurants, recognized for its award-winning chefs who have studied the world over.

Executive Chef Yoram Nitzan says he is "constantly looking for new and innovative ways to combine cutting edge cooking techniques with the freshest ingredients-the ingredients being the true star." Israelis, he says, are open-minded about avant garde cuisines, and therefore happy to try out his ravioli made with squid ink or sea urchins.

You'll find Max's on Tikvah Street in Tel Aviv's oldest outdoor food market-Shouk Hatikvah. Food and hospitality are the passions of Max's ebullient owner, Max Bar Lev, who's trained some of Israel's top chefs and culinary students. He offers original takes on traditional ethnic dishes, such as jachnun (a Jewish Yemenite pastry traditionally served on Shabbat morning), sweetening it with date syrup instead of sugar. "You could say we are going back to basics," Max says, "but finding new spins to make it modern."

In Jaffa, a multicultural seaside suburb of Tel Aviv, one of the most popular eateries is renowned for innovative twists on Libyan cuisine, which fuses North African flavors peppered with Italian and Arabic influences. The restaurant's specialty is shakshuka, a traditional North African dish consisting of eggs baked in a sauce of peppers, tomatoes, and chilies that Dr. Shakshuka has distinctively modified by adding mushrooms, eggplant, chicken, and/or merguez sausage. The small, quaint space is reminiscent of Aladdin's cave; copper pots and pans intermingle with photographs of customers, including Israel's glitterati and IDF warriors.

Since Adam Ziv, a Jewish kibbutznik, and Alaa Sawitat, an Arab Muslim, opened Bouza (Arabic for ice cream) last July in northern Israel near the city of Nahariya, they've attracted a steady stream of customers who came out of curiosity and then returned for the innovative ice cream made from fresh ingredients grown by local farmers. The menu includes some uniquely Middle Eastern flavors- pomegranate, pine nuts, even hummus. Yes, hummus. Hey, this is Israel and hummus is a staple!

As an added bonus, Ziv and Sawitat serve up conversation along with their scoops, believing that delicious ice cream can smooth the way to talking peace.

Here in the ancient city of Safed, the birthplace of the Kabbalah movement, visitors from allover the world flock to Mr. Lachuch (also called Ronen at Azamra) for a taste of lachuch-thick, richly textured Yemenite-style pancakes made from semolina and white flour-which the chef/owner, whom everyone knows as Ronen, flavors with strips of fresh peppers, eggplants, zucchini, chilies, and secret spices from the old country.

Ronen immigrated to Israel with his parents in 1949 during "Operation Magic Carpet," when the majority of Yemenite Jews were airlifted to the newly established Jewish state, and later started the kosher restaurant as a homage to his heritage. Now the quintessentially Yemeni-looking man, sporting a bearded smile that meets dark, twinkling eyes, is instantly recognizable as a fixture in Safed, dispensing Jewish wisdom along with lachuch.

"I want every Jew who walks in here to see that God is walking with them," Ronen explains. "I want them to feel pride in their heritage, and the connection that a Jew has to Israel."

Mukhtar-Usafiya Village in the Galilee

Not much is generally known about the customs and beliefs of the Druze people, except that they are fiercely loyal to their host countries. Here, in the village of Usafiya in the beautiful, mountainous Carmel region, visitors can catch a glimpse of their culture through the sharing of food.

A Druze guide meets arriving visitors and leads them on the "El Carmel" culinary tour. As you walk along thealleys of the village, passing the prayer house, the deserted church, and the ancient olive press, you'll hear stories about Druze beliefs and customs. The tour ends in a Druze home, where you'll converse with family members around the taboon (traditional oven) and relax in the madpa (guest room) while tasting authentic Druze food prepared by village women. Be sure to try the knafeh (also known as kunafeh), the Middle Eastern answer to cheesecake, combining goat milk cheese, shredded philopastry soaked in sweet syrup, and rose water.

After immigrating to Israel from Ethiopia, Chef Elem Akuba was inspired to "lift the lid off of Ethiopian fare," introducing the citizens of her new nation to such specialties as wat, a spicy meat stew served on injera (a traditional Ethiopian flatbread made with fermented teff flour).

One of Shegar's specialties is lamb cooked in onion and green peppers. Elem points out that "Every extra second it is kept on the heat makes it come out completely different. Always, I have to choose when to take the food off the fire."

Dining here, you'll enjoy a feast fit for the Queen of Sheba.

"Mediterranean food is smiling food," says Ezra Kedem, executive chef and owner of this high-end French-Mediterranean eatery hailed by Frommer's as "the finest restaurant in Jerusalem." He believes that "the fresh flavors of our sun-grown produce make Israel the world's next kitchen to explore. We combine our wonderful produce in ways that give a modern twist to traditional foods." Israelis, he adds, "are open to culinary innovations; they're well traveled and have adventurous palates." For example, after he pioneered eggplant carpaccio-eggplant with tahini and spices-it became such a hit, it is now served in other fine restaurants.

The culinary innovations one finds throughout Israel say a lot about the society itself-culturally diverse, passionate, spicy, inventive, and fearless.

Rolene Marks, a frequent commentator on Israel radio, is part of Media Team Israel, an advocacy body that fights for balanced coverage of Israel.