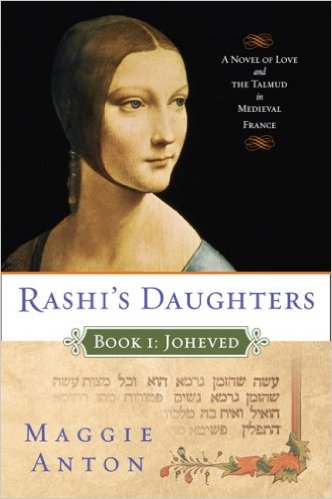 Maggie Anton was born in Los Angeles and raised in a secular, Socialist household. She grew up with little knowledge of the Jewish religion and discovered Judaism only as an adult. In the early 1990s, Anton learned about a women’s Talmud class taught by Rachel Adler, now a professor at Hebrew Union College in Los Angeles. For five years, she and several other women studied Tractate B’rachot weekly with Adler. In 1997, Anton became intrigued with the idea that Rashi, one of the greatest Jewish scholars who ever lived, had no sons but only three daughters, and that their sons, Rashi’s grandsons, became the Tosafot, the great twelfth-century Talmud commentators. Much has been written about Rashi and the Tosafot, but almost nothing of the daughters except their names and the names of their husbands. Legend has it that Rashi’s daughters were taught Talmud in a time when women were traditionally forbidden to study the sacred texts. Thus was the idea for Rashi’s Daughtersborn.

Rashi’s Daughters: Jocheved is a work of historical fiction that chronicles the lives and loves of Rashi’s family in eleventh-century France, focusing on his three daughters, Joheved, Miriam and Rachel. Joheved is the first volume of a projected trilogy, each based on a daughter of Rabbi Salomon ben Isaac, whose initials spell Rashi. In spite of the widespread fame that Rashi attained during his lifetime and the many studies of his works by generations who came after him, precious little is known about his personal or family life. Set in the town of Troyes, the capital of the French province of Champagne, the story explores what life might have been like more than 900 years ago.

Maggie Anton weaves her knowledge of history and Talmud with her rich imagination to create a captivating story of life, love and learning in a bygone Jewish world. In an era when educating women in Jewish scholarship was unheard of, Rashi secretly taught his daughters the intricacies of Mishnah and Gemara.

At the heart of this book is Joheved, the eldest of the three girls, whose mind and spirit are awakened by learning. She keeps her passion for learning and prayer hidden, even from her betrothed, Meir ben Samuel.

Learn more about Maggie Anton and her book.

A biography of Rashi

A brief history and discussion of the impact of Rashi on Jewish life.

An example of Rashi’s commentary on Torah text

M. Rosenbaum and A.M. Silberman, eds., Pentateuch with Targum Onkelos, Haphtaroth and Prayers for Sabbath and Rashi's Commentary, Translated into English and Annotated. 2 volumes (London: Shapiro, Vallentine and Co.,1946). Recently reprinted in one volume as Chumash with Rashi's Commentary (Philipp Feldheim,1985). This is a good interpretive translation that helps readers understand the commentary with a minimum of notes.

Marlene Myerson, RJE, is the Union for Reform Judaism Regional Educator for the Canadian Council of Reform Judaism and former president of the National Association of Temple Educators.