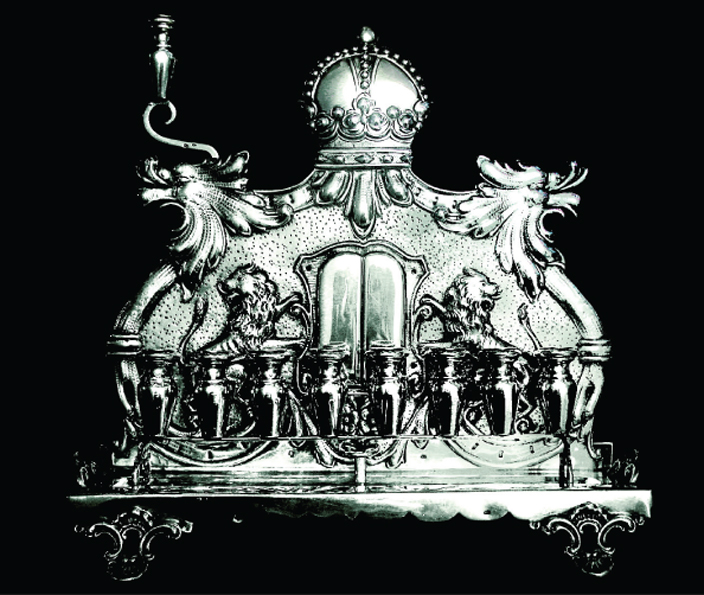 This menorah belonged to my great-grandfather. Born in Nowy Korcyzn, Poland around 1869, he lived most of his life in Vienna until leaving Austria in 1938 and later settling in the United States. It has passed down to my grandparents, father, and me, and holds a very special place in my heart. My father and I would like to more about it.

Wow! This is a magnificent piece of art, notable for the very unusual griffon (dog breed) heads on each side. It was made in Vienna between 1870 and 1900. Its hallmarks-the head of Diana in a clover frame as well as the artisan's mark-started in 1867 and ended in the 1920's; however, from past experience, I believe the piece was created in the earlier years. I have seen examples of this bench-type style of menorah (shaped like a bench or a couch)-with lions flanking the Decalogue, containing dedication inscriptions-that date to the 1890s. It is made of 800 grade silver, meaning it is 80% silver and 20% other alloys-the silver standard in Austria at the time. (In contrast, in America we are on the English silver standard, which is known as sterling, and also known by 925 silver, meaning it is 92.5% silver and 7.5% other metals.)

While the Austrian bench-type Hanukkah lamp is fairly common, the addition of the decorative griffon heads (which have no religious significance) enhances its value. Value: $3000.

Thank you. The family history of this menorah is what we truly value. When we light the menorah, it is as if our European ancestors are with us.