When the Jews were expelled from Spain in 1492, there were forty thousand Jews on the island of Sicily, a Spanish territory at the time. The Jews left the island with the culinary traditions of their ancestors steeped in Moorish customs. The people of northern Italy were not accustomed to eggplant. They were fearful of this fruit, which they thought had the power to make you go mad, and they also viewed eggplant as "Jew food." As a result, any old eggplant dish from Italy had its roots in a Jewish kitchen.

One of the most popular Italian eggplant dishes is caponata, an eggplant relish so ubiquitous that it can be found in cans on our own supermarket shelves. Caponata is actually a Jewish Sabbath dish. The vinegar and sugar preserve the mixture so that it can be made in advance of Shabbat and served at room temperature for the s'udah sh'lishit meal Saturday afternoon. 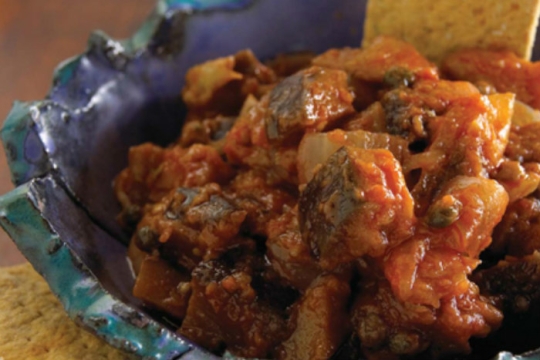