Until World War II, the largest Jewish fishing fleet in the world was based in Thessaloniki. With more than 250 varieties of kosher fish swimming in the Mediterranean, Jewish cooks were only constrained by the size of the fish as to which cooking technique to employ. Small fish such as sardines and ancho­vies tended to be deep-fried whole; medium-sized fish such as sea bass and red porgy were baked, sautéed, and grilled; and Mediterranean swordfish and tuna were baked or grilled.

In Greece this dish is most often made with shrimp. This version takes the bright colors and flavors of this dish and incorporates fish indigenous to Greece.

In this recipe, thicker fish such as branzino (Mediterranean sea bass), tuna, or Mediterranean swordfish are recommended so that they can withstand the searing and flaming without drying out. Sole, sea bream, mullet, and orata indigenous to the Mediterranean may also be used, if they are not too thin. 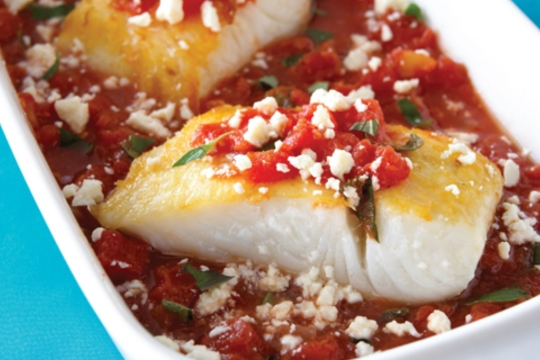