This recipe is featured in Tina Wasserman's newest book, Entrée to Judaism for Families filled with tools to help children learn to cook with confidence, with clear, step-by-step instructions for every recipe and tips for adults to make the experience safe and rewarding.

The majority of Jewish immigrants who came to the United States in the last 150 years trace their roots to Germany and Eastern Europe. Apple trees grew all over this region, and Jewish cooks used apples in dishes to make them special for Shabbat, Jewish celebrations, and Jewish holidays. Harvested as one of the first fruits in early fall, when Rosh HaShanah occurred, apples were dipped in honey to symbolize a sweet and fruitful year ahead. Since they stored well, apples were eaten all through the winter and were made into applesauce.This was the original topping for potato latkes in the early 1800s, when potatoes became popular and latkes were served, first in Germany and later in Eastern Europe and Russia, at meat meals for Hanukkah. (Sorry, no sour cream!)

Cooking the apples with their peel (where the flavor cells are located) gives it a pretty pink color and provides a natural sweetness, which means you can use very little or no sweetener. This recipe should be in every home’s repertoire. It doesn’t get fresher than this, and it is so easy to make, especially if you have a food mill. 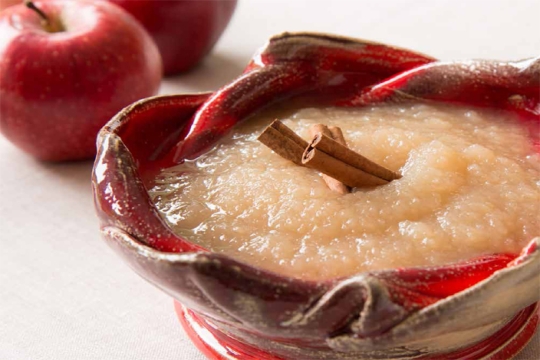