Did you know that India's Jews come from four distinct groups and can trace their roots there back to ancient times? As in all Jewish communities around the world, Indian Jews translated their culinary tastes and the laws of kashrut to embrace the foods of the region.

In India, religion stipulates the vegetarian diet.  About 80% of the population in India is Hindu, abstaining from meat.  Hence, the focus of most dinner tables is a celebration of vegetables, lentils, and chickpeas. Nothing says Indian cuisine quite like the classic and aromatic chana masala (literally "chickpea spices").

This vegan, gluten- and oil-free version offers healthy, satisfying protein, and a warming, comforting blend of spices, including cumin, ginger, and turmeric. 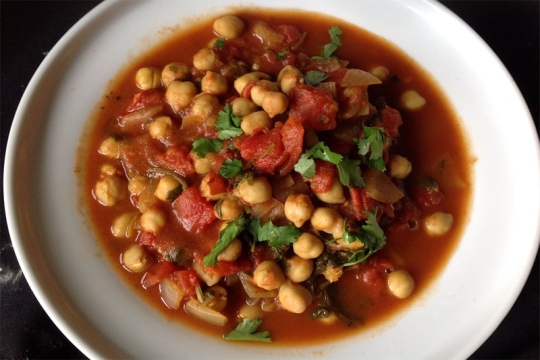 Chef Katie Simmons (she/her) is a classically-trained personal chef in Chicago. Her journey to cooking has been a winding path from Kentucky to backpacking in New Zealand through culinary school at Kendall College and working for Whole Foods Market.  Her own experience being a fitness professional finally led her to embrace a plant-based, vegan diet.