This recipe is featured in Tina Wasserman's book Entrée to Judaism for Families, filled with tools to help children learn to cook with confidence, with clear, step-by-step instructions for every recipe and tips for adults to make the experience safe and rewarding.

Many of the Jewish people of India can trace their ancestry back more than 2,000 years! Bene Israel Jews are descendants of Kohanim, or high priests, who were shipwrecked on the southwestern coast of India at the time of the Maccabees, and discovered living in the jungles of India in the 1600s. They were far removed from any other Jewish community, but they still said the Sh’ma! Another Jewish sect, the “black” Cochin Jews, claim to have been in India since the time of King Solomon, when their ancestors sailed there looking for spices. The “white” Cochin Jews and the Baghdadi Jews have only been in India for 600 years. They came for the spice trading opportunities and, most likely, to escape the Inquisition in Spain and Portugal.

This recipe uses some of the spices found in India but the use of lamb, cumin, and mint in a meatball speaks volumes about its links to the Jews of the Middle East and Spain. Obviously, matzah meal is a modern touch. Enjoy!

To make the sauce

To make the meatballs 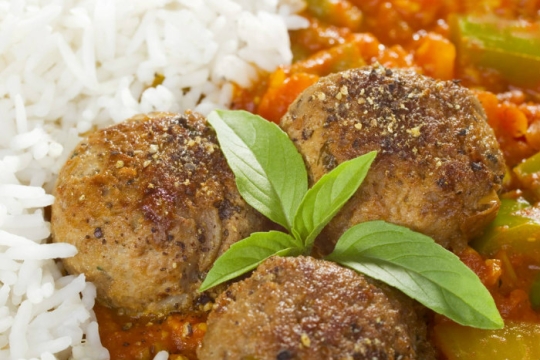