Before 70 C.E.—the year of the destruction of the Second Temple—Jews associated Passover not with matzah, but with barley, as the holiday was celebrated as a pilgrimage festival at the beginning of the barley harvest. Newly harvested barley could not be eaten until the first sheaves of grain were offered as a tithe to the Temple in Jerusalem on the second day of Pesach, which was then known as Hag Ha-Aviv (the holiday of spring). As Leviticus 23:10-11 states, “When you enter the land that I am giving to you and you reap its harvest, you shall bring the first sheaf of your harvest to the priest. He shall elevate the sheaf before the Lord for acceptance on your behalf.” Barley then served as the mainstay of the Jews’ diet because of the plant’s adaptability in Israel’s different climates and its resistance to dry desert heat. With God’s blessing, new barley crops would survive bad weather and thrive, averting famine in the land.

Ironically, the rabbis later categorized barley as one of the five chametz grains (along with wheat, spelt, rye, and oats) that were not kosher for Pesach!

One summer I created this recipe combining herbs in my garden with store produce. To make the salad more substantial, I used pearled barley as a chewy base. The herb Mexican mint marigold tastes like tarragon and pairs well with tarragon vinegar. If these ingredients are not available, you can substitute basil and sweet balsamic vinegar. 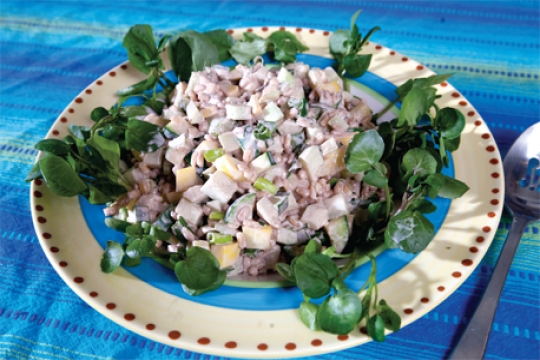