On Tu BiShvat it is customary to eat foods containing the seven species and to bless them. These are wheat, barley, grapes, figs, pomegranates, dates, and olives. Although not mentioned in Deuteronomy, almonds also figure prominently in this celebration, as they are the first tree to flower in Israel at that time of year.

Almonds are considered to be the oldest cultivated nut, dating back 10,000 years. Some feel that the first documentation of almond cultivation was in the Torah, Numbers 17:23: “There the staff of Aaron of the house of Levi had sprouted: it had brought forth sprouts, produced blossoms, and borne almonds.”

If this recipe looks similar to mandelbrodt, it could be the coincidence that Jews were sea traders, and sixteenth-century Italian sailors would bring these twice-baked cookies on long sea voyages because their dry consistency prevented the cookies from getting soft or moldy. The addition of cornstarch gives the cookie a dense, but smoother consistency, and ground almonds and oil make this cookie very hard. It's perfect for dipping into hot coffee or tea. 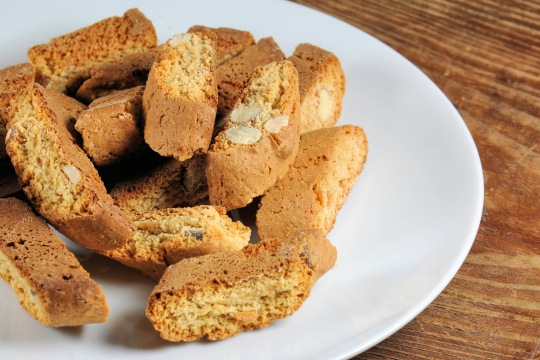