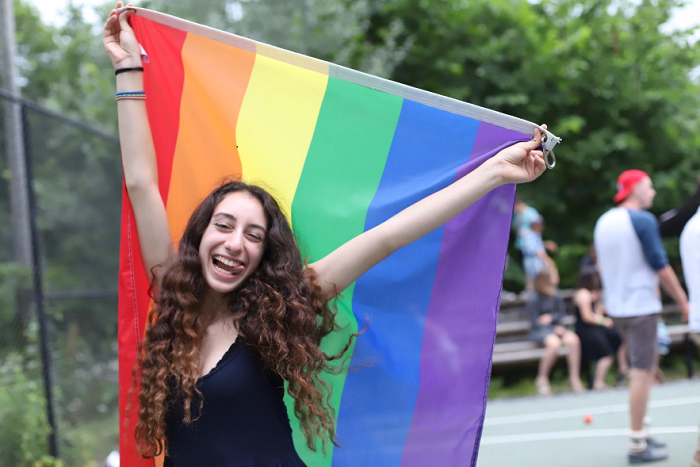 The struggle for equality for gay, lesbian, bisexual, transgender, and queer (LGBTQ) individuals is at the forefront of the modern civil rights movement. We see anti-LGBT discrimination both condoned and approved by local and federal governments on a range of topics, including employment, immigration, and adoption. Though progress is being made, much work remains.

The Fight for LGBT Equality

"Civil rights" refer to all those rights that allow a citizen to fully participate in civic society; the struggle for civil rights is a the struggle to achieve equal opportunity for all, regardless of race, religion, national origin, gender, sexual orientation, gender identity, or disability. In the 20th century, civil rights advocates worked to eliminate gender- and race-based discrimination in the housing market, voting booths, the workplace, and in government services, among other rights. Today, enshrining such equality in the law for LGBTQ families and individuals remains a chief goal of our Jewish commitment to social justice.

In a new pattern of equality that reflects cultural and political changes across the country, local, state, and federal legislatures, as well as courts, have begun to apply the principles of equality to sexual orientation and gender identity. Just as acceptance of the LGBTQ community has moved to the mainstream of North American culture in recent years, the battle for equal rights for LGBTQ individuals has become a flourishing area of the law.

The organized Reform Jewish community is committed to securing civil rights for LGBTQ individuals. We are guided by the basic belief that all human beings are created b'tzelem Elohim, in the Divine image, as it says in Genesis 1:27,

As Jews, we are intimately acquainted with the effects of bigotry. Our ancestors knew both the continuing indignities of second-class citizenship and the constant fear of xenophobic violence; this history teaches us that discrimination against any members of a community threatens the security of the entire community.

The two Biblical texts that ppponents of equality most often cited are both found in the book of Leviticus. In a discussion of sexual behavior, the Israelite men are instructed,

"If a man lies with a male as one lies with a woman, the two of them have done an abhorrent thing; they shall be put to death - their blood guilt is upon them" (Leviticus 20:13).

How can Jews resolve the apparent conflict between Leviticus's harsh prohibitions and the moral obligation to speak out against the injustices that afflict LGBT individuals? We can begin by remembering the verse that sits directly between the two: Leviticus 19:18 reads,

"You shall love your neighbor as yourself."

Leviticus approaches same-sex relationships as necessarily promiscuous, and possibly oppressive, because they never occurred in the context of loving families. The intent of these laws, then, is to forbid promiscuous relationships. Because the Torah does not directly address the issue of loving, monogamous, homosexual couples, we must turn to the more general ethical framework of the Torah for guidance. As Rabbi Harold Schulweis explains,

"Morality comes from reading the tradition in its entirety - not singling our particular verses or particular laws. It comes from highlighting the ethical rationale behind the laws, including the many interpretations of law, and it comes from wisdom, Jewish experience and history."

Position of the Reform Jewish Movement on LGBTQ Rights

The Reform Movement has been an advocate of the LGBTQ community since 1965, when the Women of Reform Judaism (WRJ) passed a resolution calling for the decriminalization of homosexuality. In 1977, the Union for Reform Judaism (URJ) and the Central Conference of American Rabbis (CCAR) passed their first resolutions on this topic, calling for "human rights for homosexuals."

Since then, the URJ, CCAR, and WRJ, along with the Commission on Social Action, and NFTY - The Reform Jewish Youth Movement, have all passed resolutions dealing with issues specific to Reform Judaism, such as inclusion of gays and lesbians in the rabbinate and cantorate, as well as national issues, such as support for marriage equality, elimination of discrimination within the Armed Forces and the Boy Scouts, and support for comprehensive non-discrimination and civil rights legislation.

Learn more about the Reform Jewish community's work for LGBTQ rights at RAC.org/lgbt.