Book Review: After One-Hundred-and-Twenty: Reflecting on Death, Mourning, and the Afterlife in the Jewish Tradition

During the past few years, I’ve thought a lot about mortality. Perhaps that’s because my retirement three years ago, after a rabbinic career of more than 40 years, forced me to think about what comes next. Or perhaps the death of my parents last year, within three months of each other, made me realize that, as the oldest child in my immediate family, I will probably be next (though hopefully, not too soon). And turning 70 this past December caused me to ask questions I had never asked about myself before: “Where did all the years go?” “How and when will the end come?” and, “Is that all there is? Is death the end of all I have experienced and accomplished?”

I know I’m not alone in wrestling with my own mortality. I was asked these questions many times during my rabbinic career as people aged and as loved ones died – but never did I think they related to me personally. Now I find myself looking for answers to these questions, and I’ve found answers in Hillel Halkin’s After One-Hundred-and-Twenty: Reflecting on Death, Mourning, and the Afterlife in the Jewish Tradition (Princeton Press, 2016).

Halkin, an Israeli author, translator, critic, and journalist, has written a deeply personal book. His frankness about his own difficulties in coming to terms with his parents’ deaths and traditional Jewish rituals, such as observing shiva (the seven-day mourning period that begins on the day of burial), give readers permission to wrestle with their own fears, doubts, and personal experiences with death and dying. The author makes it clear that his perspective is that of a nonobservant Jew, yet he is an extraordinarily knowledgeable and curious one.

He asks, “How can a life that has existed cease to exist without a trace? How can the universe have no memory of it?” The search for answers leads him to the Jewish texts that wrestle with Jewish notions of the afterlife.

Halkin has given us a book that is beautifully written and amazingly compact given its scholarship, which is not surprising given the author’s comfort with traditional Jewish texts. In After One-Hundred-and-Twenty, he looks at Torah, biblical-period writings rejected by biblical redactors, Talmud, and Midrash to see what they say about death. To understand what death meant to our ancestors and how they evolved ideas about the after-life, Halkin explores what Jewish life was like during different periods of history, from biblical times (Job, Kohelet, the apocryphal book of Enoch I, and early Christian writings) to the Middle Ages (Sa’adia Ga’on, Maimonides, the Zohar, and Joseph Caro’s Shulhan Arukh). Along the way, he explains the development of Jewish laws and customs pertaining to death and mourning.

What makes Halkin’s books different from others on this subject is the extent to which it contains the author’s personal stories of grieving (or not grieving), and the prescribed rituals he chose to observe (or not).

Among the most touching passages in the book is Halkin’s description of conversations with his wife concerning the purchase of burial plots for themselves near their home in northern Israel. Why were they needed? Why now? To what extent would plots and future headstones ensure that the Halkins would be remembered by family and others? Is it even important that we be remembered?

They delayed until two plots were available in the perfect spot. The certificate of sale sent to their home begins: “The above has purchased, for use after one-hundred-and-twenty, a grave site in the cemetery of Zichron Ya’akov….”

The term “after one-hundred-and-twenty” relates to the age of Moses when he died. It’s a traditional way of saying “when he/she is dead and gone.”

Having purchased plots, Halkin writes, “…you might say we’re all set. But we’re not, not at all.” Life continues to throw curve balls at us, and we continue to struggle with what it means to live and what it means to die.

It so happens that a few weeks ago, my wife and I received certificates in the mail for our newly purchased graves in Temple Israel’s cemetery in Westport, CT. It opened with, “The above has purchased, for use after one-hundred-and-twenty, graves in plot 601, graves A & B.”

One might say we’re all set. But we’re not, not at all.

I am very grateful to Hillel Halkin for dealing in such a personal and effective way with a subject that has always been troubling to me, and to many others. During my 40-plus years as a pulpit rabbi, I sensed that whatever I said to a person near death or in mourning for a loved one was never quite right. Death will always remain uncharted territory, but now, thanks to Hillel Halkin, we have a guide. 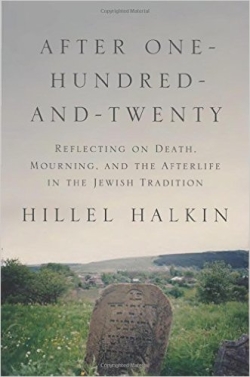