Book Review: Anna and Tranquillo: Catholic Anxiety and Jewish Protest in the Age of Revolutions

While the title of Kenneth Stow’s book, Anna and Tranquillo (Yale University Press), may sound like the name of an Italian opera, it is actually the story of the Papal State’s 300-year effort to forcibly convert the Jews of Rome to Catholicism. The officially sanctioned campaign included kidnapping youngsters, harsh incarceration, and mind manipulation.

The book centers on the case of Anna del Monte. On May 6, 1749, Vatican police arrested the 17-year-old Jewish girl at her family home in Rome’s Jewish ghetto. She was placed in solitary confinement for 13 days inside the dreaded Casa dei Catecumeni, the House of Converts.

Anna was forced to listen to hours and hours of conversionary sermons, a tactic priests, including Cardinals, employed to compel physically and psychologically battered prisoners to affirm “the one true faith” at the baptismal fount.

Stow, a professor emeritus of History at the University of Haifa and a research associate at Smith College, begins his book with the first English translation of Anna’s personal diary, written shortly after she was released from the Casa dei Catecumeni.

Anna never married and died in 1779 at the age of 47. Fourteen years later, her brother, Tranquillo, added to his sister’s diary account a strong demand for the full emancipation of Roman Jews and an end to the dominance of Catholic canon law. The book was published in Italian during Tranquillo’s lifetime.

It would take another 77 years before the Papal rule finally ended, with the establishment of the secular Italian Republic in 1870.

Anna del Monte was a rarity among the Casa’s “guests” because she refused to abandon her faith and family:

“On the tenth day, they brought me before two priests, who asked again (whether) I wanted to become a Catholic. …I felt my blood freeze, and I was unable to respond, while they, seeing that I was beaten down, wholly, began to interrogate me…. God helped me to revive, and I answered with force ‘all of this is nothing. I was born and will die a Jew.’”

The diary comprises the first quarter of Stow’s 294-page, thoroughly documented book. He describes how various popes during the 18th and 19th centuries vigorously fought against granting Jews full emancipation and how they opposed “dangerous” Enlightenment ideas such as freedom of conscience and religious liberty.

Stow makes clear that many of Rome’s Jews, like Tranquillo, were emboldened by the momentous revolutions in France and America and demanded the same human rights for themselves. Nevertheless, the Jews in Rome, the oldest continuous Jewish Diaspora community in the western world, remained trapped in the ecclesiastical Papal State for nearly a century after the American Revolution.

The book ends with Stow’s description of Anna’s role in history:

“Anna herself may have been a dot on a broad historical canvas, but her experience marks the swan song of a waning world order… (Tranquillo asserted his sister’s defiance and bravery) was a protest against ‘ the many difficulties and the bitterness brought about by the legal, economic, moral and intellectual (attacks of the papacy that created)…the exceptionally sad state of the Rome Jewish community.’”

A personal note: As director of the American Jewish Committee’s Interreligious Affairs department, I made many trips to the Vatican and was an active participant in the positive revolution in Catholic-Jewish relations that began in the 1960s with the Second Vatican’s Council’s historic Nostra Aetate Declaration, which called for mutual respect and understanding between Catholics and Jews and condemned all forms of anti-Semitism.

Each time I was in Rome, I spent some solitary time in prayer and remembrance inside San Gregorio della Divina Pieta, a small Catholic church located near the former ghetto and Rome’s Great Synagogue. It was in this very place where Jews had been compelled to attend weekly services and subjected to conversionary sermons and derogatory messages about their Jewish faith. Their only defense, historians tell us, was to place wax in their ears.

This well-researched volume is a stark reminder of how much progress we have made in Catholic-Jewish relations since those dark days witnessed by Anna and Tranquillo. 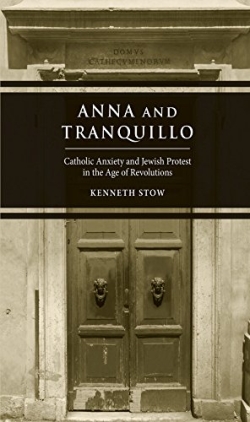