Journalist and novelist Meir Shalev approaches the biblical text from the perspective of a secular Israeli with a great appreciation for and familiarity with the Hebrew Bible. Bringing a storyteller’s sensibilities and a keen eye for details to his reading of biblical stories, Shalev also expresses a deep annoyance with the rabbis of the Talmud for “whitewashing” biblical characters at their least heroic moments. Those problematic biblical scenes are precisely the ones that engage him most, for the moral and psychological questions they raise, as well as for the skill with which they are depicted.

Beginnings is a provocative, stimulating, and idiosyncratic collection of essays, each one building out from the first appearance of a single word—the first love, the first hate, the first dream, the first king—and moving on to an exploration of other stories linked to that category. The first love mentioned, for example, is Abraham’s love for his son Isaac, whom he is called to sacrifice on Mount Moriah. Shalev deals with the plain meaning of the text, but also shares his reactions to it. Concerning the binding of Isaac, known as the akedah, he writes: “I don’t think the story is intended to combat the practice of human sacrifice, but rather to demonstrate how the obedience of the Bible’s most obedient believer may lead into the darkest of alleys.”

More to his liking is Jacob, who wants specifics when he bargains with God: “If God remains with me, if He protects me on this journey that I am making, and gives me bread to eat, and clothing to wear, and if I return to my father’s house, the Lord shall be my God.” According to Shalev, “Jacob’s very first word—‘if’—announces to God that here is a new type of believer.” Jacob understands that God also needs humans in order to be present in the world.

Shalev’s assessments are often as acerbic as they are astute. King Saul, he writes, was a tragic figure “because he lived at the same time as Samuel and David. Up against the rigid extremism of the one, and the magnetic genius of the other, he didn’t have a prayer.” David, on the other hand, was a leader with too much charisma—“a man who was loved by so many, a man who didn’t need to lift a finger to win the heart of others, which is why his emotional life became so distorted and corrupt.” Likewise, Shalev compares Elijah, “the consummate prophet, his entire being given over to the Lord’s service,” with Jonah, who would rather see a city destroyed than a blemish on his record for prophecy.

As a secular Israeli, Shalev regularly gives voice to his distrust of politicians, religion, and religious establishments, both ancient and contemporary. In this spirit, he does not refrain from critiquing the tenthcommandment, “Do not covet,” which is a prohibition not of an action, but of a feeling. “Everyone covets…. Everyone fails the last commandment,” he writes. “Thus, the biblical lawgiver made sure that no Jew would ever get a perfect ten in the test of the commandments. Nine is the highest score on the Jewish report card.”

By
Meir Shalev, translated from the Hebrew by Stuart Schoffman
Bonny V. Fetterman 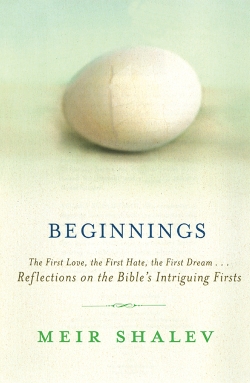