Many American Jews shuddered as Donald Trump proclaimed, “The American Dream is dead!” and “America first!” to rally crowds during his 2016 presidential campaign. We remembered how, in the late 1930s and early 1940s, these slogans were an open call for virulent anti-Semitism, pro-Nazi sentiment, white supremacy, xenophobia, and nativism.

Sarah Churchwell, a professor of American literature and humanities at the University of London, deftly deconstructs the origins and evolution of those two highly charged phrases in her new book Behold, America: The Entangled History of “America First” and “The American Dream” (Basic Books).

The term “The American Dream” first appeared in a 1900 editorial in the New York Evening Post, a newspaper founded by Alexander Hamilton and owned today by Rupert Murdoch. It warned readers that “discontented multimillionaires” constitute the “greatest risk” to “every republic” and threatened “The American Dream.” In its original context, the term represented a broad-based progressive aspiration for a just, equitable, and freedom-loving society.

As a literary exemplar of the original meaning of the American Dream,” Churchwell focuses on F. Scott Fitzgerald’s The Great Gatsby, writing that the famous novel laments the “trajectory…from a dream of justice, liberty and equality to a justification for selfishness and greed…betraying…[American] ideals.”

During the first half of the 20th century, the American Dream applied primarily to native-born, white, Anglo-Saxon Protestants of “Nordic stock.” By 1938, as Churchwell tells us, “ordinary Americans of all colours and creeds could see clearly, and were not afraid to admit, that the scourges of racism and anti-Semitism were fundamentally inimical to the American dream.”

Like other minorities, Jews wanted to embrace and be embraced by the American Dream. Churchwell cites the efforts of Rabbi Baruch Braunstein, counselor to Jewish students at Columbia University, who during the 1930s advocated that the way to achieve that goal was cultural and religious pluralism. He insisted:

“[The] Great American Dream does not consist of wearing down the cultures of various racial groups to a common uniformity…each single group has much to give of its own special tradition and culture.”

Churchwell believes the American Dream lost the high ground and became mired in “a sense of complacent entitlement that quickly turned resentful when easy [economic] promises weren’t fulfilled,” especially during the Great Depression.

She laments how the American Dream evolved from a quest for justice, liberty, and equality for all to a selfish quest for material possessions, economic power, and high status.

President Woodrow Wilson coined “America First” in defense of his isolationist policy during the early years of World War I. In the 1920s, it became a super-nationalist watchword, championed by the five-million-strong Ku Klux Klan, aimed to exclude Blacks, Jews, and Catholics from full participation as citizens. The Klan supported domestic fascism, fierce anti-Semitism, and ugly racism replete with brutal lynchings – all under the America First banner.

Churchwell meticulously describes the anti-Semitic America First leaders of the pre-World War II era, most notably aviator folk-hero Charles Lindbergh and Catholic priest Charles Coughlin. She reminds us they were not alone in their support of American isolationism, anti-Semitism, racism, and fear of immigrants.

It is chilling to read these words on page 254 of Behold, America:

“…. At its peak it [the America First Committee in 1940-41] had more than 800,000 members from across the political spectrum, including Walt Disney, Frank Lloyd Wright, E.E. Cummings, Lillian Gish and Henry Ford, as well as young students including Gore Vidal and Gerald Ford.”

The American First movement reached its zenith when Lindbergh delivered a well-publicized anti-Semitic speech in Des Moines, Iowa on September 11, 1941, less than three months before America entered World War II. Reflecting the views of the pro-Nazi German-American Bund, Lindbergh accused the “the Jews,” along with the British, of dragging the United States into war.

Four days after the Japanese attack on Pearl Harbor on December 7, 1941, Hitler declared war on the United States. On that day, the America First Committee officially disbanded and joined the war effort. In the decades following 1945, writes Churchwell, “‘America First’ remained a slogan of the underground Klan …”

Churchwell’s heroine in combatting the evils of America First and Lindbergh is Dorothy Thompson, whose syndicated columns between 1936 and 1958 in the New York Herald Tribune and 150 other newspapers reached 10 million readers.

Churchwell concludes with a warning. America must not be “a country that thinks it can dispense with history altogether, as if it is a handicap weighing us down, when in fact it is the common ground upon which we walk. Historical amnesia is certainly liberating, in one sense – but a knowledge of history can be emancipatory, too.”

Rabbi A. James Rudin is the former head of the American Jewish Committee’s Department of Interreligious Affairs and author of seven books, including Pillar of Fire: A Biography of Stephen S. Wise. 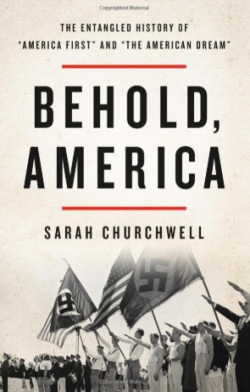