Book Review: Being Jazz: My Life as a (Transgender) Teen

By the time she was 3 years old, Jazz Jennings (not her original first name or her real last name) knew she was meant to be a girl. In her new book Being Jazz: My Life as a (Transgender) Teen, Jazz tells her story, including how she and her family became reality TV stars and outspoken advocates for transgender rights.

Though Jazz’s parents Jeanette and Paul, initially cautious but always supportive, set out to make their son's transition into their daughter as painless as possible, it quickly became clear that most of society had no existing protocols for supporting such a young child through the process of transition. At first, the Jennings family received tepid support and plenty of pushback from their children’s Jewish day school, where the principal agreed to allow Jazz to attend under the condition that she wouldn’t be referred to by any gender – essentially, as an “it” instead of a “her.” The Jenningses vehemently declined that offer, eventually convincing the school to allow Jazz to present as female (though the ever-controversial bathroom discussion continued for years before she was permitted to use the women’s restroom).

That was Jazz’s first encounter with bigotry, but it wasn’t her last. Though many of her friends were supportive and understanding, others bullied and abandoned her, both to her face and behind her back. Despite her significant athletic talent, she was prohibited from competing on an all-girls soccer team and endured a long battle with the sport’s governing bodies to allow her back on the field. And dating remained virtually impossible: “[Teen boys] were scared that if they were seen with me, or God forbid dated me, they’d be considered gay,” she writes.

But there are positive moments, too – and lots of them. Jazz writes of her time attending Camp Aranu’tiq, which runs overnight camp programs for transgender and gender-variant youth. She acknowledges that unlike so many trans youth, she is fortunate to have a supportive and loving family – so supportive, in fact, that her mother founded the TransKids Purple Rainbow Foundation. As a result of her advocacy, Jazz’s mother has been interviewed by Barbara Walters and Oprah Winfrey and won multiple, prestigious awards. Recently, President Obama himself requested her presence at the White House so he could tell her in person that he’s proud of her work.

Jazz’s memoir doesn’t speak much of her Jewish faith or background, aside from a few mentions of day school and holiday celebrations. In interviews, her mother has said that the family adopted a pseudonymous surname because it was easier – and safer – than using their “very Jewish, long last name.” And yet, in reading Jazz’s book, it seems clear that Jewish values played an important role in the acceptance and warm welcome Jazz has received from her local community. Her friends’ parents, mostly Jewish, are progressive and LGBTQ-friendly, teaching their children to be accepting of differences in others.

Reform Jewish views on transgender equality are also guided by the basic belief that all human beings are created b’tzelem Elohim, in the image of the Divine image. In November, the Reform Jewish Movement, led by the Union for Reform Judaism, became the first major religious denomination to adopt a resolution affirming the rights of transgender and gender-nonconforming individuals. Just last month, the Rabbinical Assembly, an international association of Conservative rabbis, approved a similar resolution. And across the continent, Jewish summer camps are changing and adopting new policies to more fully accommodate transgender campers throughout every step of their transition and their time at camp.

Today, Jazz is one of the country's youngest and most vocal advocates for transgender rights, and the entire Jennings family stars in the TLC show I Am Jazz. In her book, Jazz explains that they started the show not out of a desire for fame, but to publicly portray the normalcy of their everyday lives – to show that a transgender teen girl is, at the end of the day, just like any other teen girl.

In fact, it’s clear that Jazz’s memoir was written by a 15-year-old girl (or a ghostwriter who's really good at sounding like one), as it’s full of stories of characteristic middle school friendship drama, high school boy-craziness, and other dramatic coming-of-age anecdotes. But beyond the surface, it’s also a compelling first-person story about growing up trans in a world that questions trans women's womanhood. Above all, it's a true testament to the importance of a loving family. 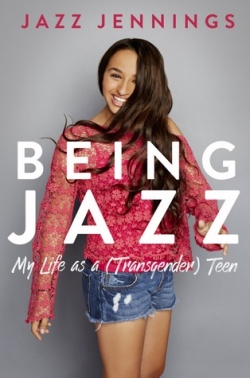