Though he never spent more than eight weeks on a script, Hecht succeeded in creating crackling dialogue and fast-talking characters. The French-Swiss film director Jean-Luc Godard called Hecht “a genius who invented 80 percent of what is used in Hollywood movies today.” Indeed, Hecht worked on nearly 200 films, sometimes without credit, including Gone with the Wind, Roman Holiday, A Farewell to Arms, The Front Page, Spellbound, Notorious, A Star Is Born, Wuthering Heights, Gunga Din, Stagecoach, Strangers on a Train, Duel in the Sun, and Scarface.

Born on New York City’s Lower East Side in 1893, Hecht moved at age 10 with his immigrant parents to Racine, WI. Following high school graduation, he headed for Chicago, where he became a brilliant newspaper reporter in the years before World War I. His journalistic experiences, especially in bars, brothels, and boarding houses, found expression in his classic stage play The Front Page, adapted later as a film.

In 1926, Hecht received a telegram from his friend, screenwriter Herman J. Mankiewicz, that would change his life:

“Will you accept $300 per week to work for Paramount Pictures? All expenses paid. The three hundred is peanuts. Millions are to be grabbed out here and your only competition is idiots. Don’t let this get around.”

Hecht accepted the invitation (the monetary offering would’ve been the equivalent of $4,210 today), and although he claimed to hate Hollywood’s values, he soon became Tinsel Town’s highest-paid screenwriter.

Cynical about politicians and humanity in general, Hecht never involved himself in the left-wing politics that were prevalent in Hollywood during the 1930s. He also considered himself thoroughly American and eschewed synagogue attendance – but the rise of Nazism and impending threat to Europe’s Jews shattered his indifference.

His embrace of a Jewish “cause” came as a surprise to his family, friends, and probably to himself. It was sparked by his anger at President Franklin Roosevelt for refusing to liberalize the quota system that severely limited the number of Jews refugees desperately seeking entry into the United States.

In 1940, Hecht met Peter Bergson, a 25-year-old Palestinian Jew whose real name was Hillel Kook. A nephew of the Ashkenazi chief rabbi of British Mandate Palestine, Bergson was a member of the Irgun, a Revisionist Zionist group that advocated direct political and military action to rescue endangered Jews, expel British forces from Palestine, and establish an independent Jewish state. Among Bergson’s mentors was Irgun leader and future Israeli prime minister, Menachem Begin. Attracted to the Irgun’s call to action, Hecht used his writing skills for the cause, including full-page ads in the New York Times and other major newspapers demanding immediate action to rescue Europe’s Jews.

Hecht scripted two Zionist-driven historical pageants that attracted more than 100,000 people in New York, Washington, and other cities. DC audiences included Eleanor Roosevelt, Supreme Court Justices, and numerous members of the US Congress. Hecht had personally recruited Hollywood celebrities to appear in these pageants, including film stars Marlon Brando, Paul Muni, and Edward G. Robinson (who spent a year as a rabbinical student at Hebrew Union College before turning to acting), and composer Kurt Weill, a refugee from Nazi Germany.

Adina Hoffman recounts an acerbic phone conversation between Hecht and Wise, following the rabbi’s insistence that he be brought in to “advise” Hecht and Bergson on the appropriate way to alert the American public and FDR about the dangers of Nazism. Irritated by the sonorous vocal tones of the famous rabbi, Hecht later wrote, “I have never known a man with [such] a …voice who wasn’t either a con-man or a bad actor.” Hoffman reports that Hecht hung up on the world-famous rabbi.

The brash writer was equally at odds with Israeli Prime Minister David Ben-Gurion, President Chaim Weizmann, and the entire ruling Israeli “establishment” because of their bitter enmity toward what they regarded as the Irgun’s radical leadership and extremist tactics.

Despite his commitment to the Irgun and its philosophy, Hecht never visited Israel. After 1948, he lost interest in the cause, and went back to writing a series of brilliant screenplays until his death in 1964.

Menachem Begin attended Hecht’s funeral service at Congregation Rodeph Shalom in Manhattan. His tribute was on point:  “Ben Hecht wielded his pen like a drawn sword.”

By
Adina Hoffman
Review by
Rabbi A. James Rudin
Image 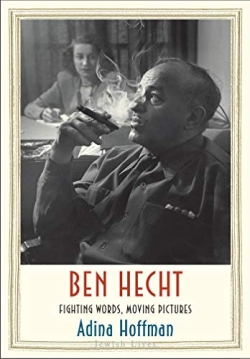