Fiction writer Edith Pearlman came to the attention of a broad readership when she was awarded the PEN/Malamud Award for short story writing in December 2011. In the same year, her third collection, Binocular Vision, was selected as a finalist for the National Book Award and featured on the front page of The New York Times Book Review. But for the 75-year-old Brookline-based author, so recently “discovered” by critics and compared to some of America’s finest fiction writers, it was far from a literary début. She had already spent decades honing her art, publishing her stories, and winning numerous awards. Her “discovery” is actually ours.

There is something refreshingly pure in Pearlman’s stories, in addition to the exquisitely calm and precise storytelling. When facing fateful moments of decision, her characters tend to act with intelligence, integrity, and compassion. Her stories reflect two streams of inspiration: a New Englander’s practical idealism and a Jewish instinct to bless each moment.

In “Day of Awe,” Robert Katz visits his son Lex, a single homosexual social worker who lives and works in a Central American country. Lex is planning to adopt a child with learning disabilities and take him back to the States. Robert’s visit coincides with Yom Kippur and he spends the day reflecting on how to be a grandfather to this child who will soon be “a Katz, Jaime Katz,” part of his family.

Three WWII-themed stories (“If Love Were All,” “Purim Night,” and “The Coat”) take us from the outbreak of war to its immediate aftermath, as seen through the eyes of Sonya Sofrankovitch, an American woman in her mid-50s. When war breaks out in Europe, she surprises her friends by taking a job working for the Joint Distribution Committee with Jewish refugees in London; at the war’s end, she signs on for another stint, working to help survivors in a DP camp in West Germany. “Purim Night” takes place at DP Camp Gruenwasser, where Sonya, now co-director, is exhausted and constantly stressed by the shortages of practically everything at the camp. Nevertheless, when the Purim holiday celebration begins, she finds herself awed by the survivors’ eager embrace of a shared moment of optimism.

Other stories explore a variety of modern Jewish encounters. In “Chance,” an American Jewish congregation receives a Czech Torah scroll from an obliterated community. “The Story” describes two sets of in-laws, one Jewish, one not, who meet for an awkward dinner at a restaurant. In “Relic and Type,” an elderly Jewish man in Boston studies Japanese in order to talk to his grandson in Kyoto and discovers the Japanese teacher is a convert to Judaism.

“Binocular vision” generally means seeing through two eyes and combining images from different angles for depth perception. Many of Pearlman’s characters are able to see themselves through two lenses—how others see them and who they know themselves to be—and choose actions closest to their truest selves. 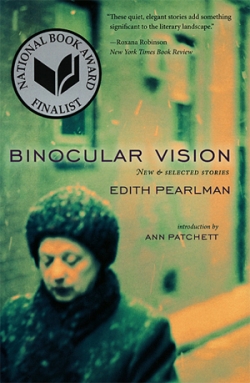