Book Review: The Book of V

The lives of three fiercely driven women intersect and overlap through time and space in Anna Solomon’s enthralling new novel.

The Book of V begins in present-day Park Slope, Brooklyn, with Lily reading her young daughters the story of Esther in preparation for the Purim carnival. Lily rushes through the story because it’s bedtime, and she’s impatient with the story, anyway:

“Really all you need to know, and all anyone ever remembers anyway, is that the second queen, Esther, is the hero.”

Lily, 46, is married to Adam, who used to be married to Viri. Lily gave up her career so Adam could pursue a plum job opportunity. Influenced both by her feminist mother, Ruth, and the stay-at-home moms pushing strollers in Park Slope, Lily struggles to define herself:

“[Lily] is too old to still believe that she’s going to somehow wind up being someone she hasn’t already become. She is not a writer or a professor or a singer-songwriter or an adulteress, she is, by choice, a second wife and mother and homemaker … if she is not Esther precisely (Esther saves her people; who—whom—is Lily supposed to save???) she will be Esther in spirit. The heroine.The second but lasting queen. A natural, if not terribly sexy, beauty. A virtuous, if not mysterious, wife.”

The story shifts to Washington, D.C., in the early 1970s, when the scandals of Richard Nixon were unfolding and “a veil of distraction fell over the capital’s swampy fortress and a lustiness took hold, an appetite for drink and women uncommon even among that time and people.”

Senator Alexander Kent of Rhode Island is known for his wild parties and good scotch. His wife, Vee, came from political royalty herself and is the dutiful wife who manages the household and serves as hostess of the legendary parties. She endures her husband’s sexual forcefulness, even knowing that spousal rape is “a thing” from the women’s group she attends once a month.

When Alex humiliates her for the final time in front of a room of political bigwigs, she flees to the home of her childhood friend Rosemary, married to Philip, who is Jewish:

“Vee has met Philip twice, and though what Rosemary said about him is true—he appears modern, and doesn’t strike a person as religious—he does have an obviously dark, foreign appearance… Rosemary is brave, Vee thinks, dabbing a bit of lipstick that’s bunched on her top lip. But that doesn’t rule out the possibility that her marriage was a mistake.”

From Washington, D.C., we are transported to a palace in Persia, surrounded by brown tents belonging to a community of wanderers. The year is 462 BCE. We meet Marduk, uncle of a 17-year-old orphan named Esther, who lives with him and his family. When the palace announces a search for a new queen, Marduk delivers an unwilling Esther to the palace gates. Detained in a waiting area along with dozens of primping women, she is subjected to a seemingly endless array of beauty treatments:

“They don’t just soak in oil for a few hours, or exfoliate their heels with razor blades, or spend days practicing the art of hair towers. They spend months doing these things, scraping and scrubbing, oiling and perfuming though it’s never clear, on any given day, if this will be the day that the king at last wants to see them.”

Unlike the other girls, who are desperate to catch the king’s interest, Esther yearns to be set free. As we know from the Biblical story, the king is smitten by Esther’s natural beauty and chooses her over all the others.

Solomon deconstructs and embellishes the Esther story, interjecting a bit of magical realism. In a departure from the traditional story, Solomon’s Esther is not deferential but bold, with unusual abilities, like a superhero. Repulsed by the king, who is portrayed as a passive dishrag of a man, Esther stealthily lays out a plan to save her people.

In parallel stories, beautifully told in Solomon’s magnificent prose, Lily, Vee, and Esther all share a common thread of self-discovery. Each stands on the precipice of revelation as she resists being defined and diminished by men. Each is poised to shake off the yoke of male domination and traditional women’s roles.

Although there are several V’s in the book, I suspect the V in the title refers to Queen Vashti, once married to the king but banished for not providing his highness with an heir. The traditional telling of the story has no use for Vashti after her banishment, but Solomon sees it differently.

With its engrossing blend of historical and contemporary fiction, The Book of V is certain to find its rightful place on the bookshelves of feminist literature. 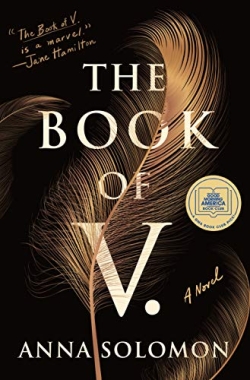