Book Review: Catch-67: The Left, the Right, and the Legacy of The Six Day War

Micah Goodman has been called “Israel’s philosopher” and “a prophet of the nation’s angst.” A first generation Israeli, he is the president of Beit Midrash Yisraeli-Ein Prat, an intensive Jewish learning program for young secular and religious Israelis, and a senior fellow at the Shalom Hartman Institute in Jerusalem. His embrace of diversity and commitment to helping others find meaning in their lives can be attributed, in part, to his mother, who came from a pious Catholic family and  converted to Judaism, and to his growing up in an Orthodox Jewish household in Jerusalem.

His newest book, Catch-67: The Left, the Right, and the Legacy of The Six Day War (Milkud 67) – a play on Joseph Heller’s iconic Catch-22 – topped Israel’s non-fiction bestseller list for many weeks, and an English translation has been published by Yale University Press.

The book examines the ongoing national debate over whether to keep the land Israel conquered in the Six-Day War 50 years ago or to return some, if not all, to the Palestinians. Goodman suggests that while Israelis care about such issues as taxation, socioeconomic inequality, and the relationship between religion and state, these issues rarely determine how they vote. Israelis back the parties that represent their positions in the ongoing conflict between Israel and the Palestinians. He says that one cannot understand Israel today without understanding what this debate is all about.

Polls have shown for years that a majority of Israelis would willingly end military control over the lives of millions of Palestinians on the West Bank in order to ensure Israel’s future as an internationally accepted democratic state with a Jewish majority. At the same time, they distrust the Palestinians and fear that a withdrawal would pose a major security threat.

After thoroughly examining and explaining both positions, Goodman argues that either option – remaining in the West Bank or leaving it – would spell the end of the Zionist project. “The Israelis in the center,” he says, “are not between the right and left. They are both right and left. That’s why we are so perplexed.”

That is the “catch” in which Israel finds itself.

Goodman’s three previous Israeli bestsellers, including Maimonides and the Book That Changed Judaism: Secrets of “The Guide for the Perplexed,” dealt with ancient Jewish texts. In Catch-67, he suggests that a lesson can be drawn from a first-century dispute recorded in the Talmud between the House of Shammai and the House of Hillel:

Goodman’s hope in publishing Catch-67 is that both sides of the debate over Israel’s future will come to hear each other.

Suggesting that a true peace may never be possible, Goodman proposes some alternatives. He tells his fellow Israelis that they may need to lower their expectations of war or peace and move from a politics that attempts to change reality toward a politics that finds a way to live with it.

His goal is to encourage Israelis to reflect on their own arguments with the hope that by doing so, they will stop trying to win the political debate and instead try to heal the political environment  that is mired in a zero-sum-game mindset.

Though written for an Israel readership, this book is a must for anyone who wants to understand the tectonic forces underlying Israeli politics. 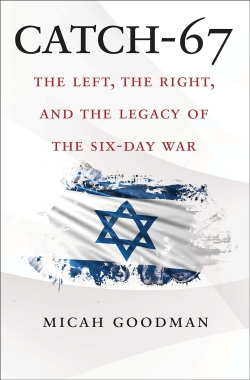