Growing up in the years following the founding of the State of Israel, I, like so many of my generation, was taught that the new Jewish state was the fulfillment of a utopian dream: a Jewish homeland after almost 2000 years of exile. It would be a refuge for persecuted diaspora Jews and its governance guided by Jewish values.

Our assumption was, and still is, that Israel would be a Jewish state, where Jews could protect themselves, and would finally feel safe. The pictures I saw in my religious school classes of chalutzim (Zionist pioneers) – robust men and women in very short shorts dancing the hora – convinced me that a Jewish utopia had been created in the land promised to my biblical ancestors thousands of years ago.

I am much older now and, hopefully, much wiser. Israel is not, and probably never was, utopia.  And, I have discovered, my understanding of “utopia” as it relates to Israel is not shared by others.

In his fascinating book, Contested Utopia: Jewish Dreams and Israeli Realities (Jewish Publication Society), Marc Rosenstein – an American Reform rabbi who made aliyahaliyahעֲלִיָּה"Going up." The honor of being called to recite the blessings before and after the Torah reading. Also refers to immigration to Israel, to "make aliyah" to Israel; plural: aliyot. Lit. "Ascent." some 30 years ago and is the former director of the Israel Rabbinical Program at Hebrew Union College-Jewish Institute of Religion in Jerusalem – examines the Jewish state through the lens of Jewish utopian thought from its biblical beginnings to modernity. He argues that the collective memories, desires, hopes, and faith of the Jewish people converged to envision an ideal life in the Land of Israel.

Rosenstein points out that if one were to take a poll of Israelis and Diaspora Jews as to what the ideal Jewish state would be, what they say they want cannot exist in one place: an ethnic nation-state that is a paragon of social justice; a hospitable state with a powerful defense force that welcomes the stranger; a modern democratic state in which religious officials exercise a dominant role with borders believed to be divinely ordained.

Rosenstein spends a good portion of the book showing how contradictory utopian visions of the Jewish state have been a constant in Jewish history: conflicting descriptions in Torah, the diverse views of the early proponents of Zionism, the ever-changing visions of Israel’s leadership and citizens, and the conflicting views of diaspora Jewry.

Among the most common of these endless debates is the question: Should Israel be “a Jewish state” or “a state of all its citizens”? The first represents the kind of a nationalistic utopia, the nation state where every Jew belongs to the nation, akin to being one big family or community. In Rosenstein’s words, “This is the state where we can just be us, where it's just Jews and everybody's Jewish, unlike in America, where only a small minority is Jewish.” In an Israel that is the state of all its citizens, Jews are in the majority and Jewish culture reflects that reality, but no one group is favored over the other. Everyone has equal rights and, hopefully, equal protection under the law.

In a recent interview, Rosenstein said

“I think the point of the book is to say we have to be conscious of the fact that we walk around with these different visions and we have to understand that it's not a zero-sum game, that I can't have a state that's only a Jewish state and therefore it's not a state of all citizens. But I also can't have a state which is a totally cosmopolitan and liberal and where there's nothing Jewish about it, because neither of those are options for us. Ultimately, it is a question of balance. As a liberal Jew living in Israel that balance is critical.”

Thus, the challenge Rosenstein presents for those who call themselves liberal Jews is to understand how the disparate utopian visions collide in the attempt to establish policy and practice regarding such issues as Sabbath observance, social welfare, immigration, the use of land, and the Israel-Diaspora relationship, to name a few.

The balance among these (and others) has always been uneasy, messy, and a constant work in progress.  Liberal voices need to be heard in the ongoing conversations about Israel’s future – a future that may not be utopian, but one in which Israel is a modern, enlightened, pluralistic democracy that protects the rights of all its citizens and, at the same time, continues to be a vibrant place where the best of Jewish culture thrives.

Want to learn and read more about Israel from a Reform perspective? Subscribe to Israel Connections, our Wednesday email (part of the Ten Minutes of Torah series) 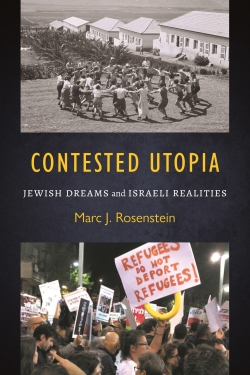