Ben Katchor, an American cartoonist and illustrator best known for his critically acclaimed comic strip Julius Knipl, Real Estate Photographer, begins The Dairy Restaurant (Schocken Books, 2020) with the Garden of Eden story. He speculates whether Adam and Eve were the world’s first vegetarians, and we follow his journey through time to America’s ubiquitous Jewish dairy restaurants – and their ultimate demise.

With his humorous illustrations on nearly every page, Katchor presents an extraordinary range of facts, from the curative properties of milk and vegetarianism to the reason Jewish religious law prohibits consuming meat and milk together to the origins of the first public restaurants in France. He also explains why dairy products are linked to the spring Jewish harvest festival of Shavuot, and he gives a shout out to Sholom Aleichem’s most famous fictional character, Tevye the Dairyman.

Dairy restaurants, especially in New York City, expanded as millions of Jews arrived on our shores from Eastern Europe between 1882 and 1924. These eateries were believed to be healthy, sanitary, and affordable alternatives to venues that served meat and poultry.

In 1919, Meybakh’s, a kosher eatery located at 751 Broadway near 8th Street, ran an ad in a Yiddish newspaper that succinctly captures the attraction of dairy restaurants:

“…We are open for business. The best fresh foods served at moderate prices. All that we bake, cook and fry is with the best fresh butter. Careful observers of kosher dietary laws and cleanliness will by us be satisfied. Closed Shabbos and holidays.”

Many dairy restaurants were not strictly kosher and subject to rabbinical oversight; instead, they relied on the U.S. Department of Agriculture for supervision of their dairy products. In 1914, one Jewish dairy restaurant introduced a combination meat-and-cheese sandwich that still bears the owner’s name: Arnold Reuben.

Dairy restaurant became popular gathering places for Jewish immigrants who were eager to escape their cramped living spaces. Because dairy cuisine was generally served cold, people could sit at the tables longer than patrons of kosher restaurants and delicatessens that served hot beef, lamb, and chicken dishes.

Leo Tolstoy’s rhapsodic writings about bucolic life and the wholesome food of the countryside, as well as Leon Trotsky’s positive view of vegetarianism, influenced many dairy devotees. Dairy restaurants like The Garden on New York City’s Lower East Side became a public arena where Jews of every political type fiercely argued with one another while feasting on cold borscht and cheese blintzes.

Katchor provides whimsical cartoons about such renowned dairy restaurants as Ratner’s on Manhattan’s Second Avenue, an area that once housed so many Yiddish language theaters that it was called “The Jewish Rialto.” One illustration shows four, sad-faced biblical figures in flowing robes looking at the depressing sign in Ratner’s window: “Retail Space For Rent.”

Not content to limit his book to Jewish dairy eateries, Katchor treats us to an illustrated history of the modern restaurant. He notes that after the French Revolution shattered aristocratic society, the public began to experience dining in establishments that featured fine china, cutlery, and linen tablecloths. With separate private tables, along with a menu that offered a variety of food choices, the “restaurant” was regarded as place to restore one’s health and vitality. Each customer’s selection was prepared to order and individually served. Included on most French restaurant menus were dairy products, especially cheese and cream – the basic components of many soups, main courses, and desserts.

As a rabbinical student at the Hebrew Union College-Jewish Institute of Religion in Manhattan, my classmates and I often ate at Famous, the dairy restaurant located at 222 West 72nd Street. Famous was small in size compared to the better-known Garden and Ratner’s restaurants, but if you wanted to greet Nobel Prize-winning author Isaac Bashevis Singer, Famous is where you would likely find him; he was a regular until his death in 1991.

One of my favorite Famous meals was a bowl of steaming mushroom and barley soup, accompanied by mounds of freshly baked onion rolls that immediately appeared when I sat down at a table. My preferred main course was two very large pieces of gefilte fish (a combination of carp, pike, and whitefish) in a sea of delicious gelatin surrounded by chopped carrots. The dessert was always the same: a large slice of wondrous cheesecake.

Sharing the fate of many other dairy restaurants in New York City that outlived their once large customer base, Famous shuttered its doors in 2017. A hair salon now occupies the space that was once a dairy paradise – but The Dairy Restaurant is a lovely way to revisit such once-beloved spaces.

By
Ben Katchor
Review by
Rabbi A. James Rudin
Image 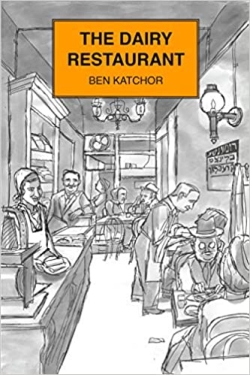