Book Review: Defending Israel: The Story of My Relationship with My Most Challenging Client

Although he was a supporter of Barack Obama, Dershowitz ultimately broke with him because he believed the president “engineered” a “pernicious” anti-Israel United Nations Security Council resolution in late 2016. However, Dershowitz backed Hillary Clinton’s bid for the White House and has opposed efforts to impeach President Trump. He seems to enjoy being unpredictable in staking out provocative positions.

He is not, however, unpredictable on matters involving Israel. In his new book, Defending Israel: The Story of My Relationship with My Most Challenging Client (All Points Press), Dershowitz underscores his love affair with and his passionate defense of the world’s only Jewish state: “There was never a time that Israel was not part of my consciousness.”

The 80-year-old lover of Israel describes his youthful attraction to Zionism and, after 1948, his commitment to the survival and security of the newly independent Jewish state. He grew up in an Orthodox Jewish family in Brooklyn, attended Yeshiva University High School, Brooklyn College, and graduated first in his Yale Law School class. For many years he was a distinguished Harvard Law School professor.

Dershowitz has visited Israel more than 100 times, and he savors his “endless fight” against Israel’s perceived enemies and detractors, whether on the left, such as Vanessa Redgrave, who he calls “an active propagandist” for the Palestine Liberation Organization, or on the right, such as the late Rabbi Meir Kahane, the founder of the Jewish Defense League. Dershowitz writes: “Kahane would say…‘There is nothing Jewish about democracy.’ I beg to differ.”

Dershowitz delights in describing himself as “Israel’s single most visible public defender…the Jewish state’s lead attorney in the court of public opinion.” To back up that claim, he reminds readers he has publicly defended Israel in many hostile surroundings, including well-publicized debates at more than 55 universities and colleges. In addition, Dershowitz has written a plethora of books and op-eds on the subject.

He insists, however, that “Criticism of Israel is not only not anti-Semitic, it is healthy, if it doesn’t violate my friend Anatoly Sharansky’s three Ds…demonization (of Israel) when comparisons are made between Israelis and Nazis…the second D is the test of double standards. Where criticism of Israel is applied selectively…the third D…is delegitimization when Israel’s fundamental right to exist is denied….”

His latest book reveals: “Shortly after Benjamin Netanyahu was elected to his second term as (Israeli) prime minister, he made me an offer that gave me an existential identity crisis. He urged me to become Israel’s ambassador to the United Nations.”

Dershowitz was tempted to accept the offer because “…nothing would have given me more personal or professional pleasure than to stand in the well of the United Nations and defend the nation-state of the Jewish people against the defamation and blood libels that are spewed out daily in that chamber of hatred…” Dershowitz turned down the invitation because he felt an American Jew representing Israel at the UN “…would raise the specter of ‘dual loyalty,’ a charge frequently made by Israel’s enemies against American Jews who support Israel.”

At the end of his book, Dershowitz analyzes the threat Iran represents for Israel. He notes the Iranian leaders ominously proclaim that Israel is a “one bomb country.” That is, the belief that a single nuclear weapon would destroy the majority of Israel’s population. And even if the Jewish state was able to retaliate with its own nuclear response, against the much larger Iran, that nation could absorb great losses to achieve the “annihilation” of Israel and “…nearly half of the world’s Jewish population.”

To prevent that catastrophe, Dershowitz bluntly asserts that Israeli (and American) “…statesmen and stateswomen must be prepared for a costly preventive war to avert Iran from securing a nuclear arsenal.”  Clearly, Israel’s “public defender” has shifted from his comfort zone of legal and debate rhetoric to the much more dangerous realm of high stakes global politics and national security issues.

One can only speculate where the prolific Alan Dershowitz will go next in his public defense of Israel. 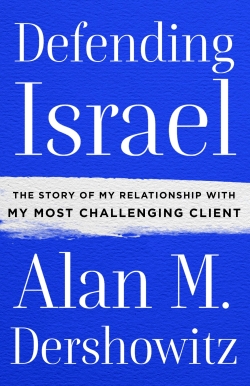