Defining Israel: The Jewish State, Democracy, and the Law (HUC Press) is a dense, essential volume for anyone who wants to unpack the maze of documentation and thought at the heart of the foundation of the State of Israel.

Since its founding in 1948, the state has not had a formal constitution. Rather, it relies on two different documents that have recently become contradictory to one another. The first is the often-quoted – but not legal – Declaration of Independence, penned by the founding fathers, including David Ben Gurion and Moshe Sharett, with lofty language representing an aspirational and liberal ideal for the Jewish state that includes the word “equality” and a passage regarding rights for minorities.

The second is the collection of laws known as the “Basic Laws” of the state, passed in the Knesset in a rather air-tight voting formula that makes them difficult to dismiss. On the last day of  its session in 2018, the governing body, led by Prime Minister Netanyahu, ran a frantic campaign to pass a new Nation-State law. The new law overrides much of the sentiment from the Declaration of Independence, promoting the Jewish nature of the state over equality and, in fact, doesn’t mention equality at all. Also under the law, Arabic is downgraded in status as a language; Shabbat is enthroned under the purview of the state-controlled rabbinate; and Jewish settlements and Jewish symbols are enshrined.

Some have argued that the consequence of this law is largely symbolic and that nothing will change. In fact, this legislation already has changed Israel – and not necessarily in ways its supporters had hoped it would. Reaction has been swift, among both the small but influential left and those fighting for religious pluralism. The law also has been attacked by leaders of Israel’s Arab minority, which represents 22 percent of the population.

More than simply attacking the law, there’s been impact. For instance, in mid-November of 2019, the city of Tel Aviv – after three surrounding cities initiated a similar project –  instituted a  fee-free public bus service on Shabbat for Tel Aviv and surrounding cities. Even as Shabbat is enshrined in the new law, the non-fundamentalist Jewish populations in Israel increasingly are fighting back, and laws like this one won’t change their determination, but likely will strengthen it.

Similarly, and perhaps more consequently, Israel’s Arab citizens responded by going to the polls. In fact, the Joint Arab List, led by MK Ayman Odeh, was the only party or list to actually significantly increase its numbers from one election to the next.

This collection of essays is a go-to reference book detailing ramifications of the Nation-State law and the still unsettled debate about how Israel balances being a Jewish state with being a democratic state. The volume primarily represents a liberal viewpoint, with all the authors opposing the law but offering differing opinions on its consequences and how to respond to its passage. From longtime Likud Party member Benny Begin to Hadash Party MK Yousef Jabareen, this volume includes a diversity of voices within the anti-nation-state law camp that differs profoundly on a vision of the future Israeli state.

The authors also differ on what to do next. Noted legal scholar Ruth Gavison, although not a supporter of the law, sees its passage as largely symbolic, arguing  that to try to rescind it makes no sense:

The struggle should at least in part be directed towards strengthening aspects of the reality of Israel rather than just the text of its laws, and there are many that support and reinforce Israel as a state committed to democracy and human rights as well as to Jewish self-determination.

Other Jewish scholars writing in the collection view the law’s passage with more alarm. Among them is Rabbi Michael Marmur, former provost of Hebrew Union College-Jewish Institute of Religion and associate professor of Jewish theology at the college’s Jerusalem campus. He states that passage of this law is “evidence of the [Zionist] project’s crisis.” He names the law to be “chauvinism masquerading as particularism,” in an impassioned essay investigating what the State of Israel is as a civic state, but what it means to be Jewish – whether in a parochial, fundamentalist view or a pluralistic, universalist model. Marmur proposes a “light” Jewish model, heavy on democracy with a secular-state viewpoint. However, by passing this law, the state is moving in exactly the opposite direction.

Israel Bartel, too, lays this trajectory out with great passion. An iconic figure among Israeli academics, he is professor emeritus of Jewish history and former dean of humanities at Hebrew University. A self-described member of the “first-born” generation of the modern Israeli state, he says that the Declaration of Independence was an “inspirational” document to his generation, and one that must be built upon. Indeed, there is a campaign to be waged not only to finally create an Israeli constitution, but also to enshrine the words of the Declaration of Independence within a constitutional framework.

Supporters of the nation-state law, including Likud Party members Avi Dichter and Yariv Levin and ultra-right-wing MK Bezalel Smotrich (whose attempt to enshrine Jewish biblical law over civil law in the legislation was overturned) present support or opposition to the law as a fight between Zionists (them) and anti-Zionists (everyone else).

But it is much more complicated than that. To confine the debate about this law simply to debating Zionism leaves out an important segment of the Israeli public – the very segment that the law was meant to ostracize.

The Palestinian scholars (who are citizens of Israel) writing in this volume – the well-regarded Tel Aviv University professor Amal Jamal (who also is a former chair of Tel Aviv University’s political science department) and MK Jabareen – are not Zionists nor should they be expected to be. But as citizens of Israel they represent the 22 percent of Israelis who are disenfranchised by the nation-state law.

And, even within Zionism, there are critical differences regarding what Zionism means, especially how it has come to be used by the ultra-right ruling Israel under Netanyahu.

As Bartel so eloquently states:

The turbulent struggle between the supporters of the right-wing versions  of the nation-state law, including in its final form, and their opponents is by no means a confrontation between Zionists and anti-Zionists (which is how the spokesperson for the Israeli nationalist right seek to portray it). Rather, this is a confrontation between the supporters of classic Zionism at its best – those who view the Declaration of Independence an exemplary Jewish-Zionist achievement and a milestone in the annals of world democracy (even if the word ‘democracy’ isn’t mentioned in the Declaration’s text!) – and those who have forgotten, or perhaps never knew, what Zionism is.

Concluding by calling the nation-state law a “stain in the pages of  Zionist history,” Bartel lobs a challenge to all of us who care about Israel to engage in the shaping of its future.

Jo-Ann Mort is a writer and consultant specializing in Israel.

Jo-Ann Mort is the former special advisor to the president of the Union for Reform Judaism. 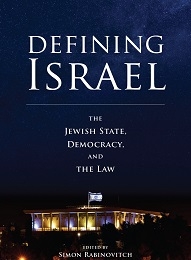