Book Review: The Dollmaker of Krakow

Young adult Holocaust narratives aren’t too hard to find. Prisoner B-3087, Refugee, and The Boy in the Striped Pajamas are among the many novels striving to broach a challenging subject for a teen or tween audience. Because children and teens were profoundly impacted by the events leading up to and during World War II, sharing a story from their point of view is a natural entry point for a reader of the same age.

R. M. Romero’s novel, The Dollmaker of Krakow, may be the first to tell a familiar story from the point of view of a doll. Karolina, the diminutive protagonist, has a body created by the eponymous doll maker, Cyryl Brzezick, and a spirit imported from the Land of the Dolls, whose utopian, sugar-coated peace has been shattered by an invading army of rats. When her carved form comes to life, coaxed by the dollmaker’s previously unknown magical ability, she enters a Poland not yet invaded by Germany, but beginning to feel the chill of its long shadow.

Karolina quickly reveals her ability to move and talk to Brzezick, and together they befriend a Jewish family – a young girl named Rena and her musician father. Germany soon invades Poland, and the story unfolds according to history. The one notable twist is the use of magic by both Nazi and resister.

The German officer stationed at the Krakow ghetto possesses magic power like the dollmaker’s, though he employs it to twist and corrupt – changing a butterfly into a spider and killing a firebird opposing the Nazis. The conflict also draws in Polish folkloric figures that aid the resistance or provide comfort for the victims. One, the Lakanica, is the spirit of the meadow that would become the Auschwitz-Birkenau killing ground.

Magic and mysticism often work their way into Holocaust stories, usually fueled through Hitler’s rumored explorations into the supernatural. Hellboy and Indiana Jones and the Last Crusade both tread this grimly entertaining territory. In The Dollmaker of Krakow, the abilities of both the doll and the German officer to bring life to inanimate objects and transform living people and animals into toys provide opportunities for complex, deus ex machina rescues of Jewish children, and connect both the dollmaker and the officer to Karolina’s Land of the Dolls.

The narrative’s two noble Jewish characters, Rena and her father, draw Karolina and Brzezick into the war, when they might otherwise have quietly waited it out – Brzezick’s leg was amputated after a war injury, and he could have been content selling his toys and doll houses, which the occupying forces sent home to their children as souvenirs. But he, like Karolina, couldn’t ignore the plight of their Jewish friends, who were forced from their homes into the ghetto in advance of deportation to a concentration camp.

Karolina and Brzezick paid a price for their involvement with the Jews of Krakow. The story’s end is predictable, yet made especially poignant as Karolina, alive but not strictly mortal, silently observes the horrors of Auschwitz-Birkenau as she waits for her physical form to disintegrate so she can return to the Land of the Dolls.

The Dollmaker of Krakow breaks new ground in a familiar and tragic narrative. For adolescent readers, the fantastic elements of Romero’s novel will be an enticing entry point into an important and emotionally challenging topic. 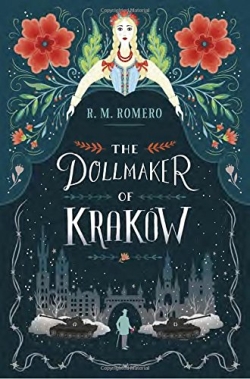