Elie Wiesel is generally known as a famous Holocaust survivor and author of the book Night. In his succinct new biography, Elie Wiesel: Humanist Messenger For Peace (Routledge), Professor Alan L. Berger brilliantly portrays his former teacher and Nobel Peace Prize winner as a global champion of universal human rights who had an extraordinary impact on contemporary American political, religious, and cultural life.

Berger, the chair for Holocaust Studies at Florida Atlantic University, recounts Wiesel’s early life in the small Romanian village of Sighet in the Carpathian Mountains and how his father urged Eliezer to read the world’s classic literature while his mother pressed him to engage in intensive Torah study in the broadest sense of the term. That parental combination shaped Wiesel’s career as a gifted author who wrote in French and English (neither was his native language) while being fully anchored in both Hebrew and Yiddish.

Wiesel survived the Shoah as a teenage prisoner at two infamous Nazi German death camps: Auschwitz in Poland and Buchenwald in Germany.  His immediate family was shattered during the Holocaust. Both his parents and one of Wiesel’s three sisters were murdered. When World War II ended, the orphan made his way to Paris, learned French and began a career as a journalist. In 1949 Wiesel became the Paris correspondent for the Israel newspaper Yediot Ahronot.

A major turning point in Wiesel’s life occurred in 1954, when he interviewed Francois Mauriac, the Catholic Nobel Prize winner for literature. Mauriac urged the young survivor to write about his death camp experiences.

Wiesel achieved global fame with his powerful Holocaust memoir, Night, first published in Yiddish in Argentina with the title Un di velt hot geshvign ("And the World Remained Silent"). With the help of Mauriac, the book was published in France in 1958, and the English version appeared two years later. Night has been translated into 30  languages and Mauriac’s introduction appears in each edition.

Before his death in 2016, Wiesel published 56 more books, a staggering number for an author who survived the daily trauma of confronting death, physical torture, and starvation in Nazi killing camps.

Berger captures the heart of Wiesel’s post-Shoah religious conviction: “…one could be with God or against the deity, but not without God…ever since Auschwitz he had been trying to find an occupation for God…[who] wouldn’t listen.”

Berger describes many of Wiesel’s extraordinary journeys throughout the world - Darfur, South Africa, the former Soviet Union, Latin and South America, and Southeast Asia as a self-appointed emissary for human dignity, social justice, and universal peace. All the while, his commitment to the State of Israel was paramount in his life. Wiesel’s  winning the Nobel Peace Prize in 1986v was the culmination of Wiesel’s campaign for world peace.

In addition to his advocacy work and prolific writing, Wiesel was a professor for nearly forty years at Boston University, a husband to Marion, father of their son Elisha, and grandfather of Elijah and Shira.

President Jimmy Carter appointed Wiesel the first chair of the Holocaust Commission that was key to the creation of the United States Holocaust Memorial Museum in Washington, DC.

His indelible place in American history was secured in 1985, when Wiesel, in the presence of Ronald Reagan, spoke truth to power by urging the president to cancel a planned visit to a German military cemetery that contained graves of Nazi SS troops: “Mr. President: That place is not your place.”

The author provides footnotes, an index, and bibliography, making the book useful in many educational settings, including synagogues and churches.

Berger appropriately gives the last words to Wiesel:
“I still believe in man in spite of man. I believe in language even though it is wounded…and I continue to cling to words because it is up to us to transform them into instruments of comprehension rather than contempt. It is up to us to choose whether we wish to use them to curse or to heal, to wound or to console.” 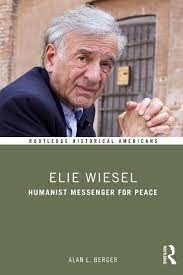