Book Review: To the End of the Land

The Israel National Trail, a 600-mile path from Dan to Eilat, is a popular hike for Israelis who want to experience the natural terrains and diverse communities of their country. Recently divorced Ora, the emotional center of David Grossman’s new novel, had plans to hike the northern portion of the trail with her younger son, Ofer, to celebrate the completion of his army service. At the last moment, however, Ofer re-enlists in order to join his unit in a major military operation. Ora has a bad feeling about the mission and rebels in the only way she knows how—by making sure she would not be home to receive the “official notifiers” if they come to tell her that Ofer has been killed. Engaging in a form of magical thinking, she believes that by keeping her son constantly in mind, she can protect him from harm. Ora decides to go on the hike with Avram, Ofer’s biological father, and spend the week telling him about the son he never met.

With this novel, Grossman, one of Israel’s most distinguished writers, sets out to depict the personal landscape of family, children, and friendships in Israel against the background of ha-matsav, “the situation,” which is how Israelis refer to the existential anxiety of the political/military reality in which they live. But the matsav is not just in the background; it pervades all of Israeli life.

The three friends whose lives frame this novel—Ora, Avram, and Ilan— meet as teenagers during the 1967 war. Later, in the army, Avram and Ilan “draw straws” for Ora, the tall, statuesque redhead with whom they are both in love. In 1973, during the Yom Kippur War, Avram and Ilan serve as intelligence officers on the Sinai Peninsula. Ilan is the last one to hear Avram’s frantic radio transmissions before the Egyptians overrun his base.

Avram is captured and tortured in Egyptian prisons and returns to Israel broken in body and spirit. Ora and Ilan, now a couple, take care of him, taking turns visiting him in the hospital every day. In one of Ora’s desperate attempts to restore Avram’s will to live, she makes love to him and Ofer is conceived. So close are these friends that Ilan adopts Ofer and the couple raise him as their son, along with their first child, Adam. After years of rehab, Avram recovers enough to live on the margins of society as a waiter in small Jaffa café.

Twenty years later, her marriage to Ilan ended, Ora is hiking the Israel Trail with Avram. Silver-haired and middle-aged, Ora is still Ora—a talkative, nurturing “earth mother,” generous and self-centered, obsessive and unable to keep her thoughts to herself. She describes seemingly small episodes, going back and forth in time. She tells Avram about her happy family life and especially about Ofer—a child so sensitive that he became a vegetarian at age 4, when he discovered where “meat” came from, and at 10, cured his older brother Adam from obsessive-compulsive behavior by volunteering to do his bizarre rituals for him. Now, her gentle son is a soldier fighting—where?

Slowly, subtly, a larger portrait emerges in this exquisitely crafted novel in which every detail matters. On their hike, Ora’s telling meanders, as Avram discreetly tries to steer her around memorials to fallen soldiers that dot the land, and they repeatedly get lost. Only now and with great effort does Ora piece together the events that led to the collapse of her marriage and estrangement of her sons.

Ora recalls the moment when the matsav became too much for her. The family was having dinner at a restaurant to celebrate Adam’s birthday—Ofer was on leave from active duty—when the men started talking about their experiences as soldiers: “Ofer told them casually that the suicide bomber who had blown himself up two weeks earlier at the central bus station in Tel Aviv, killing four civilians, had probably passed through his roadblock—meaning, the roadblock his battalion was responsible for. […] Ilan swallowed and said, ‘You know what? I’m glad he blew himself up in Tel Aviv and not on you at the roadblock.’ Ofer was outraged: ‘But Dad, that’s my job! I stand there precisely so they’ll blow themselves up on me and not in Tel Aviv.’” Meanwhile Ora listens to their conversation in shock and horror. What was happening to her son? How could her country’s leaders require this sacrifice—from him, from her?—without at least trying to find another way? How could they accept the status quo that she can barely live with another minute?

Grossman began writing this novel in May 2003. It was almost complete when his younger son, Uri, was killed in the Second Lebanon War on August 12, 2006, just hours before a cease-fire was declared. The shadow of grief is inseparably linked to this novel that gives voice to every Israeli parent’s fears. Grossman’s literary masterpiece, hailed as one of the most important anti-war novels of our generation, makes its case with enormous power and clarity. 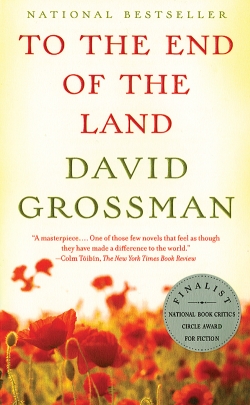