Protecting children from harmful news is a natural parental instinct, but matriarch Esther Adler goes to extremes in Florence Adler Swims Forever, a novel based on a real-life incident in author Rachel Beansland’s family.

In 1934, Atlantic City, N.J., was a business community on the rise, supported by the vacation industry and the influx of immigrants from Europe. Small neighborhood hostels gradually gave way to booming hotels as the country rebounded from the Great Recession.

Joseph and Esther, a middle-class Jewish couple who owns a thriving family bakery, rent their house to vacationers each summer to earn extra income, themselves taking up residence in the small quarters above the bakery. Beanland’s accurate depiction of Jewish life at the Jersey shore, with iconic landmarks and street names liberally referenced, will strike a chord in anyone familiar with the area.

As the story begins, their younger daughter Florence, an award-winning swimmer, comes home from Wellesley for the summer. She is determined to spend the next two months training to swim the English Channel and beat the record time set by Olympic swimmer Trude Ederle.

Florence’s sister, Fannie, is on bed rest at the local hospital awaiting the birth of her third child. Frannie and her husband, Isaac, have a 7-year old daughter named Gussie; their infant son died shortly after his birth. Out of concern for a high-risk pregnancy, Fannie’s doctor insists that she be hospitalized for the duration. Bored and yearning for company, Fannie misses seeing her father, who never sets foot in the hospital, and her husband, who always seems to be busy with something. Florence visits Fannie but parts without saying goodbye after the sisters have a spat.

Soon after, Florence drowns in the ocean during a practice swim. Horrified onlookers watch as the beach patrol hoists her body into the lifeboat and brings it back to shore. Despite their resuscitation efforts, she is pronounced dead at the scene. Doubled over with grief, Esther pictures her vulnerable surviving daughter in the hospital and somehow has the presence of mind on the spot to forbid this tragic information from reaching Fannie.

Esther swears each family member to secrecy and convinces the editor of the local newspaper to keep Florence’s name out of the news. She tells the rabbi there will be no public funeral or shiva minyan.shivaשִׁבְעָהSeven-day mourning period that begins on the day of burial. She even instructs the lifeguards to refrain from answering questions about the death they witnessed.

Joseph pays for Fannie to move into a private room at the hospital and orders the staff to keep newspapers, the radio, and the telephone away from his daughter. Meanwhile, Fannie grows more and more concerned about why Florence has not come to visit her and wonders if her sister is still stewing over their spat. Fannie’s blood pressure begins to rise, alarming her doctor.

The tension builds as each character struggles with the deception. In addition to those already mentioned in the story, other characters include Anna, a young refugee from Nazi Germany who is taken in by Joseph and Esther, and a lifeguard friend of Florence’s. Although Gussie does not take a turn in the narration, she is often in the company of those who do. The family’s neglect of her is one of the saddest parts of the story.

Explanations are continually embroidered whenever Fannie grows suspicious. When visiting her in the hospital, Esther keeps her emotions uncharacteristically low-key – but like bubbles popping to the surface, family secrets can be submerged for only so long.

This is a wrenching story in its own right, and the vision of blissful vacationers on the beach offers a stark juxtaposition, not just to the drowning of a young woman but also to what we readers know is about to happen in Nazi Germany.

As implausible as the plot might sound, I think of my own family, secret-keepers themselves, who might have done the very same thing. When we read at the end of the book what actually happened that summer of 1934, we gain an appreciation for Rachel Beansland’s desire to honor the memory of her Great Aunt Florence by writing this book. 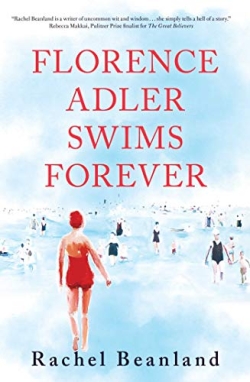