Book Review: Following Ezra: What One Father Learned about Gumby, Otters, Autism, and Love from His Extraordinary Son

As a former senior writer for People magazine, veteran journalist Tom Fields-Meyer has a flair for telling human interest stories. In this memoir, he tells a more personal story—that of Ezra, one of his three sons, who was diagnosed with autism at age three. His account of raising this bright and lovable child whose world he can gradually and only sometimes access is honest, moving, often humorous, and always engaging. While we learn a lot about autism and how autistic individuals experience the world, we never lose sight of Ezra as a unique personality with his own special strengths and ongoing challenges.

When Ezra’s preschool teachers mention behaviors that Tom and his wife, Rabbi Shawn Fields-Meyer, have already noticed, they visit a family therapist who gives them some terrible advice. “You have to let yourself grieve for the child he didn’t turn out to be,” she tells them. “I’m not going to grieve,” Tom immediately responds, deciding instead “to pour love on my son, to celebrate him, to understand, to support him, and to follow his lead.” Over a ten-year period, Tom’s growing ability to see the world through Ezra’s eyes enables father and son to communicate and form a strong bond. Sometimes Ezra lets Tom teach him things, like basic social skills, but much remains hidden about Ezra that tends to catch his parents by surprise, often in good ways.

While Ezra has been able to recognize letters and spell words from an early age, no one knows if he is reading with comprehension. Tom gets his answer when Ezra sets off the fire alarm at their synagogue when Yom Kippur services have concluded and people are filing into the reception hall to break the fast. Amid the confusion of people rushing outside with their bagels and juice, Tom asks why Ezra has touched the red alarm box. “It said, ‘Pull Down,’” Ezra innocently responds. Tom admits to “feeling at once exasperated and tickled: My son can read.”

Like the noted animal scientist and autism advocate Temple Grandin, Ezra is fascinated by animals and loves to visit the zoo; it is the one place where all his anxious mannerisms disappear. On one such trip with his grandfather, he suddenly volunteers an astounding array of facts about each species that he has memorized from his wildlife encyclopedia. His extraordinary memory soon becomes evident in the addresses and dates he recalls, as well as facts he has memorized on topics that interest him, from breeds of dogs, to cartoon characters, to the release dates for every animated Disney film ever made. “I come to relish my periodic, precious glimpses into the extraordinary ways Ezra’s mind makes sense of the world—particularly when he shows flashes of his powerful and unusual memory,” his father writes.

Ezra is fortunate to have parents who are open to nurturing all his interests as possible venues for more social interaction. He has benefitted from his experiences in the Jewish community—a Jewish summer camp for special-needs children, afternoon Hebrew school classes, and regular attendance at Sabbath services with his parents and brothers.

When Ezra decides he wants a bar mitzvah, his mother helps him learn to chant his Torah portion and his father helps him draft his speech, but Ezra selects the topic: “I want to talk about being autistic…How it’s not bad, it’s good,” he tells his parents. At Ezra’s bar mitzvah, his parents, family, and the entire congregation marvel at the dvar Torah, the speech of the young man on the bimah, and his father watches in awe as the boy who once seemed so alone greets every guest and thanks them “for being here to celebrate my future.” (Postscript: Ezra, now a 15-year-old high school student, has published an illustrated children’s book, E-mergency, with coauthor Tom Lichtenheld, to rave reviews.) 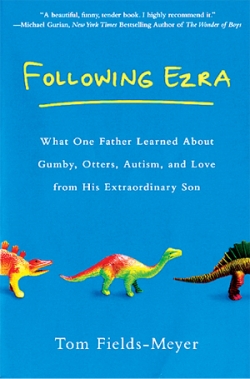