Last month, Jews around the world woke up to the news that a group of Reform Jewish leaders in Jerusalem for the ordination of the 100th Israeli Reform rabbi was treated harshly by security guards as they carried Torah scrolls onto the plaza in front of the Kotel, the Western Wall of the Temple Mount. This action followed the government’s suspension of an agreement made between the prime minister and the liberal movements of Judaism that would have created a permanent egalitarian prayer space near the Wall. It appears that the relationship between the government of Israel and the majority of Diaspora Jews has reached a new low.

How, then, are liberal Jews to relate to the “Jewish homeland” when they feel unwelcome and discriminated against by the authorities?

The editors of The Fragile Dialogue: New Voices of Liberal Zionism are well positioned to explore the varied ways rabbis, scholars, activists, and students approach one of the most polarizing issues facing the North American Jewish community – today’s Zionism. Rabbi Davids served as chairman of the Association of Reform Zionists of America (ARZA) from 2004-2008 and Rabbi Englander is immediate past chairman of the world-wide progressive Zionist organization, ARZENU.

They sat down with me to discuss this timely collection of essays.

Robert Orkand: What was the motivation behind the book and why now?

Stanley Davids: Three polarizing events have made it extraordinarily difficult for Jews to speak comfortably with each other about Israel: the 2014 Gaza War, the 2015 Iran nuclear deal, and the 2016 elections in America. We Jews are in the process of ripping our community apart, while turning off Jewish millennials and college students. We need a demonstration, a public indication, that liberal Jews legitimately can and do hold widely divergent views regarding Israel and modern Zionism. This book will be an entry point for those interested in a civil and informed discussion about our differences.

Lawrence Englander: Even before 2014, Jews, especially on the progressive side of the spectrum, had been searching for a comfortable space to publicly express their relationship with Israel without being shouted down. We imagine the book as a room with a table surrounded by many chairs and an open door welcoming people, especially those who are committed to Israel but concerned, to have a conversation.

What criteria did you choose in selecting the book’s 20 contributors?

Davids: We were looking for younger men and women from Israel and the Diaspora whose political views range from the very liberal left to the very liberal right. The only disqualifier was not supporting the existence of Israel as a Jewish, democratic state.

What surprised you the most in what the contributors wrote?

Englander: Several of the authors argued in a certain direction, but stopped before reaching a conclusion, perhaps because the ramifications were just too painful to express. For example, one author had seriously considered living in Israel but decided against it due to the current political situation.

Davids: I found it surprising to learn from rabbinic students who felt that other issues are far more important and pressing for their congregants than Israel, such as rediscovering Judaism’s spiritual roots and shaping liberal Judaism into a more effective force for social change in North America. One author from our movement comes close to embracing the need for the BDS movement (Boycott, Divestment, Sanctions) to help Israel save its soul, and another embraces the concept of a one-state solution.

At the same time, more than a few writers challenged North America’s Reform leaders to be more forceful in mobilizing support for Israel and our Progressive institutions there, and in promoting a stronger commitment to contemporary Zionism as part of our liberal Jewish identity. For the sake of Israel’s future, our authors did not hesitate to assert the right of Diaspora Jews to question Israel’s actions and commitment to democratic and Jewish values. And they felt too much was at stake to simply stand by and witness actions and decisions by the Israeli government that might be seriously detrimental to Jewish life outside Israel.

What are some of the takeaways from these essays?

Englander: First, we are fighting for Israel’s soul, and that is why this conversation is so critical right now. Second, we need to open a dialogue between Diaspora and Israeli Jews. I think we are growing further apart. To dig down and see where our commonalities lie, we first need to understand our cultural differences.

Davids: I would add that for Israelis, the security issue is always present. We cannot underestimate their existential fears, and Diaspora Jews need to be mindful of that when criticizing Israelis.

Another takeaway is that community building requires humility, a willingness to listen and not to judge. You cannot engage in real dialogue without committing a priori to being open to the possibility that you might need to change your point of view or position.

Most of all, we need more listening and less yelling. 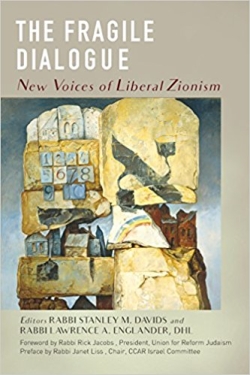