Nicole Krauss' novel, a National Book Award finalist, reminds me of Mahler's symphonies—complex, filled with borrowings, emotionally intense—and ultimately rewarding the reader's close attention. Less driven by plot than personality, this novel presents four unrelated individuals who attempt to explain their lives in the aftermath of a great loss.

The connective tissue that holds their testimonies together is the temporary ownership of a massive antique desk. Nadia, a novelist in New York, acquired the desk from a Chilean poet, Daniel Varsky, who subsequently "disappeared" under General Pinochet. Twenty-five years later, she surrenders the desk to an Israeli woman claiming to be Varsky's daughter, but immediately regrets this act and goes to Jerusalem to find it again.

Varsky had been given the desk by Lotte Berg, a German-Jewish writer in London. Her story is narrated by her husband, Arthur Bender, an Oxford professor who cared for her through years of Alzheimer's (shades of Iris Murdoch and John Bayley). Arthur,a devoted husband, always respected Lotte's need for privacy and solitude, but after her death he explodes with jealousy over the secrets she kept from him.

George Weisz, an antiques dealer, is also searching for the desk, which once belonged to his father, a Jewish historian in prewar Budapest. It is the last missing piece in the recreation of his father's study that he has assembled in his present home in Jerusalem; meanwhile, his children in London live in a virtual storehouse of heavy, dark furniture collected by their absent father.

Finally and most moving is the testimony of another Israeli father—Aaron, who sold Weisz his house in Beit Hakerem. Aaron regrets a conflicted relationship with his younger son, which does not show any signs of repair after his wife's funeral.

These confessional monologues describe that moment of fissure when identities disintegrate in response to loss. Surprisingly, Krauss introduces another response to absence: the first-century rabbi, Yochanan ben Zakkai, who founded the school at Yavneh—known as the "Great House"—after Jerusalem and the Temple were destroyed. The compiling of the oral tradition, begun at Yavneh, which ultimately became the Talmud, is the paradigmatic Jewish response to catastrophic loss: the creation of a portable homeland in words.

In telling the story of Yavneh to Arthur Bender, Weisz unknowingly frames questions that mirror the other characters' experiences with identity crisis in the wake of loss—"What is a Jew without Jerusalem? How can you be a Jew without a nation? How can you make a sacrifice to God if you don't know where to find him?"—but their responses have not yet moved beyond the shock of loss to the moment when reinvention of self begins. 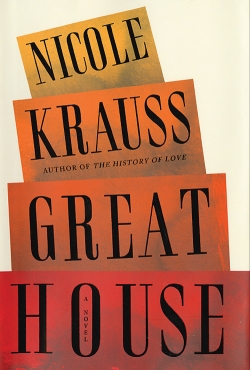