In his fifteenth book, The Great Shift: Encountering God in Biblical Times (Houghton Mifflin Harcourt), Professor James L. Kugel offers a theory to explain why ancient and modern peoples experience God in such profoundly different ways. He delivers a scholarly tour de force that is also accessible to the general reader.

Kugel argues that Abraham, Joseph, Moses, the Hebrew prophets, and other ancient people possessed a “semipermeable mind” that was receptive to seeing, hearing, and meeting the Divine Presence. He asserts that such contacts, which allowed for direct, personal contact with God, take place within the “fog of self,” a dream-like quality most modern people lack.

The Israelites of Scripture, he says, felt they were part of a collective entity open to experiencing the divine; in contrast, moderns tend to be a collection of spiritually closed individuals, ill-equipped to encounter God. Kugel laments that our biblical ancestors’ openness to-meet God attribute has shifted into “…oddly stunted and closed-off organs, which today are scarcely aware of their tiny opening to the Outside [God].”

He finds solace in the observation that “the basic elements of the human encounter with the divine are still with us, even as its reality is sometimes denied.” This is possible, he writes, thanks in part to “the reconfiguring of what was once the semipermeable mind, [of the ancients].”

Kugel, himself, is a bundle of ironies and contradictions. Born 72 years ago in New York City, his original Sephardic last name, Kaduri, morphed into Kugel, a favorite Ashkenazic baked noodle or potato casserole he finds “stomach-churning.”

He is an observant Orthodox Jew who takes an intellectually critical view of the Bible. In a 2014 Moment magazine interview, Kugel said he always cautions his students, “If you come from a religious tradition upholding the literal truth of the Bible, you could find this course disturbing… People are always distressed when you tell them… the way they’ve been thinking about it was wrong.”

“My own view,” writes Kugel, “is that modern biblical scholarship and traditional Judaism are, and must always remain, completely irreconcilable Many people, he claims, “are simply doing the best they can to have it both ways, to have their Bible and criticize it too.”

His brilliant teaching style has been described as “Woody Allen in a state of grace” with touches of irreverence and wit, sometimes drawing more than 900 students to his Hebrew literature classes at Harvard University.

He made aliyah (moved to Israel) with his wife Rachel in 2003 and currently teaches at Bar-Ilan, an Orthodox-oriented university that aims “to blend tradition with modern technologies and scholarship…and to synthesize the ancient and modern, the sacred and material…”

The Great Shift is a carefully crafted literary work that is both an indictment of modernity and a hope that tightly closed modern people can regain the unique “semipermeable” qualities that defined spiritual lives of long ago.

Kugel concludes with the optimistic words: “And it’s not over yet” in the human quest to encounter God.

Rabbi James A. Rudin is the American Jewish Committee’s Senior Interreligious Adviser. His most recent book is Pillar of Fire: A Biography of Rabbi Stephen S. Wise. His website is jamesrudin.com. 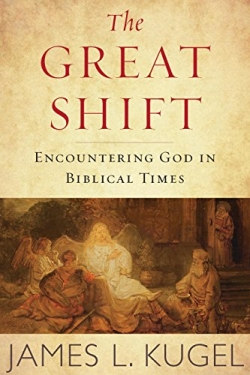