At his trial, White ’s lawyers claimed his mental capacity was diminished as a result of severe depression, and he was convicted of voluntary manslaughter. Two years after his release from prison, White committed suicide in 1985.

Since those murders, the mists of legend have enveloped Milk, who had served as supervisor for only 11 months before his murder at age 48. A 2008 film bears his name as does a New York City high school. Time magazine included Milk on its list of the hundred most influential individuals of the 20th century, Barack Obama awarded him the Presidential Medal of Freedom posthumously in 2009, and the U.S. Postal Service issued a stamp in his honor in 2014.

Yet many people still know little about Milk, who wrote presciently:  “If a bullet should enter my brain, let that bullet destroy every closet door.”

In her new book, Harvey Milk: His Lives and Death (Jewish Lives, Yale University Press), Lillian Faderman, a distinguished scholar of LGBT and ethnic history, gives us a multi-dimensional picture of the martyred activist’s “lives and deaths.”

Milk’s grandfather, an immigrant from a Lithuanian shtetl (small village), owned a Long Island department store and changed the family name from “Milch.” Harvey, born in 1930 in Woodmere, New York, recognized his homosexuality at age 14, but hid his sexual orientation. In college, he was an athletic  “jock” on the track and wrestling teams, and after graduating, served as a U.S. Navy officer during the Korean War. His specialty was deep sea diving.

After teaching high school math for a while, Milk became a Wall Street securities analyst. On weekends, he traded his Brooks Brothers suits for jeans and a t-shirt, and headed for Greenwich Village, where he had a series of gay relationships.

In 1964, Milk supported presidential hopeful Barry Goldwater; the Republican’s call for non-intrusive government interference into personal lives and Goldwater’s libertarianism resonated with him.

After he left his Wall Street job, Milk grew a beard, mustache and ponytail. His friends said he resembled a “Jewish Rasputin.” Milk became an actor and assistant to Tom O’Horgan, who achieved fame with his hit Broadway musical, Hair.

In reading Faderman’s book about Milk, I was reminded of two fictional characters: Philip Roth’s Alexander Portnoy and Saul Bellow’s Augie March, though neither was gay. Milk had Portnoy’s sexual appetite and March’s tendency to bounce around from one episode in life to another. Not until he was 40 did Milk finally discover his calling in life as a political activist and public official.

Throughout his life, Milk perceived himself as a double outsider: a gay man and a Jew. His political foes derisively labeled him a fast talking “New York Jew.” Milk was haunted by the Holocaust and the fear that virulent bigotry in the United States could lead to widespread lethal attacks on gays and Jews.

In 1970, he and his long-time lover, Scott Smith, moved to “The Castro” section of San Francisco, which had become a center of gay life and culture. Milk, always in need of money, opened a photo shop that became his schmoozing center and de facto political headquarters. The store, however, provided little or no income, and Milk was constantly short of money. Even when he was elected to the Board of Supervisors in 1977, Milk was paid only $9,600 a year (about $38,000 in today’s dollars).

Faderman reminds us that as a public official, Milk was not only a champion of full civil and human rights for gays, but also was a strong public advocate for San Francisco’s fire fighters, police officers, Teamsters, and longshoremen. As a result, the openly gay official enjoyed electoral support from the city’s trade unions.

He successfully opposed Anita Bryant’s anti-gay campaign and legislative attempts in California to discriminate against homosexuals. In addition, he was an adversary of the San Francisco gay “establishment” community for being content with public support from heterosexual political leaders.

While Faderman’s 283-page book presents Milk in Cromwellian terms – warts and all – he remains an iconic gay leader for millions of Americans. Harvey Milk has permanently entered history as a martyred symbol of hope for minorities in the U.S. and a fierce foe of anti-Semitism and all other forms of bigotry and hatred.

Not a bad legacy for a fast-talking gay Jewish kid from Long Island. 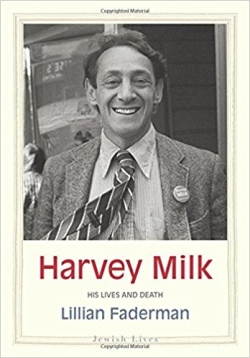