The amplification of women’s voices has become an idee fixe of modern social media. Rightfully so. If anything has become clear since the 2016 presidential election and the recent #metoo exposure of rampant sexual assault, it’s the necessity and relevance of feminism in our society.

But for today’s fourth-wave feminists, an awareness and appreciation of the great forward leaps made by the second-wave feminists of the 1960s is imperative to maintain historical perspective and inform future action. Marcia R. Rudin’s historical novel, Hear My Voice, does just that.

Rudin chronicles the lives of three women who followed the call to religious service: Mona Sullivan, a nun; Elizabeth Adams a Presbyterian pastor; and Sandra Miller, a rabbi.

Mona’s traditional Catholic family finds her decision righteous and supports her; in contrast, Liz and Sandy face familial and systemic obstacles in their path to ordination. Although Liz’s husband Tom Hagerman, also a Presbyterian pastor, supports her education and vocation, he maintains the status quo in their joint appointment to a Reno parish by keeping her engaged in more “feminine” aspects of the church, such as leading youth programs and Sunday school.

The Hagermans were deluged with dinner invitations from their new congregants. Everyone was eager to meet the new pastor and his wife. “New pastor and other new pastor,” Liz said to Tom. “Don’t they get that?” …They divided up their responsibilities. Liz would run the Sunday School and Wednesday night adult bible study group…the exploratory committee looking into establishing a pre-school and work with the lay chairs of the book review and adult education committees.…Tom would do most of the personal counseling, hospital and home visits to the ill, and conduct the worship services, baptisms, confirmations, weddings, and funerals.

Sandy’s father, her rabbi, and her high school sweetheart all are disdainful of her rabbinical aspirations, each for a different reason: her father can’t understand her religious leanings, her rabbi can’t envision a woman on the bimah, and her boyfriend isn’t Jewish and doesn’t understand her devotion.

Sandy wrote to Hebrew Union College-Jewish Institute of Religion in Cincinnati and told them she wanted to apply to rabbinical school. By this time Sandy had told her parents of her wild dream. Helen [Sandy’s mother] was surprisingly supportive, but warned her she’d probably not be able to follow her unusual career choice. Leon Miller was appalled, or at least pretended to be. “You do know religion is all hogwash,” he reminded his daughter. “Rabbis don’t have mysterious magical powers. This ordination stuff is all nonsense. Laying on of hands. In the twentieth century. It’s all magic. There are other ways you can transmit our Jewish culture, if that’s what you want.”

That these women pursue their career choice despite opposition from such close quarters is a radical act. Though fictional characters, their stories closely align with their real-life contemporaries, including Sister Ann Gillen and Rabbi Sally Priesand, who appear as beacons of inspiration in the book.

In pursuing their social justice callings, the three women cross paths in the Soviet Jewry struggle. It’s interesting that Rudin seizes on this issue, only touching on the racially driven civil rights issues of the 1960s and 70s. Indeed, Hear My Voice is notably non-intersectional, as its only characters of color are Sandy’s live-in nannies. While one character discovers in adulthood that she’s a lesbian, her identity is overshadowed by her desire to keep her position, and she ends the first loving relationship she’s ever known. As a fourth-wave feminist, I found some of Rudin’s choices somewhat unsatisfying, but they make sense for the period covered in the book: the late 1980s and early 1990s. The novel’s dialogue is at times stilted, yet I found the stories of these women who struggled for self-actualization against religious, inherited, and secular patriarchal attitudes compelling.

Though women today still suffer from workplace discrimination, normalized harassment, and wage inequality, the women who paved the way for our increased mobility and entry into every imaginable career path deserve to have their stories revisited. 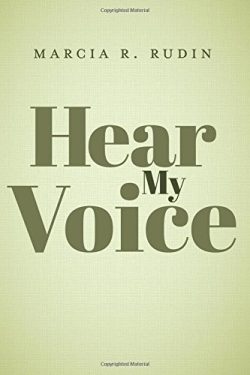